Clemson caps its two game road trip on Saturday as the Tigers head up to the Commonwealth for a game against the white meat. Below we'll examine how the two teams match up based on their depth charts and what the "experts" thought about their players coming out of prep school.

As bad as Virginia looks on the football field, this week's data really surprised me. Virginia appears to have a good bit more talent (again, based on the criteria outlined above) than most of our ACC foes. Clemson holds a modest --compared to other ACC schools not named Florida State--lead over UVa on offense and defense (0.20 and 0.30 stars per player, respectively). The specialists category (which saw no UVa kicker ranked, thus virtually included only skills players) boosted the Virginia rankings a bit and the Wahoos ended up only 0.15 stars per rated player behind Clemson. I'll let you look at the data and form your own opinions--though you potions of this data clearly indicates that Virginia (as most perceived) is bringing in talent despite their on-field results. 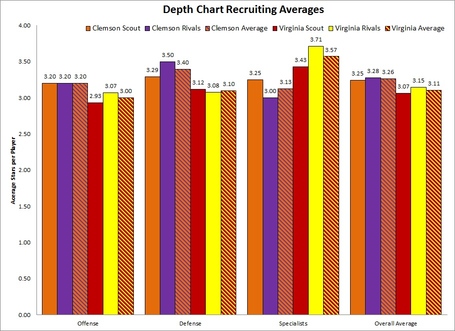