The Tigers head up to New York this weekend to play ACC newcomer Syracuse in their dome. Today we'll compare depth chart talent between the two schools.

We'll compare Clemson/'Cuse talent levels based on officially released two-deep depth charts. Depth charts for both teams were attained DIRECTLY from the Clemson website (www.clemsontigers.com). A pdf version of this can be found there as well. I will go ahead and tell you that because of injuries and depth chart adjustments between the release of this information and game time, some items here may be a little out of place but in an effort to maintain consistency, I'll use both teams' depth charts as presented on the official website.

Clemson again easily covers this week's opponent's talent based on the criteria listed above. Clemson is 0.71 stars per player better than Syracuse on offense, 0.92 on defense, and 0.62 on special teams per the provided two-deep charts. This correlates to an overall Clemson advantage of just over three quarters of a star per player. 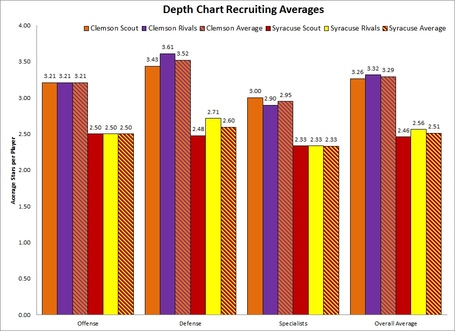