Clemson has been the clear-cut leader when we've compared recruited talent against our opponents this season (sans, obviously, Georgia). Today we get to take a gander at one of the three schools (UGa, FSU, USC) on the 2013 Clemson regular season schedule that can match up with our Tigers on a pure recruited talent basis.

This week's comparison differs greatly from previous weeks as our Tigers are pretty much blanketed on all fronts when we compare recruited talent with the Seminoles. Florida State is over a half star per two-deep player better than Clemson on both offense and defense and hold a 0.6 stars per player advantage on special teams. The data can be seen below but the highlights for the Seminoles includes approx. Three and three quarters stars per player on offense and an even four star per player average for the FSU defense. If you assume that the recruiting experts' opinions are important, this team and coaching staff has definitely recruited a boatload of talent over the past couple years. 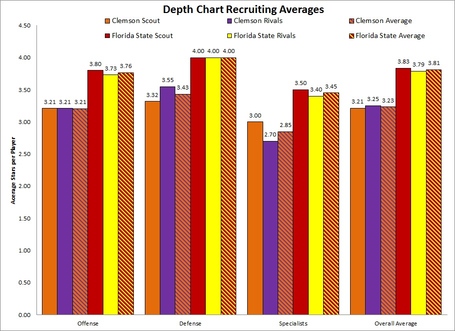