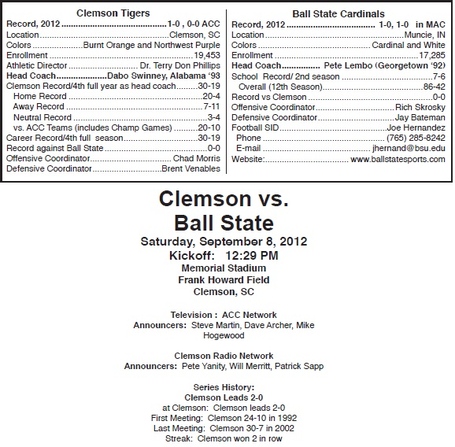 Ball State and Clemson have a brief history of early season games between the two schools. Their first meeting was a lackluster 24-10 win by the Ken Hatfield-led Tigers. We all thought that Clemson was just looking ahead to their first conference meeting (and first home night game in many, many years) against FSU and was using the season opener to work on things and keep it simple. The next meeting (and last to date between the schools) was another ho-hum performance, this time a mid September contest. There really is little else to say about the history between these teams. Of note, Oklahoma and current Clemson defensive coordinator Brent Venables drubbed BSU 62-6 during the '11 season.

Now, we'll discuss the current stats of Clemson/Ball State. Team leader statistics are available below (info courtesy www.espn.com). These do, however, only reflect performance in one game so far for both teams. 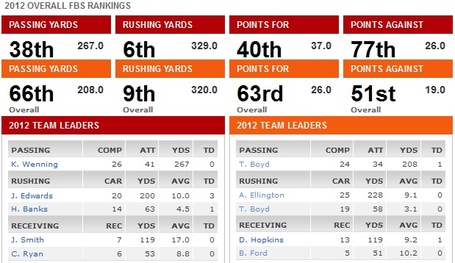 Ball State is led by second year head man Pete Lembo. Lembo led the Cardinals to a 6-6 record a year ago and a season opening 37-26 win over Eastern Michigan to begin the '12 campaign. Lembo was an offensive lineman at Georgetown and has previous head coaching stints at Lehigh and Elon. His Lehigh teams won two Patriot League titles (44–14 overall, 26–7 conference at Lehigh) and made the playoffs once at Elon (35–22 overall, 24-14 in conference).

Lembo brought his entire staff from Elon to Ball State. An interesting figure on his staff is offensive coordinator Rich Skrosky. Skrosky brought a no huddle spread offense to the table at BSU. The offense, which was implemented by the staff in its first year last season, returns seven starters. These guys should be fairly far along the learning curve at this time and I don't expect to see many of the silly mistakes one would see when implementing a new attack. Many media sources I've checked this week spoke highly of Lembo as a coach and person who is able to connect/relate to players while improving production. Here is an example.

The Clemson coaches commented earlier this week that the Tigers will benefit from practicing against Clemson's HUNH in the offseason. One has to believe that, regardless of the actual offensive strategy employed by the Cardinals, Clemson's defense will be much better prepared for the pace of play Ball State will try to attain and should not have as many substitution issues due to Cardinals' lack of huddle. Also, Venables studied this team a year ago and OU was extremely successful. Everyone had questions last week regarding what to expect from the Auburn offense. There are considerably fewer unknowns this week which should mean we will see less guessing out of the Clemson defensive staff. Let's be perfectly clear, though. The Ball State offense, while featuring many spread formations, is multiple and these guys will show quite a few formations. This is something to think about as you watch the game, substitution patterns, and number of snaps logged.

The Cardinals feature junior QB Keith Wenning under center. In his lone game this season, Wenning passed for 267 yards on 26/41 passing. He had no interceptions nor touchdown passes. Last season he completed 64% of his passes for nearly 2800 yards with 19 TD passes and 11 Interceptions. Interestingly, Wenning needs approximately 125 yards through the air to become 5th all-time in Ball State history. His key receivers are Jamill Smith and Connor Ryan. Smith had 119 yards receiving last week. On the ground, Jahwan Edwards is the man. He averaged 10 ypc last week, gaining 200 yards and scoring three touchdowns. Edwards is coming off a 786 yard 11 touchdown year last season. Improving the running game and getting more big plays here was a big focus going into this season.

Defensively, Ball State was hot garbage one season ago. They show a 4-3 but, like the other teams we'll see this year, will bring in the nickel to counter Clemson's spread formations. The Cardinals gave up 500 ypg. Coming into this year, they lose two safeties. Last week they gave up 366 total yards to Eastern Michigan, 186 of those through the air. Again, E. Michigan was able to put up 26 points in both teams' opener. While this may be an improvement statistically over last season, it is a far cry from impressive.

Long and Short: Clemson needs to be ready for Ball State and Pete Lembo. This is the biggest game they will play all season and expect to Lembo to take chances early and often to try and keep his guys in the game. A good example of this is the opening kickoff last season against OU where the Cardinals successfully converted an onsides kick. All that being said, make no mistake: this is the first of two "tune up games" for the Tigers prior to the trip down to Tallahassee. Clemson is much, much more talented than Ball State. This should not be much of a football game from a competitive standpoint because the Tigers are simply a much better football team. Clemson's offense is head and shoulders ahead of Ball State's defense. Like last season, I believe the defense Clemson will see tomorrow is complete crap and has little chance of slowing down the Clemson offense. The Ball State, conversely, will give Clemson's defense some unique looks and challenge them with a quicker pace than one week ago.

We will be watching many key points. Clemson's offensive line looked good last week run blocking. I expect more of the same this week. As most expect, we should see a revolving door door up front the next to weeks in an attempt to get some game experience for some young players. Along those same lines, I expect to see less of Ellington and more of Hot Rod and Howard. We have to get more than eight combined carries out of these two to take the load off Ellington. Andre looked great against Auburn and we'll look to keep him healthy headed into FSU and get the guys behind him more experience to assure there are quality snaps behind the starter. Along those same lines, Tajh looked good but it will be important to get Stoudt some quality snaps. You'll notice last week each time Boyd was forced to the sidelines due to losing his lid, Stoudt came in and the Tigers ran the football. We need to get him and the offense comfortable through the air because, as we saw last week, it is very likely Boyd will miss a significant number of snaps this season due to the helmet rule. We also want to ensure a prepared backup is ready should he be called upon down the road. In the passing game, I would like to see a receiver not named Nuk get more comfortable. We have a stable of good ones and will need the ability to spread the ball around. While Watson and Watkins will certainly be featured, it will take key grabs by guys like Peake, Humphries, Brown, and Bryant if this team is to make it back to the ACC Championship. Along those same lines, we need improvement catching the ball out of Brandon Ford. In order to fill Dwayne Allen's shoes, he has to be a reliable pass catcher.

Defensively, Clemson will get the no huddle look out of Ball State. The Cardinals have a very capable quarterback, receiver, and runningback. While Clemson is, again, far superior talent-wise, we all will be skeptical until we see more improvement--particularly out of the linebackers and in the secondary. Clemson was crap one week ago defending the pass. We saw various breakdowns downfield and absolutely have to correct these things. Most of them appear to be mental issues so you hope the coaches use the failures as learning experiences. I'll also be watching Travis Blanks' snap count. He had 24 last week and I suspect we'll see a lot of him, particularly with substitutions at a premium and Ball State showing more three receiver sets. Additionally, like the offensive line, we expect Clemson to rotate in numerous defensive linemen in and out of the game. We desperately need experience there and should substitute accordingly.

The outcome will be a win for our Tigers. I believe it will be a big win and a big day for the CU offense. The real items we are watching involve gaining real game experience up front, improving defensive communication, and simply getting more crisp as we move towards the showdown for the Atlantic in a couple weeks.