One of the items we belabored in the offseason and throughout camp was the relative inexperience of both the offensive and defensive lines. With a tough Seminole defense on the docket for this weekend, we'll examine the participation numbers of the Clemson offensive line to date and try to give you a feel for what we expect to see this Saturday. I'll point out that these numbers were attained directly from the CUAD (www.clemsontigers.com). "ST" below indicates the player only played on special teams. We are solely concerned about offensive plays and do not factor any ST snaps into the information below.

It is imperative Clemson hold its own up front against a very good Florida State defensive line. Many folks have pointed to this battle as the place in which the game is decided...As you will see below, Clemson lacks big game depth. Sure, our Tigers played on the national stage in the Georgia Dome, but only the starters got meaningful snaps there. The staff used the next two contests to try and build depth. We'll likely need that depth Saturday down in Tallahassee.

Here how the overall participation numbers for the each offensive lineman this season shake out (see these data in table form following the jump): 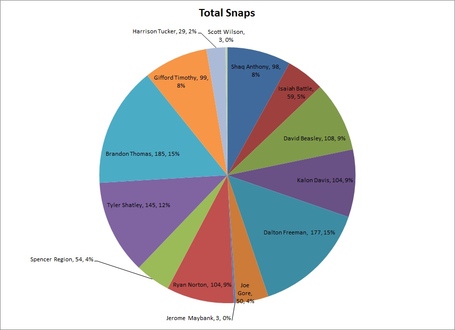 To date, I believe the Auburn game was the most telling game. Hopefully the participation numbers were largely impacted by it being the first game of the year, as four of the five starters went the entire game (89 offensive plays). Timothy was out for one play, replaced by Shaq Anthony. 89 plays is a heck of a lot of plays for an OL to play without substitution. This shows you either (A) how happy the staff was with our starting line or the obvious--we struggled to put together quality depth up front. I believe our play count this week will closely resemble the Auburn game assuming no injuries: 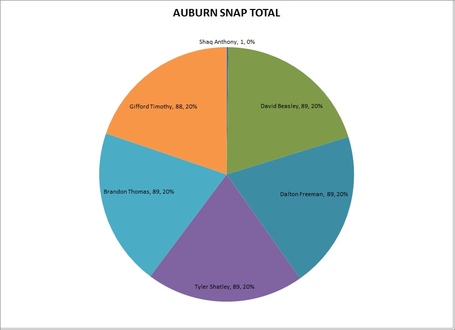 The coaching staff effectively used the younger guys in the Ball State and Furman games to gain much needed experience. This shows just how much emphasis this staff has on getting more players ready to play football and how young (read that as inexperienced) this group really is. The figure below shows snaps taken per class in each of the games this year.: 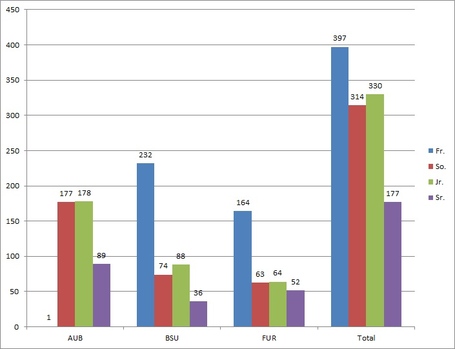 You'll notice that the freshman class had a mere one snap against AU. However, the totals show that the freshmen have taken more snaps total than any other class at this point in the year.