Below are more core game facts courtesy of the CUAD. 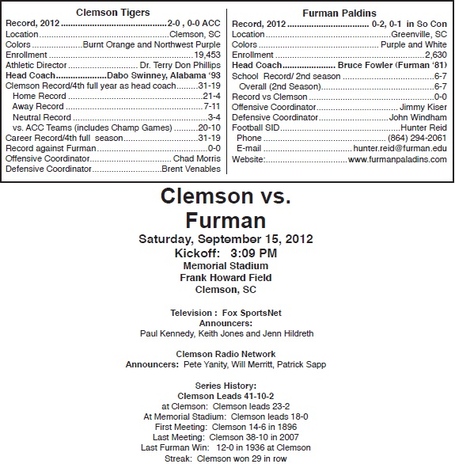 Bruce Fowler is the head man at Furman and has held this position since the departure of Bobby Lamb in late 2010. Fowler has an extensive history with Furman (assistant for the Paladins for 16 years under Sheridan Satterfield, and Johnson) and at Vanderbilt (seven years) under former Furman coach Bobby Johnson where he served as defensive coordinator/assistant head coach.

The defensive unit is led by John Windham. Windham (AKA, Squeezebox) has been around the game for some time and in the collegiate sport since his playing days at Vanderbilt. His stops as an assistant include a GA position at Miss. State, defensive coordinator at Colorado College, and DC at Gardner-Webb. He was the head coach at Sewanee, sporting a 45-61 overall record and 21-39 record in SCAC play.

Furman is a team that, like Ball State, has much more to gain than lose by traveling to Clemson this weekend. I shouldn't have to remind you that they gave Florida all they could handle last November down in the swamp. The Paladins abandoned their pro-style offense and gave Florida a look that was completely absent from any film review on Furman. The result was a 22-7 lead for the Greenville, SC University heading into the 2nd quarter. The point of this story...Furman is a capable team with nothing to lose. When you have nothing to lose, risks can be taken to offset some of the competitive disadvantages they have facing a defending major college conference champion.

One obstacle Clemson will not have to navigate around is quarterback Chris Forcier. The former UCLA Bruin (and brother of Jason and Tate-both former quarterbacks at major college football programs) graduated and his role filled by true freshman Reese Hannon, a Scout.com two-star recruit out of Greer. Hannon was forced into this role following an injury to fifth year senior Dakota Derrick in the Paladins' season opener. From the outside, there is an apparent talent dropoff from Forcier to Hannon. There is undeniably an experience dropoff replacing a fifth year senior (Forcier redshirted at UCLA and Dakota Derrick is in his fifth year of eligibility) with a true freshman. The growing pains Hannon likely is enduring should force the Furman offensive staff to keep things more basic and limit the number of surprises/deviations from their base offense.

Furman does have a bruising running back (Jerodis Williams) and a very capable tight end in Colin Anderson. I look for Furman to come out and attempt to neutralize Clemson's superior talent by making the Tigers play good fundamental football (i.e., they will likely run several option plays that require Clemson to play smart and strictly according to basic defensive rules). Over the previous two weeks our Tigers have repeatedly failed to stop the run. If we see more of the same tomorrow-especially if Furman just lines up and runs the ball at our guys-the panic flag should be raised to the top of the mast. As we've said before, many mistakes Clemson makes in the run game are correctable. The simplest is gap control and recognition. Our linebackers are repeatedly in the wrong gaps, out of position, and as a result get washed out of many running plays. Up front I believe that we can be good but are still longing for experience there. These guys have to grow up soon else we are in trouble next week in Tallahassee.

As mentioned earlier, Furman features a true freshman at quarterback. Accordingly, one would expect their staff to keep the reads and passes simple. I expect the same though if I were coaching against Clemson, I would probably just lob bombs down the field and expect the secondary to (A) blow a coverage or (B) commit an interference penalty. The secondary won't be challenged this week. Last week the highly thought of Ball State QB had issues gripping the football and was largely ineffective. This week inexperience will help the Tigers and hinder the opponent.

Defensively, Furman would like to show a 4-3 but, as we discuss each week, Clemson's spread looks will force them into nickel in most scenarios. Clemson's offense moved the ball well last week and I believe a similar result will be achieved again. Clemson's offense is simply too talented not to have a big day. Additionally, Furman has not seen an offense like this one and won't again this year. Clemson should wear these folks down with tempo, speed, and size. Clearly, there are high expectations and minimal worries with the CU offense at this point-especially with Sammy Watkins back in action.

Overall this is the latter of two tune up contests for Clemson in anticipation of the Tigers' trip down to Tallahassee. That is obviously a really big one against the odds-on favorites to win the division/conference. Clemson, like last week, will win this one and win big. The score is not the important thing but items present during game play.

We will be looking for many of the same items as last week plus a couple items that washed up during the Ball State contest. First and foremost, defensive football has to improve. Secondary play to date has been garbage with Xavier Brewer looking lost all year at FS. Either Hall is not getting it, or he's just as injured as we thought he was going into the offseason. Microfracture surgery is nothing to scoff at. We discussed the linebacker and line issues earlier but I will reiterate: get it together up front. Our linebackers are playing more downhill than they were last season but are just as equally confused about their gap assignment. DTs are getting eaten up inside. DEs get pinned backwards when they turn their hips. DBs are attacking from bad angles and not filling the backside gaps well. Defensive football is about team play - you have a gap, you hold your gap, and if 11 do this then you stifle the run. Otherwise the result is big plays on the ground, particularly with misdirection or a cutback. I will be examining the defensive line by qualitatively looking at what we have and making a comparison to the participation number.

Offensively, I would like to see Andre Ellington get his quarter and a half or so of work in similar to last week then assure we get Roderick McDowell and D.J. Howard their reps. In fact I would like to see both of Hot Rod and D.J. involved with the first team offense to assure they get reps with Tajh and crew and are involved with aspects of the passing game. I will be interested to watch Watkins in his first game back. I also want to see the impact of Sammy on DeAndre Hopkins. Nuk has proven he is the real deal. One would suspect that the combination of these two players brings a smile to Boyd/Morris' faces and concerns defensive coordinators. I have repeatedly stated that Peake will be needed during the season and have been pleased with what I've seen from him overall. He's dropped a couple passes but clearly is evolving. The WR that I will be most focused on tomorrow is Martavis Bryant. He has so much natural talent and size and Clemson needs him to evolve. However, his half-assed efforts last week with perimeter blocking were completely unacceptable. I don't want to see another of our receivers get drilled on a screen because Bryant can't make a freaking block. The offensive line observations are consistent with what we've repeatedly discussed here. One item of interest is the health of David Beasley. He suffered a sprained MCL last week and has been questionable for the first half of this week. We need Beasley to be healthy because he brings a level of intensity to this offensive line that I haven't seen out of the others. Obviously, if there is any question I'd hold him out. At the very most his play should be limited because we really need him in next week's showdown. He is currently a game-time decision, but should be just fine for FSU.