Share All sharing options for: Clemson vs. Auburn--Game Preview

Above is a general overview of the two squads followed by a clip from the CUAD website below (link). 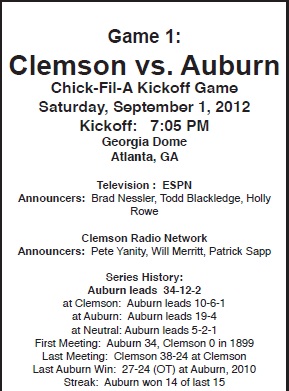 Clemson and Auburn share a history that dates back to 1899. Overall, Auburn has been largely dominant, holding a 34-12-2 series record. This includes a 14 game winning streak against our Tigers between 1951 and 2010. We will note that many of the series wins occurred after Clemson joined the ACC. As most know, ACC academic requirements were much more stringent back in the day compared to other conferences, particularly the SEC. I'll also note that these two teams have played one another four times since 1998. These games include two Auburn Peach Bowl victories, an Auburn win on the Plains, and a Clemson win last season in Death Valley.
Things have shaken up for both squads since last year's game. The two teams have turned over a combined three coordinators since the 2011 season. We've discussed Clemson's new defensive coordinator Brent Venables excessively over the offseason. Here is how the base stats matched up from '11 (thanks www.espn.com). 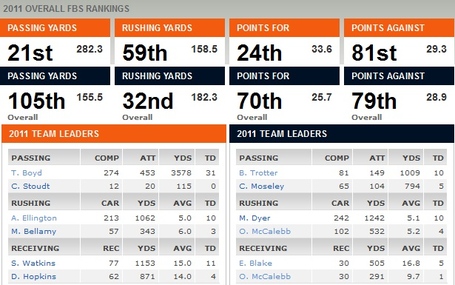 Auburn canned Ted Roof following a terrible 2011 campaign. Roof simply was not prepared to coach on the other side of the ball from Gus Malzahn, amongst other issues, and there was always a dichotomy between his preferred style of defense and the one that Chizik likes to run. Teddy is gone and former UGa and Atlanta Falcons defensive coordinator Brian VanGorder is running the War Eagle defense. VanGorder, as you probably know, was the architect of the early '00's Bulldog defenses that put Georgia in national championship contention. Georgia struggled following his departure and have not returned to such dominance since.
VanGorder has repeatedly stated he is a 4-3 guy, so we won't argue there. However, there is no way Auburn doesn't bring in the extra defensive back to try and mitigate the Clemson attack. Go ahead and expect this all year--teams will play nickel against Clemson's spread looks. BV is known as an aggressive defensive coach who likes to create havoc up front with more athletic linemen. What Auburn also has there is quality depth through the 2's there (STS talent assessment). The secondary for Auburn is deep and will feature a multitude of looks for the first year coordinator. What you will probably notice is former UGa defensive coordinator Willie Martinez. Martinez followed VanGorder as DC at UGa and effectively ran the unit in the ground. He then was pushed out as DB coach at Oklahoma following Mike Stoops' return to Norman.
Look for Clemson to try and mitigate the active Auburn defensive line through a variety of screens and delays. Auburn's defensive line is too athletic/deep and Clemson's o-line too young for our Tigers to try and to block with just 5 and M2M-block everything. Again, Clemson will feature A-gap to A-gap rushes and the quick passes. The Tigers will try to attack the AU linebackers, as this is the weakest part of the War Eagle defense. Success in the running game and the ability to slow the defense down via screens and, potentially, some misdirection could open up play action options to take shots deep. As we've discussed here many times, Chad Morris is committed to stretching defenses so he'll be keen on slowing down an aggressive AU defensive line to give Boyd time to take shots down the field throughout the football game.
Gus Malzahn left Auburn to become the head man at Arkansas State. We have heard a few rumors about his freedom being stifled in regards to playcalling after the Clemson loss last year, and his relationship with Chizik became more and more strained. Then there is the issue of Malzahn's wife's comments, which seemed to be a sticking point in some other jobs that were open for Gus. I'm not sure this was a smart move for Chizik. What I am sure of is his replacement, Scott Loeffler, has displayed a completely different attack than the Hurry Up No Huddle approach we've seen at Auburn recently.
SL is a former Michigan QB who grew up around Bo and Lloyd Carr. Thus, Loeffler is a pro-style coordinator who spent last season leading the run-oriented Temple offense in '11. What will be interesting, though, is to see how he attempts to get from wide open spread option attack to a slower, more traditional attack. Looking at the roster and the recruiting strategy implemented over the past couple years, this will be an evolution and the War Eagles will utilize spread looks throughout the 2012 season.
While Loeffler would like to line up and run the football, he is no novice to spread option football. This man coached at Florida from '09 to '10 and was a part of the Gators' attack as the QB coach. This makes Auburn dangerous for Venables and the Clemson defense. The coaches, admittedly, have been watching film that varies from Temple last season to Auburn to Florida last decade. The identity of this Auburn offense is confusing to say the least. How Venables and the Clemson defense adjust to whatever Auburn throws at them early will be interesting to watch.
One thing is certain...Auburn will be committed to to pounding the football. They will stray away from much of the smoke and mirror plays Malzahn used and will line up looking to punch someone in the face. Additionally, the new offense instills more complexity. Recall from our study of Clemson's offense under Chad Morris, this offense is relatively simple. The HUNH offense uses relatively few formations and is essentially the "Wing-T on crack." The pro attack Loeffler brings adds many more formations and strength on strength attributes than the previous offense.

Now that we've discussed the coaches, we need to chat about the players. Auburn waited until very late in the preseason to name Kiehl Frazier as their starter. He beat out a very unimpressive and injured Clint Moseley for the job. Why the staff waited so long to name Frazier the #1 is confusing to most Auburn people in the know. They all say he was the clear leader from the Spring game through fall practice. For those unaware of Frazier's credentials, he was the 2010 USA Today Offensive POY who played in 10 football games last season. He is a dual threat in the backfield--a dangerous runner with a capable arm. If Clemson cannot figure out how to contain a mobile QB, the Tigers could be in for a long night.

Running back for Auburn is somewhat of a question mark. After a tumultuous offseason, Michael Dyer left Auburn. This takes a tremendous amount of quality snaps away from the Tigers. You'll recall, Dyer was instrumental in AU's 2010 run to a title. You'll also recall that he torched the Clemson defense to the tune of 151 yards last year. Inexplicably, Auburn quit running him or else he would have had a boatload more. Why they chose to do that defies all reason. Onterio McCalebb takes over as the starter. McCalebb is a hit or miss runner who definitely has talent. Behind him are Tre Mason and Mike Blakely. Blakely is the name that grabs my attention. The Florida transfer was a big time recruit several years ago and will get his share of carries in the three man rotation. It would be nice if Dabo had even tried to get him to transfer here, as he was very interested in Clemson during the previous recruiting process.

Like Clemson, Auburn's offensive line looks dicey on paper. The questions further arise with the loss of Reese Dismukes at the center position. There is some experience at the guard position but Auburn's two-deep features nothing but freshmen at tackle (both of them). While these guys are extremely talented, experience is critical up front--especially when everyone is trying to put together a new scheme. Auburn fans point to the overall talent and the experience inside. Everyone will be watching this group, particularly the tackles.

An interesting, and often overlooked, member of the Auburn offense is Jay Prosch. Prosch transferred to Auburn from Illinois due to a family illness. He is thought of as one of the best blocking backs in America and gives Loeffler more options. This also frees up Auburn's excellent TE, Phillip Lutzenkirchen, to be more flexible. PL likely would have been used as a primary blocker in this offense without Prosch which, as most of you know, would have significantly limited a really good tight end who is a viable threat catching the football.

Travon Reed, Emory Blake, and Quan Bray will lead the Auburn receiving corps. Reed is the man everyone is watching. Last season he was predominantly used in gimmick situations. Since, the sophomore has bulked up and taken on a much bigger role in this offense. Bray is someone we heavily recruited. These guys will take on a much more traditional role; as Reed put it they will be real receivers running real routes.

Corey Lemonier is a beast at the defensive end spot. He will definitely test Clemson's offensive tackles during the course of this game. Lemonier dominated many SEC schools last season and is poised to carry that momentum into his junior season and parley that into a first round draft pick next spring. As I said earlier, this unit is deep. Dee Ford will start at the other end. Angelo Blackson and Jeffery Whitaker--two 300+ lb men--are the 1's inside. A nod to their depth up front is Junior Nosa Eguae, former 23 game starter, falling way down the depth chart going into the season.

Auburn's defensive backfield is a place the Clemson Tigers want to exploit what appears to be a talent advantage. Last season's starter, T'Sharvan Bell, lost his corner spot and will be used in nickel formations. Ryan Smith, Ryan White, and Jermaine Whitehead bring relatively little starting experience to the secondary. If Clemson can give Tajh time, it could be trouble for the Auburn secondary.

There are a tremendous amount of questions going into this football games on both sides of the football. I will not lie to you, I am not sure what to expect...out of either team. Clemson features inexperience on both sides of the line of scrimmage. Clemson seeks vast improvement out of the backers and in the secondary. Auburn has a ton of questions on the offensive line and both in the secondary and at linebacker. How each of the new coaches instill their respective systems and their players respond will be interesting. Clemson's performance protecting Tajh Boyd and getting Andre Ellington yards should give the fans a better idea of where this team is going in '12.