Clemson opens up the season Saturday against the Auburn Tigers in the the Georgia Dome. We'll see how this squad's recruited talent compares to our Clemson Tigers. Before we get into the analysis, I'll begin with the standard housekeeping items. The depth charts for both teams were attained DIRECTLY from the Clemson website (www.clemsontigers.com). A pdf version of this can be found here. I will go ahead and tell you that because of injuries and Monday depth chart adjustments, some items here may be a little out of place but in an effort to maintain consistency, I'll use both teams' depth charts as presented on the official website.

Figure 1 and Table I both show an average of offensive players, defensive players, and specialist listed on the two-deep roster. Tables II through IV show the two-deep roster used for analysis along with the recruiting ratings for each player on the roster. A quick glance shows you Clemson looks to be slightly behind Auburn in recruited talent, particularly if you discount special teams recruiting as you likely should--particularly when you view how most teams present special teams depth.

On average, Clemson trails Auburn both in terms of average offensive talent ratings, with the specialists, and overall. Clemson was ranked higher in terms of defensive talent based on Rivals data yet trailed Auburn by 0.03 stars in the defensive Scout rankings. Overall, the quarter point advantage Auburn has on offense is the biggest item that stands out. I don't pay too much attention to the special teams rankings for many reasons and defensively Clemson appears to have an advantage or, at the very worst, is a talent wash with Auburn based solely on the items shown below. 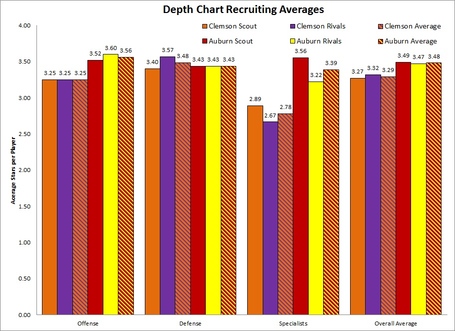