We will round out our Spring/early Summer look at financial data released for public colleges and universities. This information was released in mid-May by the USA Today. All data shown in this article was attained through the USA Today website and pertains only to public universities who disclose this information. This article compares our Tigers to other schools around the country. Data is presented in a similar fashion to previous articles.

Clemson ranked 39th overall in revenue generated in FY '11. As you see, Clemson's $61 million in revenue is $17 million below the #25 spot on this list. Average revenue for the top 25 teams was nearly $100 million and the median for this group over $92 million. 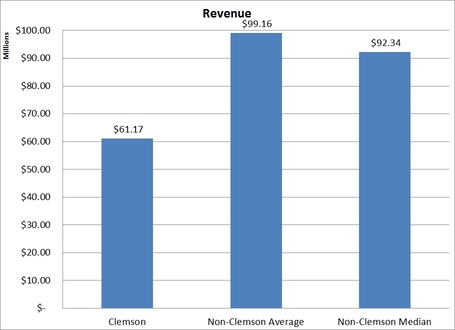 While Clemson spent the 43rd most out of the reporting schools with expenses of over $58 million. The average top 25 school spent $91.5 million. The median school spent nearly $87 million. While Clemson's shortfalls in this area are still large, the delta between our Tigers and the others shrank when compared to the revenue statistics shown earlier. Clemson was $15 million below the 25th highest expense team in FY '11. 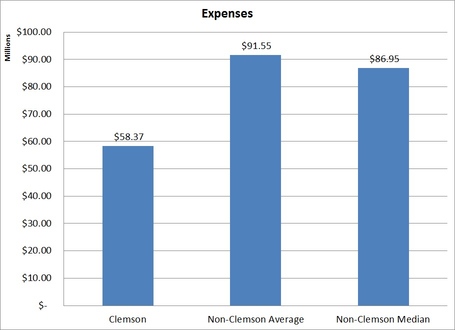 In terms of profit, Clemson ($2.8 million in profit) was a respectable 31st overall. Clemson was $680,000 behind 25th place Auburn. Average profit for a top 25 profit generating school was well over $10.4 million and the median was right at nine and a half million dollars in profits. 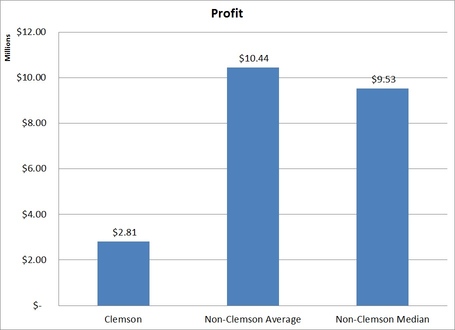 You don't have to be a mathematician to realize that Clemson trails quite a few schools in revenue generation. This severely limits how much Clemson can, in turn, spend on their athletic programs. What you also noticed was the lack of ACC representation in the above statistics, particularly inside the top 20. You see many SEC, Big Ten, and Big XII. Those are the leagues committed to football and their commissioner goes out and fights for things like better television deals and in-house networks. There is no way one can argue that the ACC is a big reason Clemson ranks so low in many of these financial categories.