Share All sharing options for: Basic Moves of Pass Blocking

Pass blocking schemes have been pretty well covered by some other writers who spend their time analyzing the passing game -- either specific plays or philosophies. In this article, we want to hit the highlights of what the linemen are doing specifically, and not so much the protection calls themselves.

Our linemen have been generally good at pass blocking over the years and the sack totals have shown as much, but the sack total went way up last season. The primary reason was not the OL blocking (well except for one particular RG, or the NCSU game), it was the protection calls and the QB's fault. I think most fans fail to accept that the linemen are not at fault when the RB doesn't pick up the right man, or if the QB failed to change the protection call when he saw a blitz coming. The Chad stated that 10 of the 33 sacks Clemson gave up last year (nearly twice that from 2010) were on Tajh Boyd, while 7 were on WRs who ran the wrong route and messed up the whole timing of the play. The QB has the responsibility of the outermost blitzer, not the Tackle already matched on the DE. The WR has to run his check down when the blitzer is coming from his side. Its not always the line's fault, and spread teams often only block with 5. You can't block 6 or 7 with 5. Picking them up involves the overall scheme of the front, while we want to go into the techniques of the lineman.

The stance is the first phase of any block. We've covered the basics of stances and the 2 point stance for pass-definite situations is not fundamentally that different. The main purpose of a good set-up is to establish a cushion between himself and the defender. The depth of that cushion depends on several factors, but primarily the alignment technique of the defenders. An OT may kick out 3 or 4 feet to properly square himself against a DE angled wider, like a 9 technique, while a Center wouldn't get more than a foot of separation with a NG.

On the snap, the elbows need to be tucked with the chin back and head up in particular for the pass. The weight needs to be predominantly on the inside foot and he maintains the inside-out relationship to the pass protector. His initial punch from his stance needs to be able to pull the pad level of the defender up, and cause him to lose momentum and redirect his charge. If he can do that and the QB has a quick release, theres a minimal chance of a sack.

The basic techniques that a lineman uses are the hard post, soft post, kick-slide, soft kick, and a tweak to the soft kick called a jump set. Neutralizing pass rush moves like the swim or push-pull is another post entirely.


A hard post is used against a NG, Shade, or 2i technique DT by a Guard. It is a hard jab step laterally to the inside, with a pushoff from the outside foot. Its meant to seal off the A gap from all penetration.

Recall above we said that the OL wants to maintain the inside-out relationship. His job is to protect to his inside (gap) first, and let the backs and QB handle the outermost rushers. A hard post is meant to get that inside leverage or head-up position on the defender and protect the inside. As the G laterally steps inside, he puts his inside hand into the defender's chest. Its extremely important that the feet are always moving, and they should be quick hard plants.

If the Guard is uncovered and is helping the Center with an area-protection scheme, the Guard needs to keep his outside hand free. The inside hand drives upwards into the numbers of the 1-technique and raise his pads so the Center can have a better surface to punch. He is supposed to stop the defender's charge into the A gap until the Center can rise up and punch or slide into position. In the area scheme, the Guards should keep their shoulders square to the LOS so that they can adjust to any inside twists or stunts by the defense.

Tackles and TEs can use hard posts when matched up on an inside aligned defender. A 4i would get such a block by the OT, while a 6-7 technique DE would get one from the TE.

The situation posed by the 4-3 Under on the weakside can result in both the G and T taking hard posts. In the Under, the weakside is presenting an "Eagle" front - a 3-technique and 5/6-technique with a 30 (WILL) Linebacker aligned behind them. Normally the Guard and Tackle will take them straight up, but if the defense runs an inside twist, with the 30 blitzing into the A gap, and the 3-tech jumping into the B, theres an adjustment to make. The Guard must make a call to let the Tackle know that a LB is blitzing inside, and then he'll take a hard post to neutralize the LB. The Tackle then picks up the 3-tech with a hard post inside. However, the OT should always keep his head up and back so that he can see it if the Guard has no time to make the call. If this situation occurs, the RB must handle the DE. 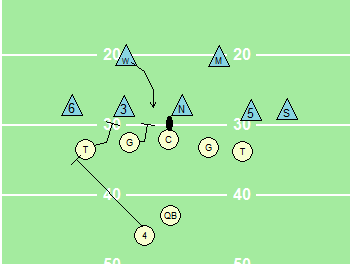 Centers only really take a hard jab step when they are assisting Guards in an Even front or against the backside 1-technique NG, and has to keep one eye on the MLB in either case. If the MLB pulls a late twist, the C and G can switch off assignments or remain in their assignment as its drawn up, with the Center peeling off the DT to handle the MIKE. However, if the Center is expected to pull around behind the Guard to pick one of these up, he needs to step back further as he drops off the snap. In an area-scheme, they should switch off defenders.

Soft posts are the primary pass blocking move used by the Center on the NG, or any lineman with a defender lined up directly nose-on. It is a quick jab step of the inside foot and replant without moving hard to that side. The soft post is meant to rein in the natural tendency of the Guard or Center in how he would attack the 0/1 or 2i-technique DT because he can actually move to either side of the blocker in that alignment. The protector is not supposed to move forward into the defender, only side to side or backwards.

When using the soft post, his inside foot should be slightly inside of where the defender's inside foot goes. He should use a 1-2 punch into the numbers while setting his feet in a soft post, its not so important to keep one hand free in a soft post compared to the hard post, because it is assumed that the technique is used when the defender lines up nose-on.

Soft kicks are used against tighter outside-shaded defenders, such as the 3-tech DT, 5 tech DE, or a 9-technique (on a TE). To perform the soft kick, the lineman pushes off his inside foot and takes a short jab step with the outside foot to the side of the shaded defender. It is not a big step out, so its not going to be used by an OT against a 6 or wider aligned DE (if there is no TE). This is meant to take care of the defenders aligned much tighter to the blocker's head, so his outside foot should be put back down in almost the same place - roughly 4-5 inches away.

Soft kicks for a Guard are the opposite of a soft post, except that theres a little more lateral outside movement against a 3-technique. His inside foot will follow the outside foot laterally as he reaffirms his base, but only enough to do so. For a Tackle, he may widen up further. He'll take one step off the ball and may widen up to 2 feet, with the feet staggered.

He then has to follow the outside punch by moving his inside foot over to square up, and follow it with a 2nd punch to the chest by the inside hand. This is usually the problem with bad pass blocking. You always have to move your feet to pass block, and your punches must have effect.

A Jump set is just that, the blocker basically hops into position on a quick pass play to his outside while simultaneously punching with both hands. It is also something to use when a LB shows blitz, causing a Guard to make a call to the OT to block inside, and the LB pulls back. If the LB pulls back the Guard has to jump back out to handle the 3-technique.

Kick slides are used by the Tackles against wider-aligned or very speedy Ends. Since his weight is primarily on the inside foot in a proper stance, he'll have little difficulty pushing hard off that foot backwards and outside. He just cannot turn his shoulders, which presents an opportunity to the pass rusher to get even better leverage on him. You want to make the DE get around the long corner, which makes him go deeper upfield before he can really make a move on the Tackle. The OT wants to step laterally and slightly backwards, along a diagonal path, while keeping his shoulders as square as possible to the LOS. His outside hand should come into the outside number of the DE -- otherwise he'll end up turning his shoulders because the DE will get the jump on him with the added outside leverage.

Guards use kick slides in fan-protection schemes where he may have to commonly face a 4i or 5 technique DE because of an outside pass rusher to draw attention from the Tackle. This is what you'll see much more against 3-4 Okie fronts.

You might worry that kick sliding allows the OT to get beat by an underneath move. Its not as bad as you would think, and only the quickest DEs, or those who have really refined their hand usage, can accomplish it unless the OT really steps 2 or 3 times to the outside before the DE commits. If the DE tries to cross the face of an OT from a 6-technique, he'll almost always get grabbed and knocked completely off balance by a Tackle who was well-coached to keep his shoulders square.

In this video, he's using the opposite hand to force the defender outside.