We continue looking at financial information, comparing Clemson with South Carolina. Earlier we looked at individual financial items provided by the Department of Education. We'll begin with data from Fiscal Year (FY) '11 then track key figures from FY ‘06 to FY ‘11. Again, the fiscal year for each year described in this article began on July 1 2010 and ended on June 30 the following year. Hence, information for FY '12 is not yet available as the fiscal year just ended several weeks ago. Data was acquired from USA Today. They provide in-depth definition of the revenue/expense categories at their site.

We'll look line by line at these items and try to understand the monetary differences between each and why those differences occurred. Clemson outgained South Carolina in ticket sales in '11. This line shows me a couple things. First and foremost, the school was able to generate more revenue than its in-state SEC foe selling duckets. This infers that Clemson's fanbase is as (or, monetarily, more) committed as the fans of the Gamecocks-particularly when it comes to buying athletic tickets.

Student Fees are the costs passed on to the students to support the AD. This is the Athletic fee paid by the students, which lets Clemson students go to games free, along with other charges that might come up. USC's student body as a whole contributes over $650K more than Clemson's. Clemson's undergraduate enrollment (14,477), however, is significantly smaller than South Carolina's (19,725). Assuming all of these fees are paid by undergraduates, this comes out to $110.13 per Clemson student and $113.98 per Carolina undergrad. Overall, the South Carolina undergraduate student base is 36% larger and generates 41% more cash in student fees.

School funds are both direct and indirect contributions from the university. Clemson claims $3.5 million while South Carolina $0. I am not sure how Carolina claims zero as tuition waivers, security, maintenance, various admin costs, and state funds amongst other things are typically encompassed in this category. For example, the out-of-state athletes get their out-of-state tuition waived by CU, and this shows up as a "revenue" to the AD and IPTAY doesnt have to pay the out-of-state cost. In fact its a bit of a phantom number if you think about it, they are waiving a cost and counting it as revenue for the AD. Sikes is still getting it back however, because they tax the AD to the tune of about $3 million per year for overhead.

Contributions show Clemson at a $10.2 million dollar disadvantage. However, we want you to pay special attention to this line. At first glance you would say "Wow, Gamecock Club is killing IPTAY". This is not what the line refers to. The contributions line is the amount of intake that is transferred into the AD; it is NOT the amount that each booster arm brings in each year. The booster arms at each school have different by-laws, but at Clemson the Athletic Director has no discretion over the IPTAY money. He cannot delegate anything beyond the cost of scholarships or Vickery costs. It is up to the IPTAY Board of Directors' discretion under Priority Four. Therefore, our investigations show some of this deficit, since we're behind here to many schools, lies in how the schools report their booster club contributions. We suspect that Carolina uses a different asset allocation and accounting strategy with its Gamecock Club than Clemson does with IPTAY. This suspicion would explain some of this large Clemson deficit. Also, remember that Clemson-at the end of FY '11-had over $41 million in the IPTAY bank account, and generated an average profit of $6 Million per year, which is not being spent on anything in our figures. This represents over a 37% increase in saved funds since the end of FY '09.

How much of this $41M that is currently allocated to our facilities projects (Video Board changes, Riggs Scoreboard/Video, Littlejohn additions, etc.) is unknown, and should show in the FY12 budget. The case of the contributions financial difference is left as an open question, but we don't think it is as big an issue as the others.

Clemson got snowed in licensing and rights over the Gamecocks. We've all been educated on the monetary dominance of the SEC over the ACC and those figures stick out here. "Other" revenue is the catch all for camps, third party media deals, endowments, and investments. Clemson saw a $6+million deficit here. This is where Clemson is getting hurt by the ACC membership and bowl money distribution.

We think it also bears mention that the bonds SC uses to finance their facilities upgrades can be counted as revenue when they are cashed in, but again it goes right back out in expenses. As long as the SEC TV money rolls in, as you'll see below, there's not much to worry about for them on this point. You can take out big loans if you're getting big paychecks every year.

All these add up to Carolina bringing in over $22 million more than Clemson, some via these accounting practices.

Expenses follow revenues (the more cash you bring in, the more you can spend), so it is no surprise that Carolina spent $22 million more than Clemson. Carolina spent $6 million more than CU on coaching staffs and almost $9 million more on facilities and upgrades thereof. Again, more revenues allow for this. I will point out that the coaching numbers are much higher than those discussed in our earlier article featuring ope.ed.edu data. The scholarships are pretty self-explanatory, and this doesn't count things like Vickery/Academic centers or any other perks the athletes everywhere get (like athletic clothing).

The big question now is where are we going? Below is a revenue comparison between the two schools from FY '06 through FY '11.

As you can see, the spread between the two schools grew dramatically over this five year period. 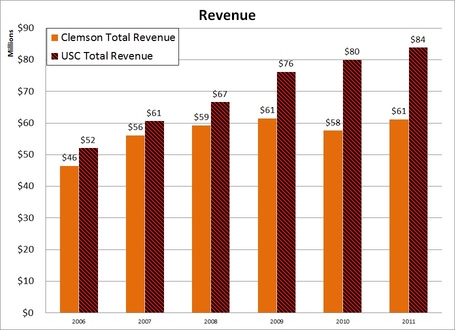 It is pretty apparent that South Carolina steadily increased revenue over the entire course of this time period. Clemson, however, was relatively flat in terms of revenue growth from 2008 to 2011.

Here is how the year over year revenue growth looked throughout the course of this portion: 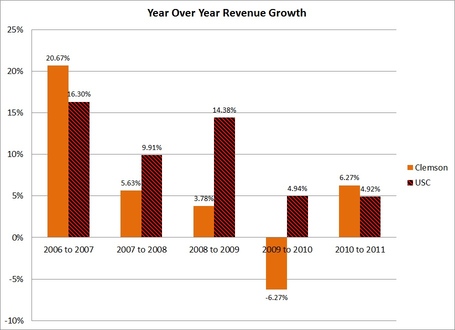 What we saw in the first year was impressive growth by both schools. Clemson had two comparatively underperfoming growth years while Carolina increased revenue by 9.9% in 2008 and 14.4% in 2009. The Gamecocks then maintained 4.9% growth rates. Clemson, had substantial negative growth (-6.27%) in '10 and rebounded with 6.27% growth to end '11 with essentially the same revenue numbers as 2009.

Then, you must ask, where were the greatest increases over this time period for South Carolina, particularly compared to our Tigers? The category that sticks out is "Licensing/Rights." The picture below (hit the jump) speaks 1000 words. 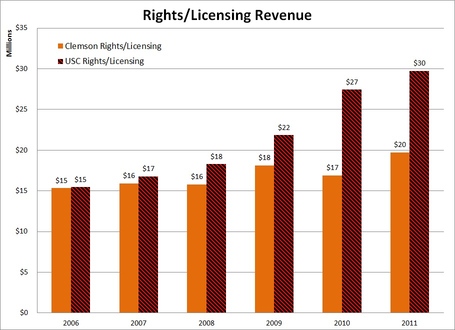 This line of the USA Today budget encompasses several lines in the NCAA AUP format that we detailed back in spring. It is NCAA distributions, bowl money, conference TV money, championship game money, and rights to radio and internet. Note this is NOT just the conference TV money. The two teams began this time period in virtually a dead heat at $15 mil per team per year. Clemson increased their take by $5 million over the next five years to approx. $20 million. Carolina killed it here, doubling the initial licensing/rights numbers over the course of this progression to $30 million. There, folks, is nearly half of the overall FY '11 revenue deficit we talked about earlier. No doubt SEC television money greatly boosted the Gamecocks' numbers here while our ACC deal was not as fruitful.

As we said earlier, the expense data follows the revenue--the more money you bring in, the more you can spend. Expense data below should be no surprise. 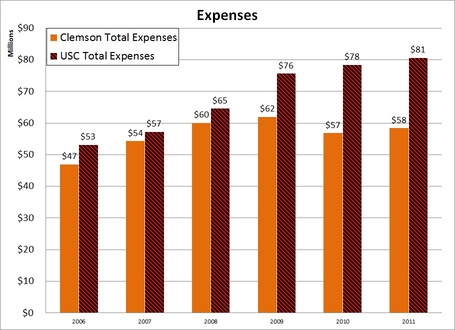 When you put all of this together, you see that Clemson and South Carolina are on diverging financial paths. Year after year the monetary gap between the two increases. This is illustrated below through a comparison of the deficit between Clemson and SCar in both revenue and expenses. 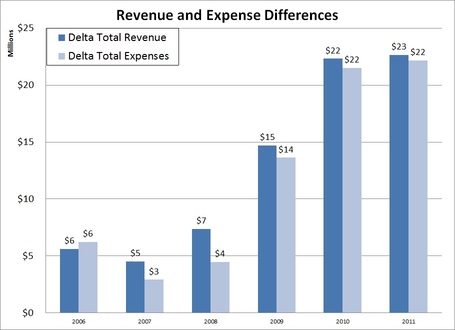 The difference in monetary influx and outlays is dramatic. As recently as FY '08, Clemson and South Carolina were separated by approximately $7 million. Two years later that differential ballooned to three times the '08 differential. You cannot deny the fact that Carolina is bringing in cash by the truckload and Clemson appears to be running in quicksand. While the new ACC television deal should increase revenues, it appears Carolina is far ahead of the boys in Pickens County and there is little hope to close the large gap that keeps expanding between the two schools' bank accounts with Swofford in charge.

Will he get a better deal for the Orange than the Pac-12 and B1G got for the Rose? The Champions Bowl might get $80M or more as well, so then what?

Its quite clear, based on the numbers above, that the ACC needs to get to work when it comes to our broadcast and licensing rights.