We took the time to refresh everyone's memory of Clemson and the ACC's financial information via USA Today data. Now we move forward looking at other teams and conferences. Again, all data shown below was attained from the USA Today's annual discussion of athletics finances for public institutions. We'll begin looking at data from fiscal year 2011 for public institutions within the Big XII and Clemson. Colorado and Texas A&M were included in the Big 12 data set so we'll include them here.

Revenue data for Clemson and Big XII public universities are shown below. 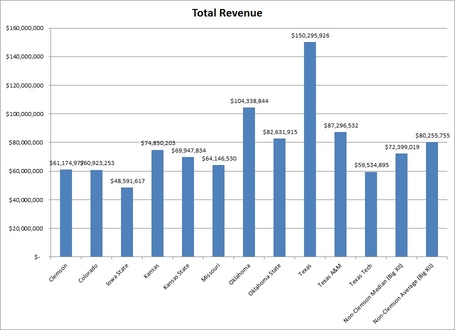 Clemson was well below both the average and median revenue numbers for the Big 12. Clearly the average was skewed by Texas' ridiculous monetary intake and helped by Oklahoma's king sized haul. Clemson's revenue was higher than that of Colorado, Iowa State, and Texas Tech. Our school was completely covered by OU ($104 mil) and Texas ($150 million). Oklahoma State ($82.6 million) and Kansas ($74.8 million) were also well ahead of Clemson's nearly $61 million in FY '11 receipts.

Expenses followed revenues and can be seen below. 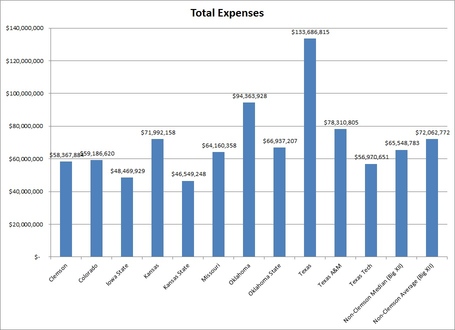 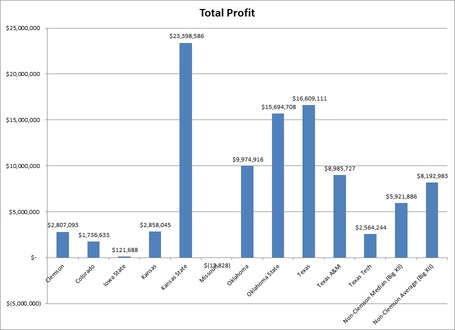 Profitability out of this group is impressive. Kansas State hoarded $23.4 million in FY '11. Ok State and UT each netted over $15.6 million. OU and TAM profitted $10 and $9 million respecitvely. Clemson's $2.8 million profit is nice but pales when compared to the Big 12 average and median numbers. I will note that only Missouri ran a deficit and their $13K shortfall was probably not breaking the bank.

The big question now is "How do these numbers compare with the ACC data we previously discussed?" In order to try and look at the "typical" team from each conference, we'll again use the median and mean. We also pulled the Clemson data out and put it side by side with the rest of the ACC and the Big XII. 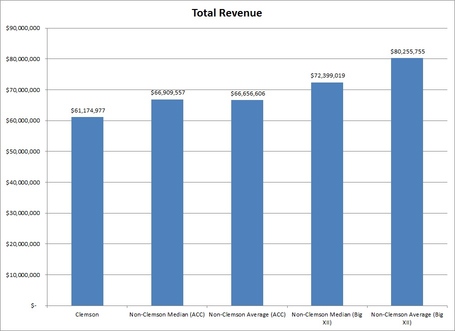 Clemson trails both conferences in terms of mean and median revenue figures. The Big XII absolutely killed the ACC and Clemson in revenue average--largely due to Oklahoma's and Texas' ability to bring in much more cash than any ACC school in this sample. When one looks at the median, he/she also sees the ACC lagging behind to the tune of $5+ million.

Note that the Big XII's previous TV deal netted them about $15M per school per year on average, compared to the $12M figure the ACC teams got from the first year of the ESPN deal after Greensboro takes one team share. 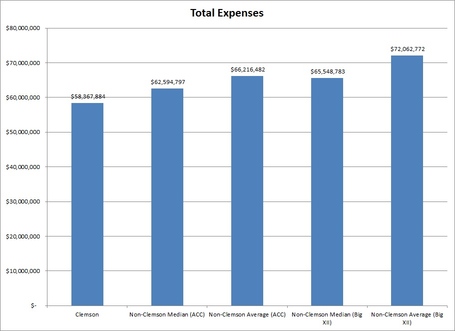 The expenses amongst those surveyed showed a closing gap between Clemson/ACC (I guess those guys out West couldn't find enough items on which to spend all that loot). The ACC trailed the Big XII median team by $3 million and the average was $5.8 million behind the Big 12 (again, Texas' high spending helped move their numbers upwards.

With such a wide disparity in revenue and the closed difference in expenses, it should be obvious that Big XII teams are banking much more cash at the end of the day than the ACC crew. The info is shown below. 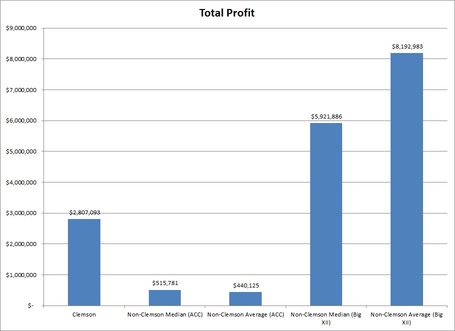