Pull blocks are in a category of blocks all by themselves and there are several types and techniques within a particular category of pulls. A bootleg puller is not necessarily doing the same thing as a puller on a Power O/G play or a bucksweep, for example. I wanted to spend some time focusing directly on the sweep pulls before going to the trap, which we have covered a little before. The biggest difference between a sweep pull and a trap pull is in the angle of attack on the defender. The sweep puller gets depth behind the line when he pulls, but the trapper takes a quicker, flatter path to the defender. Also, the initial movement of the shoulders is different for a trap vs. a sweep: a sweep pull can start out with the shoulders turned 90-110 degrees (basically perpendicular to the LOS) whereas the trap is a little more of a pivot turn. We'll cover the trap more in the next article.

The sweep pull can either be a long sweep or short sweep. A play like the bucksweep is perfect for illustration because it actually has both in it. The onside/playside guard is executing a short sweep while the offside/backside guard executes a long sweep pull. Even then, the pulls are broken down into different types, which are only evident after a few steps. 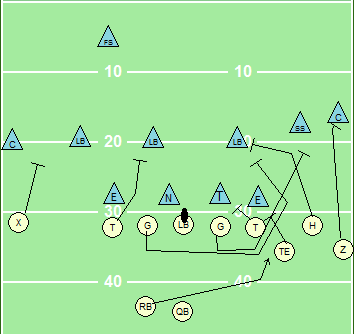 Spread Bucksweep vs a 4-2 front 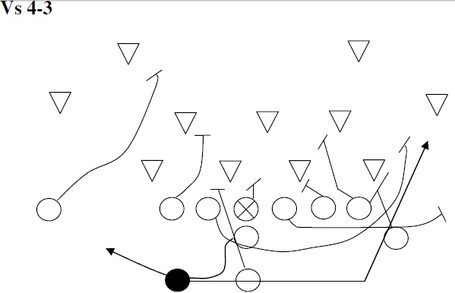 The first kind is what I call a Log block, but is also called a Wall or wall-off block. This is when the blocker uses his inside shoulder to seal a defensive end to the inside. It is called a Log in some cases because the blocker is trying to turn the defensive lineman's shoulders around (like rolling over a log) from the inside to the outside. For example, the DE may start with his shoulders parallel or turned slightly facing the RB/QB, and you want to roll him over so his shoulders are facing the sideline. At the same time you're walling off the inside so the play can go outside behind you.

The second is a kick-out or Hammer block. I think the Hammer is a little more specific and a bit different than a normal kick-out at the end, but it depends on what the coach likes to call it I suppose. Essentially these are blocks where the blocker attacks from the inside-out, and the ballcarrier is meant to go behind him into a crease.

In the Auburn video you can clearly see the lead puller execute a kickout block on a force player, described below.

The first steps for either kind are the same. For our example we'll use the RG pulling out and going to his right. His first step will be hard off his inside foot while rotating it slightly. His right foot is pulled straight back in a bucket step, and this causes him to open his hips 90 degrees. An easy way to learn it is to make the RG try to slap his left buttcheek with his right hand. It will force him to open his hips and turn his shoulders almost perpendicular to the line.

His second step will be to put the left foot he pushed off with directly in front of his right, which may cause the left shoulder to dip a little. At this time he locks his eyes on the spot he needs to go and he squares his feet up again to get a good base. He'll turn again, getting himself parallel to the LOS, and about 2-2.5 yards deep behind the line. This depth gives him enough time to properly square himself to the line if he isn't.

Now if there is a penetrating defender off the edge, or in a gap, he has to negate the threat to the play. This can change his assigned task, but its better than allowing a TFL. This is another reason why he has to get the depth.

By the 5th step, he'll start setting himself up for his assigned block. If he's executing a log block on a DE (or OLB), he has to tighten up his path to the outside blocker on the line, who will not be blocking that DE (or OLB). The DE is unblocked by both the TE (if there is one) and OT intentionally. He basically has to come right off their ass, when they Veer block inside, and hit the DE before he gets into the backfield. He hits him with his inside shoulder and tries to turn him as described above. Ideally he would keep his outside shoulder as free as possible. 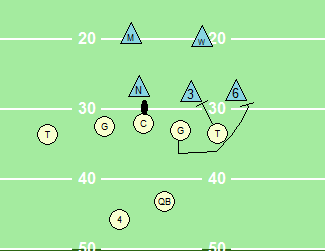 If his job is to hit a stacked OLB, he does the same things. He squares himself to the LOS and comes off the outermost blocker's butt and hits the OLB with his inside shoulder to wall-off the pursuit.

The Hammer is a little different after the 5th step. A hammer is more common in the Wing-T, but since Clemson's running game is based on that, it needs to be covered. The DE described above has the assignment of "Contain", meaning his job is to keep the play from getting outside. There will be defenders coming into the "alley" outside of him in most cases. The first player is called a "primary force". It will usually be the OLB or SS, but it could be the CB. The hammer block is meant to take care of the force outside, and the ball is meant to go inside this block. In the log, the ball goes outside. Someone else has the force player when the RG executes a log. 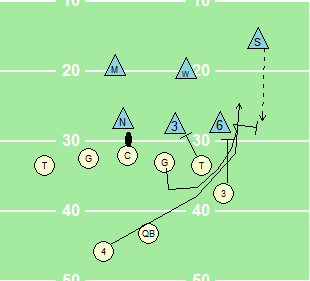 The 5th step is directly ahead as the RG picks out the force player and reads his actions. The next step is at 45 degrees and is called the hammer step, done with the inside foot. His outside foot steps at 90 degrees so that he can hit the upfield shoulder of the force player, and then he moves in a plane parallel to the LOS. He regains the proper base and hits the defender with his right shoulder. If the defender is on top of him thats OK, the goal here is to make him run around the hammer block. The ballcarrier should already be past them both. If he isn't, the RG drives the force player outwards towards the sideline, or pushes him into the backfield but wider than the ballcarrier should be.

The kick out block starts to change after the 2nd step, here its not important to get depth behind the line, and the block is more like the long trap. A kick out puller keeps his shoulders perpendicular to the LOS and his job is to kick out the force player, or whomever is the end man on the line.

If the RG is running a kick-out he should hit the defender with his right shoulder and force the man out of the way, either wider or deeper than the ballcarrier. The back is meant to cut inside a kick-out blocker. 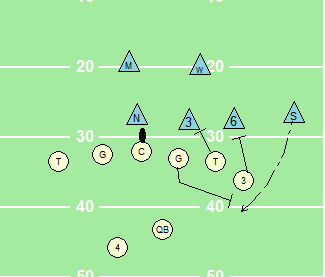 The LG in a bucksweep is typically just doing the wall or log block. If you see him kick out close to the line on a bucksweep, someone has either failed in their blocking assignment or penetration has occured. In some other cases his kick out could be deeper and of a secondary force player (like a CB).

The long sweep is common in the bootleg/waggle and is also used in the Power O play, but that can vary.

It starts out identical to a long trap, and he keeps his shoulders roughly parallel as he crosses behind the Center to the playside. Its important here that the split between them be big enough so that he has room to clear behind the Center and not hit the QB, but also not slow himself down after his bucket step. Just like before, he should gain depth by his 3rd or 4th step and be about 2-2.5 yards behind the line. 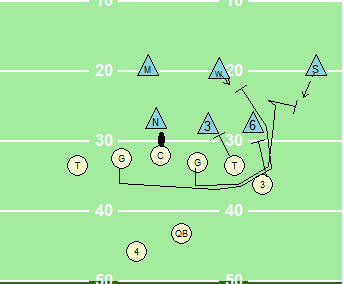 If he's running a wall-off technique outside, he fits off the tail of the blocker assigned to seal the edge, which is the 3-back/TE in the diagram. His eyes should lock on the outside hip of the blocker there, but be able to adjust if penetration occurs. In a bucksweep, it would probably be in the gap where the RG was just standing (the 3-tech). He puts his inside shoulder into the nearest defender's outside shoulder, and it should almost always be the LB if the end man has done his job right.

Power O in our tight A-gap/B-gap fitting play is started the same, but the backside guard quickly squares back up to double-team an interior lineman or create a gap in the defense. In this case the backside guard is executing a short sweep. An outside Power play would be the same as above, and he would be assigned to wall-off the edge defender or assist in such to create an extra gap for the defense to cover, but in some cases would have a kick-out assignment.