We previously looked at financial numbers from Clemson and other ACC schools. In that piece, we used http://ope.ed.gov/ as the data source and attained some granular information regarding Clemson and their in-conference foes. There are differences in some numbers, surely based on accounting practices and/or assumptions made by the source data but largely the numbers below are similar to the ones shown previously (as expected). If you are curious, we outlined the IPTAY/AD budget with the information we believe to be most accurate. This is information we obtained from Katie Hill at CU directly.

The big purpose of this article is to present data from the USA Today source. This will allow us to continue to use the USA Today data when comparing teams outside of the ACC. This consistency is necessary for an apples to apples comparison across the board.

As mentioned in the prior article, when the USA Today data dropped we planned to look at that data and remain consistent with articles published here in previous years. The USA Today updated data can be found here and, I will say, their data presentation is clean and extremely easy to dig through. I will go ahead and point out that information is labeled by fiscal year. I assume the USA Today begins each college/university's FY11 fiscal year on July 1, 2010 and ends on June 30, 2011 for this data set (consistent with a 2010-2011 academic budget as well). I will also highlight the fact that USA Today only presented information on public colleges/universities and showed no data for non-public ACC institutions.

Note that the primary difference between this article and our previous comparison is the data source. The first was ope.ed.gov, and this one uses the USA Today data. We are building a common baseline for comparison.

Below is how Clemson compared to the rest of the ACC in terms of revenue generated for FY '11. 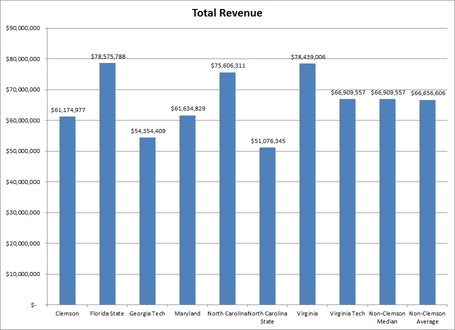 Here is the pure data:

Interestingly, Clemson is well below (over $5 million last season) the non-Clemson ACC revenue median and average. Clemson trailed FSU and UVa by nearly $17 million and UNC by over $14 million. Clemson also trailed VPI by nearly $5.8 million. Clemson brought in more cash than Ga Tech and NCST and was pretty much equal to Maryland in this category.

The expense data played out as follows: 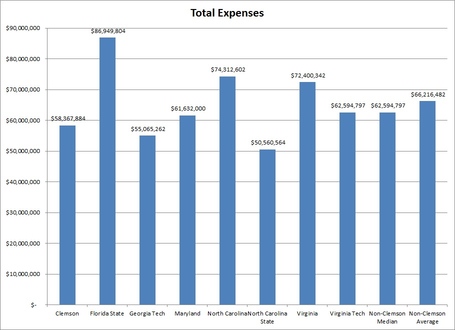 As expected, the same schools who out-earned Clemson also out-spent our Tigers. Clemson was $4+ million below the median in spending and nearly $8 million below the average. The number that probably sticks out to you the most is Florida State's eye popping $87 million in spending last year, which we will discuss further in the profitability section below. 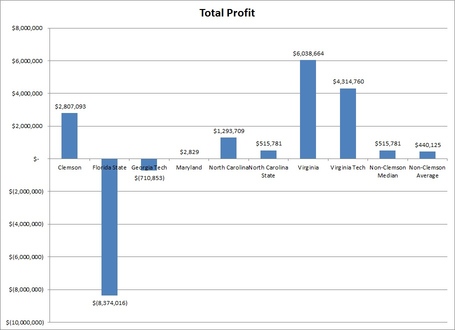 Clemson ended up in good shape profit-wise compared to their ACC foes. Both schools from the Commonwealth of Virginia raked in the cheddar. UNC posted $1.52 million less than Clemson's $2.8 million, though still impressive. GT and FSU both spent more than they took in, with Florida State's $8.4 million in deficit spending being the number that sticks out most. I suspect these numbers are the product of increased facility spending (nearly $10 million year over year increase from FY '10, according to USA Today). The ope.ed information attained did not show such a deficit for the Athletics Department, so some of this may relate to accounting practices and interpretations by the data sources. Tomahawk Nation looked into this item in detail several weeks ago and can provide better explanations than me.

In general, Clemson sat near the center of the statistics when compared to other public ACC schools for FY '11. We'll use these data moving forward to try and compare the ACC/Clemson to other schools/conferences around the country.