This is our big "Nancy" post of the year and our chance to let you know if our team was properly dressed during the previous football season. While we realize that uniform choice does not win football games, we do take the uniform combination seriously. We personally enjoy seeing the traditional look out of our Tigers. Orange shirts/white pants at home, white shirts/white pants on the road, the occasional orange on orange for really big games if the team has earned the privileged of wearing the orange pants. In addition to the sharpness this look brings to the field, such consistency brings a traditional look and brand to television sets across America. When people see the paw on the helmet and a consistent uniform look, they know Clemson University is playing football. The purple/orange hodgepodge we saw in previous years detracts from this concept and is, honestly, rough on the eye. In all honesty, can you expect a team dressed as though they are participating in some sort of Barney the Dinosaur convention to be taken seriously? No, but you can respect the consistent look we provided in the 2011 campaign.

A couple years ago we pointed out that our football team was routinely dressed like clowns. Last season saw quite a few combinations that invoked that fingernails to the chalkboard feeling. I must give credit to those in charge, starting with Coach Swinney and working its way down to all others involved in uniform decisions. The 2011 Tigers made good uniform choices all season--which is something that has been lacking in Pickens County for many years. I commend Swinney et al. for resisting the urge to mix in purple and stick with white pants exclusively on the road. While I think we may have slightly overused the orange pants, the revised look for '11 was definitely appreciated here at STS. We hope to see more of this type of uniform selection in '12 and beyond and hope the staff took all things purple and and started a bonfire with them.

The table below identifies the uniform combination and provides a link to the source pictures shown below.

Clemson opened the season with an excellent home uniform choice. We believe that the Tigers should rock this gear during the majority of their home football games.

Clemson continued with the fine choice in uniform selection against Wofford. Notice the Tigers realized this was just a normal game and stuck to what we like at home: orange shirts on white pants. Two games in and two excellent choices in gameday gear.

Clemson hosted defending national champion Auburn in a belt game. The Tigers chose to wear orange on orange. While I don't necessarily mind that CU broke out the orange britches for the defending champs, I was a little skeptical and might have waited until this group won a few more games. The Tigers did, however, roll up Auburn so I ultimately have no qualms regarding the threads.

Next up, Florida State. Two weeks in a row with the orange pants. Ordinarily I'd say this is way too much of the special britches but this was probably the biggest ACC game we played in the regular season and against the most talented squad within the Atlantic Division. Fortunately, Clemson did not see the necessity of breaking these bad boys out again at home because, well, the rest of the home schedule wasn't worthy of the orange pants. For that reason (and the fact that Clemson was at home and knocked off the Seminoles), I have no problems with back to back orange pants.

Clemson took to the road for the first time in '11 at Virginia Tech. I will admit, with acceptable uniform coordination to this point, I was a little concerned about CU's getup for this one. Fortunately, Clemson sacked up and wore our favorite (and, in my opinion the only acceptable road combo) road gear. White shirts, white pants. They looked sharp too. Excellent choice by Swinney and crew choosing this combination. 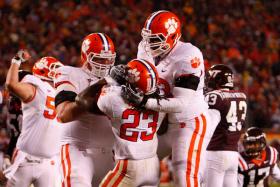 Clemson again chose a great look against the Eagles of Boston College--the standard orange on white at home.

Back on the road go the Tigers and this group again went with the sharp looking white/white look. I love it and was pleased to see Clemson sticking with the more traditional look. Here is how it looked in College Park: 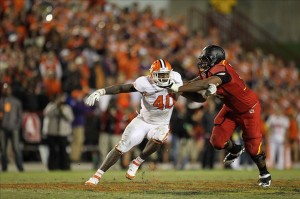 Georgia Tech: This was really the lone questionable attire choice I had all year. Clemson chose to rock the orange britches on the road at Georgia Tech. We all know that Ga Tech asks the visitor to wear their non-white tops. At the time, Georgia Tech wasn't as highly regarded as I'd like to break out the orange britches. Further, we played in someone else's crib. If we can't rock the white/white during road games at least leave the orange pants at home--especially if the opponent is gonna whip our Tigers all over the field. 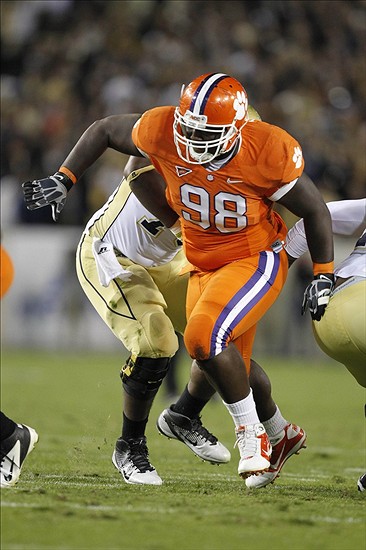 Wake Forest should have been an easy win for the Tigers. Clemson did win and clenched the ACC Atlantic Division crown in white pants. That is the way it should be--another nice decision.

Clemson traveled up to NC State to wrap up the ACC regular season. The Tigers again had good looking uniforms even if the product on the field wasn't so pretty. White shirts, white pants on the road is perfect. 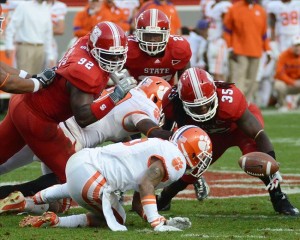 Take the previous comment, replace "NC State" with "USC," then remove the acronym "ACC," then view the picture below. 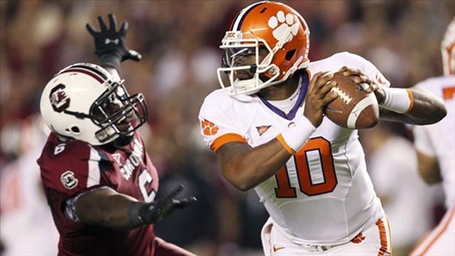 Clemson then rolled into the ACC Championship Game and played out the way they should have--as just another game. The team won the school's first ACC football title in 20 years pimping orange shirts and white pants...excellent touch. 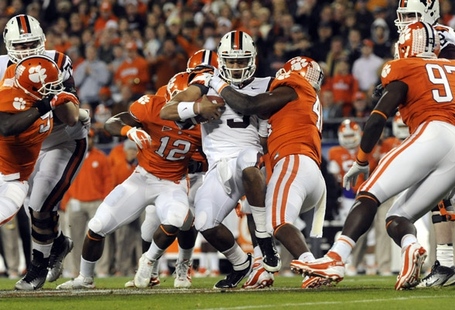 Orange on orange was the choice for Clemson's return to the Orange Bowl. Indeed, this should have been the capping moment on an ACC Championship season and the only game on television that night. The concept of Clemson's first BCS contest was worthy of the special britches (though its performance that night was not).

As you can tell, I was quite pleased overall with the uniform selection. The only real question I had was the Georgia Tech orange pant selection. I thought twice about back to back orange pants but the circumstances entering the game justify both uses of these britches. I was particularly excited to see omission of purple shirts and/or purple pants throughout the 2011 season. Clemson also maintained a jam up look on the road, maintaining white pants each time the team wore their white shirts. All in all, this past season's uniform selections far exceeded expectations. I only hope that the staff will build on this momentum, mix in the white pants a couple more times, and keep our team looking sharp in '12.