We've covered the basic combo and inside zone block along with the simplest single-man blocks and before I talk about the pulling blocks that are so essential to Morris' running game I have to mention the Cross block and Fold blocks.

Cross blocking is a scheme using two adjacent blockers who both perform angle blocks in opposite directions on down defensive linemen. Its a common way to get movement and trick the defense when they have to walk a guy out of the box in coverage, or against an Even 4-4 front, but otherwise is a bit risky to try. Since spread teams go with 4 and 5-wide sets often, you see them run this one occasionally, but its also a good thing to try in the I-formation with a FB lead blocking the Isolation play.

In a cross block, the blocker on the outside goes first and executes a basic down-angle block (towards the Center). At the same time, the inside blocker takes a position step with his outside foot, which opens his shoulders for his down-blocking teammate. The inside guy jerks his elbow back to open his hips as his teammate crosses his face, and his eyes lock onto the hip of the man who was matched on the outside blocker. In essence, they trade defenders to block and the inside guy is executing a short trap-style or G-block to the outside.

The diagram below shows how this can work, with a 3-technique DT on a Guard, and a 6 or 7-tech DE on the Tackle. The Tackle executes the same down-block we discussed here on the 3, while the Guard steps around behind him to attack the DE. The real trick to making this work is for the Guard to be able to fit tightly off the butt of the Tackle and attack from the inside-out; he cannot be lazy in getting over there to hit the DE and he cannot take a wider path. 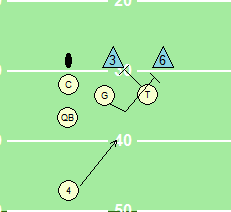 What the Guard ends up doing depends on the type of defense the opponent plays. A read-and-react defensive line (like a 2-gap 3-4) would be reading the blocks of the OL. The DE would read the OT going inside and react by trying to hold him up a little or deflect him. In that case the Guard ends up executing a Fan block that we've discussed before. If the DE is on an aggressive defense that cares only about penetration, the block ends up being a kick-out pull. 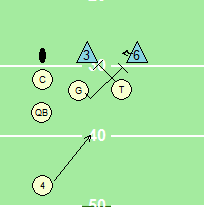 Cross-block against a 6-tech DE playing a read technique and following the blocker. 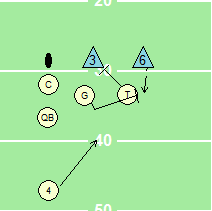 Against an aggressive scheme, the G-block becomes a kick-out block.

In either case the RB is meant to go right between these two blockers.

Therein lies the problem with running it against a team with 7 men in the box, and this type of block is usually called based on the defense that is shown and the relationship of the LBs to the DL. There is supposed to be a LB either behind or between the 3 and the DE, and the RB would run right into him. This is why theres a good opportunity to try this kind of attack when the offense motions a H/RB/WR out to the weakside, which Morris and many spread teams love to do. If the defense is a 4-3, and not in Nickel package, then the LB would nearly always be walked out on that man. The exception would be a defense that prefers to adjust with the FS on the slot man, leaving the LB in the box. 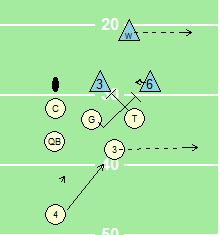 The H-back, or 3-back, gets shifted into the slot, and the WLB walks out, leaving a big bubble uncovered.

With the Iso play, there is a lead blocker headed into the B-gap ahead of the RB, and its his job to take out the LB in the hole, so the same problem isn't there in scheme. The FB just has to make the block. 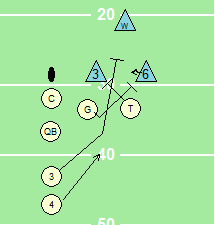 One would probably not run this scheme when the defender on the Guard is aligned in a 2 or 2i-technique, because the Tackle won't get over there, and likewise you wouldn't run it much against a 4i-5 technique DE very often because the Guard will not get over quick enough, or because the 4i will stop the Tackle from executing a good down block.

The Fold block is similar, and has specific variations for different defensive fronts, but it can be used on a counter in the same way. In the Fold, the inside and outside guy have different techniques on a play, like the Cross, but it can vary depending on which side the fold is run towards. Usually its run with an uncovered lineman blocking the man on the covered lineman adjacent to him. The real difference here, to me, is that the cross block involves swapping DL responsibilities, whereas the fold is meant to free one OL up to hit a LB. 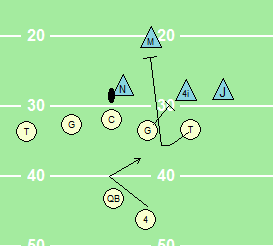 The lineman whose job it is to block a down defender goes first with an angle block. In the inside-fold, the OL to the inside goes first into the defender on the outer offensive lineman. For example, a 4i-technique is lined up across from the OT, and the Guard executes a fan block outwards on the DE. The OT executes a Loop. He takes his first bucket step, giving ground away but trying not to turn much, and the second step should crossover and come down behind where the Guard was standing. The intent is for the OT to keep his shoulders as parallel as possible to the LOS, so he can always have an eye on the LB. He's now two steps behind the LOS, and can read both the fan block by his partner and the movement of the MLB. He'll push off his outside foot into the hole and fit up with the LB as if it was a normal drive block. This particular fold block is called a GuT.

We do use the outside fold block often here as well on outside zone plays or anything meant to hit the off-tackle alley, and its just the opposite. The Guard steps back and then comes around the Tackle's butt to take on the OLB, while the Tackle takes on a 2, 3-technique or 4i-technique himself. On the strongside, a TE may be used on a wide 7 or 9-technique DE and the Guard fills the hole.

A Deuce block is an inside-out combo used on the playside of the Counter Trey. The typical counter trey has 3 OL blocking down, with the 2 backside linemen pulling around behind them (or one OL and an H/TE, called a Counter H). 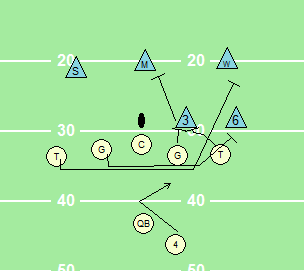 Just like in the combo block, the inside guy can "hang" on the defender across from him as he drive blocks him. A deuce block begins like the combo or double-team block, with the inside guy drive stepping with his right foot. The outside blocker begins with a down-angle block on the same defender but ends up doing the same thing that he did in the inside zone block.

The first goal is always to move that 3-technique DT, and each OL takes one side of his body as they move him upfield. Remember, it is his job to split the double-team by lowering his pads and ripping upwards, and so each OL must get a hand under the armpit of the DT to prevent him from sinking and stepping between them. If you cannot move the 3-technique, this play will be forced to go wider and you may have problems gaining yardage.

Once the Guard engages, he sticks on the DT until either the OT has faced up to take control of the block and bumped him off, or the LB has properly read the counter flow and started working playside. This hopefully occurs by the 3rd or 4th step upfield. His ultimate responsibility is not to block the DT; his man is that backside LB (the Mike above) and he should seal the backside pursuit. If the LB is slow, the Guard can stay with the DT as long as there is no threat to cut between himself and the Center. In essence, he's blocking the DT with one eye always on the LB to his inside. 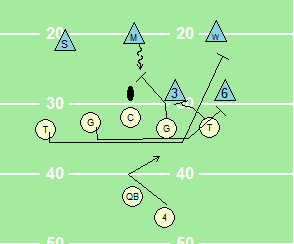 This is where the film study and knowledge of defensive alignments comes in. If that Guard sees the LB aligned in a technique that makes him a direct threat, such as a tight 10 alignment or a possible blitz, he has to alert the Tackle that he's going to break off quickly. This changes the Tackle's job a down-angle block with no help inside. Which in turn will change the aim point and hand/foot movements of the Tackle. Remember the RB is coming right to them behind his pulling blockers.