We again compare Clemson and the ACC with another conference, this time the Big 10. All data shown in this article was attained through the USA Today website and pertains only to public universities who disclose this information. We have performed similar assessments to compare our Tigers to teams around the country. You can find this information in the "Financial" link on the front page's sidebar (here is the link). I'll also point out that this data reflects items from the FY '11 time period. I'll point out that Nebraska was in the Big 12 for most of this period.

We'll begin with revenues. As shown below, every school in this survey generated more revenue than our Tigers. The B1G conference revenue column was highlighted by Michigan, Ohio State, and Penn State who each easily brought in over $100 million in FY '11. Indiana and Purdue were the only teams outside of Clemson with revenues below $72 million. All of these numbers put Clemson $23 million behind the B1G median and $31 million behind the average revenue. These schools bring in serious cheddar. 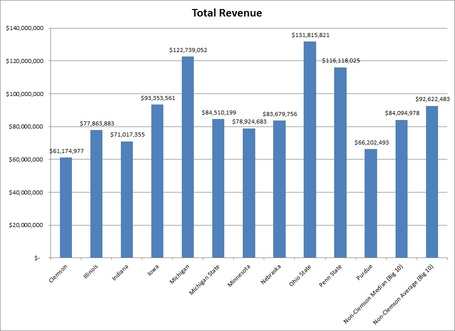 They make a lot of money and, yes they spend a lot as well. Big 10 teams averaged $87 million in spending and the median team spent over $82 million in FY '11. The big three (Ohio State, Penn State, and Michigan) shelled out over $100 million each. Again, Indiana and Purdue were the lone schools in the same category as Clemson--Purdue spent approx. $5 million more than Clemson and Indiana $10 million. 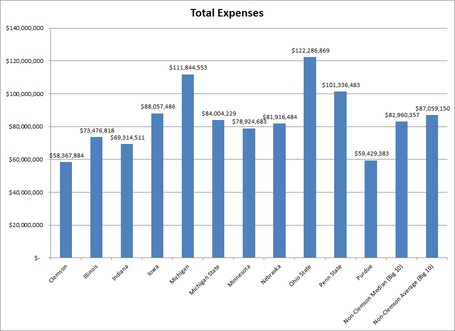 Profits for the Big 10, because of the large revenues, easily eclipsed Clemson's last year. 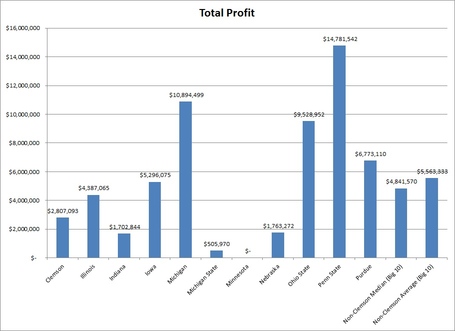 Again, Michigan, Ohio State, and Penn State led this category. Clemson was respectable in this category but still tailed the median and mean by several million dollars. Minnesota broke even and Michigan State raked in just over half a million federal reserve notes. Indiana and Nebraska also trailed CU in profit.

The ACC, like Clemson, largely trailed the Big Ten in areas reviewed above. 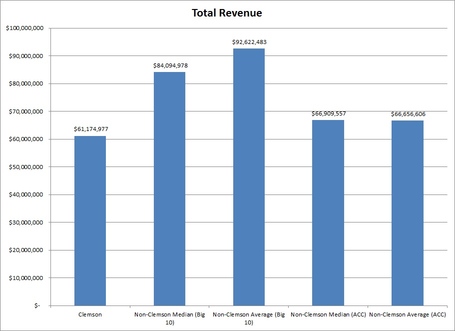 Non-Clemson ACC teams trailed median Big 10 institutions by $18 million and were $26 million below the B1G average.ACC teams also spent a lot less money than their Big Ten counterparts as shown below. 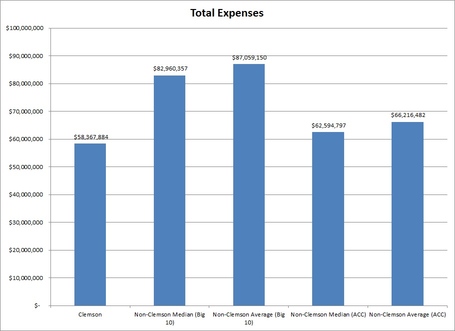 Finally, the Big Ten schools netted quite a bit more than Clemson/ACC institutions. Profits for the B1G universities completely clobbered those of Clemson and the rest of the ACC. 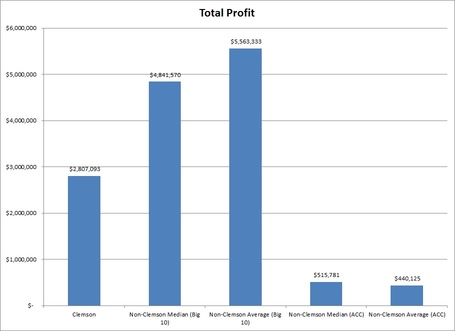 As you can see, when Clemson and the rest of the ACC public institutions are placed against schools from the Big Ten they are easily outgained and outspent.