The Combo and Inside Zone blocks together deserve a single post because they are so close to each other, but not every inside zone is the same as a combo and they aren't necessarily double-team blocks, which in a sense is a waste of a blocker. The point of the combo block, and the other combination scheme the Zone, is to be flexible and adaptable to the multiple fronts that modern defenses use. Its pretty rare to find a team that sets up in the same front every down as was once common, but I think the combo & zone really became popular as an offensive adjustment to the 4-3 Stack/Over fronts.

A successful combo block achieves two objectives (1) the down defender is knocked off the ball and sealed inside, and (2) the scraping linebacker is cut or blocked by the seal blocker. The combo block is very nearly identical to the double-team block, both consist of a post blocker and a seal blocker, which are adjacent linemen. The difference between the two types of blocks is the intent: a double-team block ends up with two OL sticking on the defender until he's on his back; the combo moves the defender and one lineman peels off to attack the LB.

The post blocker is the man on a defender. He works himself to the playside during the block. Both blockeres are reading the nearest hip/knee/foot of the defender to determine a stunt direction. The seal blocker is the outside of the two adjacent linemen who steps laterally inside and strikes the defender with his shoulder pad. His arm should work like a hook and try to catch the DL when he lowers, but his punch aiming point can be from the outside number-shoulder. The seal is there to help turn the defender's outside shoulder and lift it. Once his pads are elevated, the defender presents a large surface for the inside blocker (the post) to grab and push downfield.

In the example below, the Guard & Tackle are the Post & Seal blockers on a 3-technique DT. 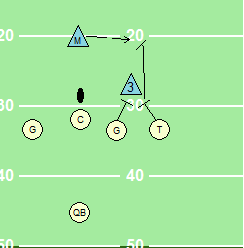 In a true double-team block, there would be no accounting for the LB by the G-T combination. Here, the Tackle helps generate the initial movement and turning of the shoulders, but then breaks off to cut the LB or block him from outside leverage.

But how does the defense try to adjust, or what exactly prompts this offensive adjustment?

The 4-3 Over front sets the LBs in a stacked or offset-stack alignment, meaning they are either right behind the DL or offset to one side of him. However a defensive front like this has several bubbles that are vulnerable to the running game. Offenses would run the Isolation right into those bubbles and once the LB is neutralized, its almost sure to get 3-4 yards. If he can't be neutralized because of his speed relative to the FB or lead blocker, you need a way to help keep him on his toes instead of running into the hole. Additionally, stacked fronts like to use stunting to keep an offensive front guessing.

Combo blocks are one way because of the flexibility in the rules. This really starts with the rules for the post. He doesn't have a fixed side to step to, he can go left or right with his first drive step depending on his anticipation of the first move by the defender and that defender's alignment.

For example, a DT aligned in a 3-technique is unlikely, unless he's sufficiently fast, to be stunting into the A-gap. The Guard knows this, and will initially step outside. However, a 2i-technique would change his first step inside. Film study would be required to prepare for a front that uses a lot of head-up 2 tech DTs. The offensive lineman stepping inside against a 2-tech positions his body inside so the defender cannot run right into the A-gap. This type of flexibility is not there with every blocking rule.

If the 3 is successful at stunting inside, you can nearly always expect a LB to be coming tight off his backside into the B-gap. The defense will always have a body to account for every gap in the front, but how they perform run fits can vary. In that case, the seal will be looking at the 3 and once he sees him work inside he must lock his eyes on a 'backer.

Another item that helps the offense adapt to stunts is the hip-to-hip feature. In any combo block the outside (seal) blocker has the duty of keeping his inside hip next to the post blocker. There should not be a gap between the G and T. The reason is obvious if you understand what a DT's job is off the snap. DTs very often face 2 blockers, and his first lessons are to lower his pads and rip upwards to break the combo. He is taught to swat their hands away and get himself between the two OL. If he can get between, then he has outside leverage on the post blocker, and will likely get free. The combo blockers work in tandem to prevent him from lowering his pads and their hand placement (the DT's armpits) helps accomplish that. It is primarily the responsibility of the outside blocker to keep the hip-to-hip relationship.

The seal blocker should remain engaged with the DL until one of two things happen: (1) the defender is moved off the ball or (2) the defender has worked himself across the face of the post. In the above example, if the 3 worked himself inside the Guard, the Tackle must release.

After he releases, the Tackle has a choice of either cutting the LB by driving (with his head up) into the hip/thigh pad of the LB or fitting up with outside leverage and drive blocking him.

On the other hand, if the DL stunts outside, the combo converts to solid and they both continue to drive the DL without releasing. This is a difference between the combo and the inside zone.

The IZ is both a playcall and a block rule, but zone rules are the primary run blocking rules for our inside game. The blockers here are termed frontside and backside by most (because same terms apply to OZ) and it involves blocking a general "area" instead of a person. Technically the simple zone rules adapt to every single thing the defense can do, so long as you can account for everyone schematically, but in practice I think the zone is a difficult thing to master and must be drilled constantly against every possible front the linemen can see.

The frontside blocker is the playside lineman, depending on where the play is designed to hit. Almost all of Chad Morris' plays are A-gap zones but the plays can be altered depending on the talents of the offensive linemen. If your Center and Guard on one side are better, you would hit their common A. If the Center is young but the G-T are good, then the aim point for the RB can be shifted to the B, etc.

The frontside blocker steps with the nearest foot to the defender no matter where he goes. His job is to stay on the playside of the defender without being snagged up by that defender, so he has to keep his playside arm free. He "hangs" on that defender with his backside arm when he does not see a LB to his "area" and the two OL work to generate movement upfield. If the LB is set to his area, the frontside man yells "zone", telling the backside blocker that he is releasing, and proceeds downfield to fit up with the LB.

If movement is generated by the tandem fairly quickly, and the backside has control of the defender, the frontside blocker can release anytime and attempt to cut off any pursuit from scraping linebackers.

It sounds very simple in principle. The trick is doing this right of course, and recognizing when to hang and when to release. Basically if you are a Center and theres a 0 or 1-technique on you, then you will initially engage him no matter which way is playside. If the 1-tech is on your backside shoulder, you will be the one that can release. If the Nose is a 0 or 1 playside, then you will be the backside blocker and won't release. However, his stunts can throw it off if he's allowed to break the initial combo hip-to-hip relationship, and a LB blitzing into your area will force you to yell "zone" and release before your teammate can get leverage to control the defender. 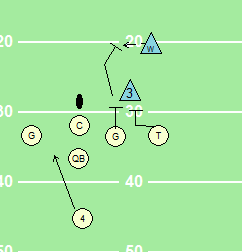 The G is frontside, T backside. Frontside engages and releases to hit a scraping LB into the "area" in front of him. 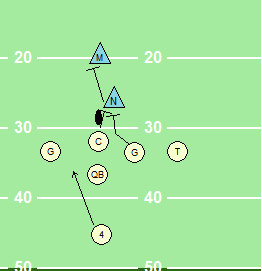 The NG is shaded backside. The C can attack playside, and engages then releases to hit the MIKE in his area from the outside-in. 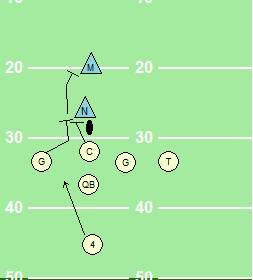 The NG is now playside, so the Center steps to reach block him, and is the backside blocker in the zone tandem. The G is frontside, he attacks and releases to cut the MIKE.

I think it can be difficult to get the first two steps in the correct positions and angles correct, especially when you mix this type of scheme with other blocking schemes. If you want to run the zone, then this adaptable call has to be repped for all the possible fronts the defense shows you, along with stunts, for all the run calls the offense has. With especially bright OL, and/or a great coach, then these simple rules can be drilled into them quickly and then they can get back to mechanical issues like hand placement.

Ultimately though, if you cannot accomplish a drive step and secure a fit, the blame isn't on the scheme being zone vs gap style running. If the call can't be run to either side, then someone isn't executing these rules, and probably because their first two steps are wrong and/or they're just not functionally strong enough to use the power from their lower body to generate downfield movement of the defender.