Inside the Clemson Offense: Pistol Formation use from 2011

Share All sharing options for: Inside the Clemson Offense: Pistol Formation use from 2011

When we began looking at the Pistol Formation, I explained this would simply be a wrinkle to augment and/or highlight things that Chad Morris already did with his offense. To further illustrate this point, we'll look today at a couple things Clemson did last season out of the Pistol or a very similar formation. The illustration below shows two formations used by our Tigers last season. The first is a standard spread formation. The second varied the first by moving the QB closer to the line of scrimmage and having the RB take a step or two back. The result was effectively what I'll refer to as an "offset-Pistol." 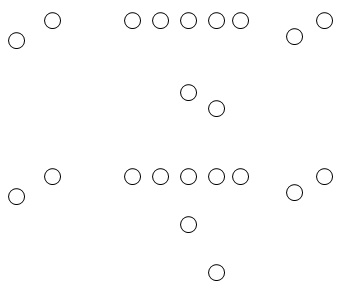 One of the reasons Morris implemented the use of Pistol was to improve upon short yardage situations. The gun simply takes too long to engage in many running plays and, unlike under center formations, does not allow the running back to be moving downhill when he takes the handoff. The Pistol combines Morris' direct snap while allowing the back to move towards the LOS during the mesh point and doesn't mean he comes across the ball every time.

The first scenario shows Clemson in the Pistol formation similar to the one shown in the above illustration. The Tigers bring the receiver lined up off the LOS into the backfield via orbit motion, creating an "I" backfield. Clemson then runs the Power play (with the possibility of an option wrinkle). I don't think Boyd/Morris had any intention of pulling the ball and getting to the corner in either of these cases, because of Boyd's inability as a runner, but do want to illustrate the flexibility of some of these items. Here is how the play looks on paper (with the dotted line being Andre Ellington using his vision to cut back): 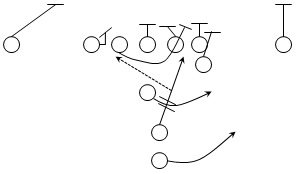 In this scenario, Ellington runs the basic Power play for a TD.

Here, he uses his vision to cut back and pick up the first down.

If this play looks very familiar...well it should (our analysis of the power play out of CU's base set).

Here Clemson runs a very basic play in a 3rd and 1 situation. The Tigers downblock across the LOS, with the playside tackle illustrating the Gap/Down/Backer concept we discussed last summer. We bring the H-back across the formation to seal the end and occupy the playside OLB with orbit motion. Ellington hit the one-gap quickly for the easy first down. 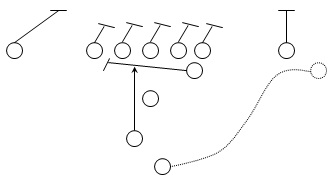 Clemson combined the previous two plays to again try and create an opening inside the tackles. Below you'll see playside Gap/Down/Backer. Clemson seals the end with the playside upback, pulls the backside guard and brings the H-back across the formation to lead. In the example below, Bellamy could have attempted to hit the hole hard but instead bumped the play outside and used his natural ability to gain some nice yards. 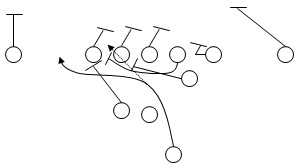 The Pistol is pass friendly as well--in fact our Tigers did throw the ball out of this set last year. Below you'll see nothing but basics. The routes and protection schemes mirror most things we saw last season. The big difference with the Pistol (not shown below) is the advantage it gives you in the play action game. Still, you'll see the back moving forward as the QB gets into throwing position--a deviation from the gun. Footwork out of the Pistol is as important as an under center snap and much more important than a gun snap. 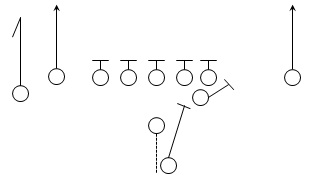 The last item we'll use to point out that the Pistol is a formation/wrinkle is Clemson's ability to run its whole philosophy of plays out of the Pistol. We mentioned that most of Clemson's running plays have a passing option (quick toss to a receiver) out of the run plays. Simply put, if Boyd sees an open receiver, he always has the option of pulling up and tossing the ball out there. In the example below, the play wasn't there and Tajh had to eat the ball but the point is easy to see.