Share All sharing options for: Run Blocking along the OL, Part II

In the previous run-blocking article, we covered the basic drive block, the reach, the down angle, and the backside cut off block. Here we want to go into the influence and trap blocks along with a few other minor one-man blocks before we get into the pulling blocks which are prominent in this system. After that, I think we'll start into the combo (2-man) blocks used in zone blocking schemes.

I dont necessarily group all influence blocks into traps, the influence block is meant to cause the opposing defender to be suckered into charging harder than he should into the backfield. You want to make him think he's gaining ground into the play in a similar way to a pass set, only to have him blindsided by the real trapper who comes from the offside. That blocker is the one running a trap block, but the influence goes with it.

These blocks were nearly outlawed when they were invented under the name "Mouse-trap" because of their trickery of the defender. It was thought to be unsportsmanlike to do such a thing. Now they are so prevalent that outlawing them would cripple the running games of many spread formation offenses, because its such a crucial play in their schemes: you have to use a little trickery when you only block with 5.

The pass-infuence is basically a modified pass set along with a trap pull. The blocker gives the defender a "high-hat" read by popping upright like he does in a passing setup. Any aggressive DL will see that and charge hard. Once he commits, he will lock his eyes on the blocker across from him and the QB, and he won't see the trapper coming from the other side. The influence blocker will push off his inside foot and head outside, similar to a G-block, and try to kick out an outside defender. If the DL has his eyes locked on the QB, he'll get nailed by the trapper pulling over, and a potentially huge hole will get opened inside. 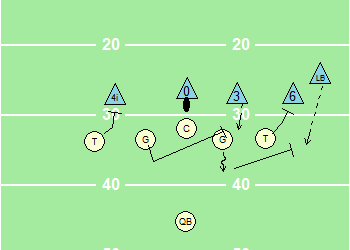 An pass-influence trap: The G across from the 3 is performing the influence, then attempts to kick the LB out. The 3 technique is trapped by the backside guard.

A pull-influence is very similar, with the difference being the initial high hat read not being there. The Guard in the above example would simply pivot out with a bucket step, push off his inside foot, and get outside to hit the 6-technique or LB. The 3 would read an initial outside pull, as would as the LBs behind him. The LBs will immediately start scraping outside, and the backside LB would need to be taken care of somehow. The 3-tech is still trapped by the backside Guard. I've drawn it up a little differently below to illustrate one way of handling the linebackers. The Tackles need not necessarily peel off to hit them, but when a LB reads a pull, assuming he reads blocker keys, he is supposed to start scraping to that side. Remember this is a quick hitter inside when done correctly. 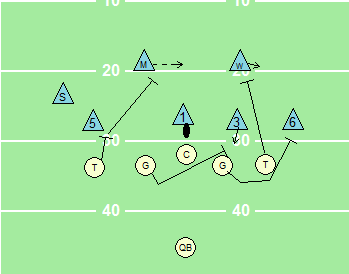 In the above pull-influence, the G across from the 3 steps out in the same way as executing a G-block pull and takes out the threat to the outside of the Tackle, or the DE if unblocked intentionally as I've drawn it. The backside G is the trapper.

The Fan is the opposite of the Down block; both are angle blocks. Here the OL is fanning outwards, angling away from the Center. The initial aiming point is usually the inside hip of the defender. It works well when the defenders are all taking outside shade alignments on the OL, and so it is normally pretty easy for the OL to execute. The running back almost always takes the ball right up the gut behind this blocking scheme, which is commonly an Isolation type of play. 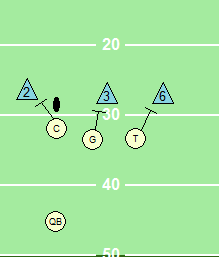 Just like the Down block, this block must be done with the correct angle, so refer to the previous article on a discussion of proper angles. It must also be tweaked a little for penetrating/attacking fronts compared to reading two-gap 3-4 defenses.

In the fan, the inside arm becomes the dominant arm of the block, opposite to the down block. The OL must bring his inside hand up into the armpit of the defender, which is meant to cause him to bring his pads up on that side. If he can be elevated on one side, he'll be off balance, and can then be controlled. Keep in mind that the inside shoulder of the outside-shaded defender is supposed to be lower for him to attack that gap, so you take all his fight away if you can raise that side of his body.

The outside hand of the blocker punches up into the middle of the defender's chest; and he needs to create a lateral movement.

The first two steps of the lineman are really important. The drive step needs to be right at the inside hip of the defender and the attack must follow to gain and hold the leverage on the correct angle like the Down block. If he goes too flat, the DL will rip and come free. If he goes too sharp, meaning his drive step was to far inside or straight, the DL will probably run right around the block.

The Olay and the Rip

This one goes with the influence block and is more of an escape move by the same blocker executing the influence above. Here he's not trying to influence the DL to come into the backfield, he just wants to get free without being engaged. The trapper comes around to hit the DL afterwards.

The Olay is a swim move by the off hand, the hand opposite to the direction the OL intends to go, in this case the interior lineman is usually going inside. He then slaps back with the other hand. The TE uses this move on almost every passing down to get free. 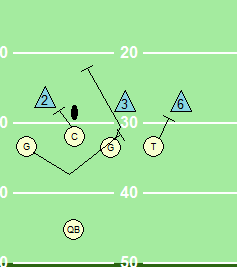 For a Guard matched on a 3-technique, the inside hand slaps the defender's arm/shoulder immediately after the first drive step. The outside hand then comes up and over the head of the DL, while the outside foot comes across. His head is up and then tracking the first LB he sees. The trapper comes off the Center's butt and should have a nice crease opened up for the RB.

The Rip is similar to the rip move used by a DT to get free. The OG steps 45 degrees to the inside and pushes off that outside foot. Then he dips the outside shoulder and rips upwards with that arm, getting free to the inside.

When the DL sees this, keeping in mind he's also taught to shoot his hands to the chest, he will not have a number to strike. He'll almost always put his outside hand on the shoulder or back of the Guard, which will actually help him get free inside. A very good one will manage to knock the offensive lineman off balance by getting his outside hand under the pads and give his linebackers a better chance to scrape free.

Once the second step is made, the OL will square up and hit the first threat.