Inside the Clemson Offense: Other Pistol Formations

Share All sharing options for: Inside the Clemson Offense: Other Pistol Formations

We previously discussed general "Pistol" formation information and identified specific Pistol formations that fit nicely with Clemson's offense. Today we will look at other formations that more closely resemble "conventional" looks. Clemson features a spread attack that uses the tight End as more of an H-back than a conventional TE. That being said, these formations likely won't be featured significantly. We are showing them to better educate folks on the fact that the Pistol is simply a formation and it is a dynamic formation. Chad Morris has these options at his fingertips should he think that one of these alignments provides a strategic advantage. As always, realize that different coaches use different terminology for their formations. Thus, you may see some of these items given different name sets in other locations and with other offensive staffs. 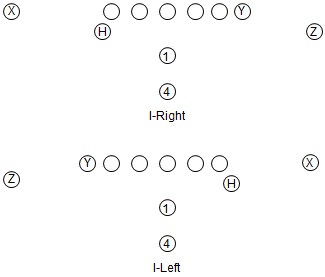 This formation features a tight end on the LOS and an H-back/wingback opposite the TE. The Right/Left nomenclature identifies the formation's strong side which is the TE side. This formation very much resembles the Pistol Ace formation (shown below). The Ace formation takes replaces the wing with a slot receiver-denoted "A" below. 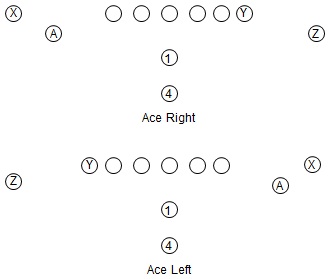 The Ace formation spreads the field and is frequently used to drive defenses to make formation and coverage call adjustments.

Similarly, a team may wish to keep the wing in the game and either flex the TE or substitute for him. In this case, the "Slot" position is used. This position features effectively two split ends and a slot receiver opposite the formation of the wing. Again, this spreads the defense while maintaining an extra blocker inside the box similar to Ace. 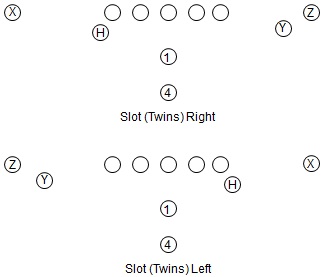 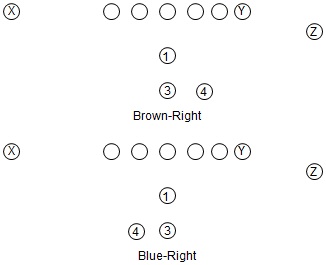 Similarly, teams may choose to implement a split back set from the Pistol snap. This is easily attainable as shown below.

A flex formation is also available and allows for similar functionality seen with Georgia Tech's Flexbone attack. The double wing pistol look allows for a lot of motion into the backfield and would cater to an option attack.

Teams can also employ the old wishbone look if needed.

Or a team could go back to something that better resembles the traditional I-formation.

As shown through the previous two articles, the Pistol is simply a formation that places the quarterback in a gun formation relatively close to the LOS with a back behind him. This formation is nothing truly unique and special to football but more of a wrinkle on a lot of old concepts. Previous under-center and spread formations are quickly and easily incorporated into such an attack to gain strategic advantages.

Now that we have our formation foundation built, we'll start showing you how our Tigers can take advantage and use this Pistol wrinkle in 2012 and beyond.