Share All sharing options for: Inside the Clemson Offense: Tackle Eligible Formation

Formations are critical for football strategy. We realize that the formation along with personnel in the game dictate how a defense will work against any given offense. Today we'll chat about a formation I noticed through Auburn film study. Clemson lined up in the following fashion several times in the home win against the Alabama's Tigers. 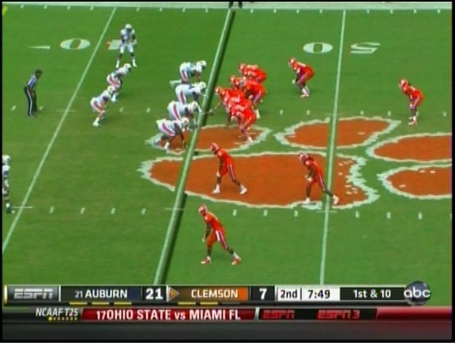 The first item you probably noticed about this set was Tajh Boyd under center. This is unique for 2012 Clemson but not the focus here. The most interesting aspect as the player identified as "5" is covered by the "9" receiver and is ineligible. The right tackle is uncovered and is an eligible receiver. Covered and uncovered are as follows: 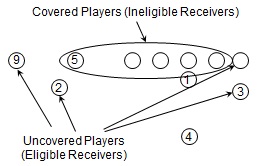 Why in the world would one ever want to cover up an eligible receiver? Under normal circumstances, you wouldn't. This receiver cannot catch a pass or run downfield in passing situations. In fact, a formation like this typically tips off the defense that the play will be a running play. In the couple plays I saw out of this formation against Aubun, that was the case. The above shown play was a pitch play to the three receiver side.

Are there any advantages with this formation? I suppose the offense could try and substitute a TE or apt pass catcher into the game for the right tackle. It is not common to have a tackle eligible so such a move could confuse the defense and potentially provide a gimmick play. You probably also realized that the defense, if it did not recognize the "slot" receiver was ineligible, wasted a defensive back covering a guy who cannot catch a forward pass. An offensive coordinator could bank on such and use this to his advantage. The offense could also try to utilize better blocking receivers and run the ball to the trips side against extra defensive backs. If anyone else has ideas, let them fly.