Tigers Look to Right the Ship in Durham

Share All sharing options for: Tigers Look to Right the Ship in Durham

After getting a nice series win last week against Miami, despite blowing the 3rd game with baserunning, the Tigers came back and thumped Tom Riginos 11-0. The next night we shit the bed royally and were swept in the season series by Western Carolina. None of our pitchers could get anyone out and the ones that did only got hosed by the infield defense behind them. We were a young team in 2008, and I expected us to be bad, but this team brought back plenty of pitching and lost the most horrific defenders at SS and 3B. Now, we're basically shit all over the infield on defense and our pitchers don't command their stuff. We'll see if we can make use of the now weakening schedule to build some confidence and W's going forward, to hopefully make the ACC Tourney first, and the NCAAs next.

This Duke team is scrappy but not very talented as you would suspect. They haven't had a lot of quality wins but have played the 12th-ranked SOS too (Clemson has played the 7th-ranked SOS). Duke lost the series' to Miami 2-1, lost to GT 2-1 (but looked pretty good), swept Virginia Tech, and got swept by FSU. Many of those games were pretty close. Stroman, who starts against us tonight, struck out 12 in a 1-0 loss to GT in Atlanta last Saturday.

Clemson and Duke have met 188 times on the diamond, with the Tigers holding a 121-65-2 lead in the series dating back to the 1904 season. Last year we swept Duke, but the year before in the home of the Durham Bulls, our bullpen completely tanked the series away. This time we're playing at Coombs Field. The Tigers hold a 47-28-1 lead in games played at Duke and a 95-34-2 advantage in ACC regular-season games. Jack has a 41-15-1 record against Duke as Clemson's head coach, including a 17-9-1 mark in Durham.

Clemson took 2 of 3 from Miami, defeated Winthrop 11-0 and then lost to Western Carolina 13-8.

Well from that you can tell this series won't be high scoring. Neither team can hit worth a damn. It might be a cripple fight at the plate.

Duke's best is Grant McCabe, leading the team with a .337 average and 17 RBIs. Andy Perez is batting .318 with eight doubles, while Will Piwnica-Worms (who has been there forever it seems) is hitting .298 with three homers, seven doubles, three triples, 21 RBIs, and four steals. Altogether there are 5 regulars with averages over .280, and Andrew Istler is batting .305 in 59 ABs.

Steve Wilkerson still leads the Tigers with a .386 batting average and is riding a 17-game hitting streak, the longest by a Tiger in 2012. Richie Shaffer is batting .343 with seven homers, 11 doubles, one triple, 28 RBIs, and a .485 on-base percentage. Pohl is hitting .315 with five homers and a team-high 30 RBIs. 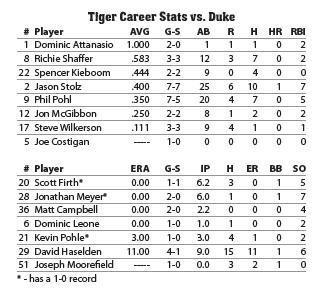 Aside from Duke's two good starters, theres not much on the staff. David Putman and Andrew Istler share the closing job, with 4 and 3 saves respectively in 21.0+ IP. No one else in the pen has an ERA below 4.05. Drew Van Orden and Chase Bebout are guys that pitch often, but with terrible ERAs to show for it. Aside from Putman and Istler theres nothing here that Clemson should not be able to handle.

Clemson's pen did CONSIDERABLY better last weekend, and then pissed down their leg against WCU. Campbell and Firth have been stout, with ERAs of 2.14 and 0.84 in 21IP. Mike Kent has also done really well back there with a 3.12 and Patrick Andrews' ERA has been steadily dropping, now to 3.14. Personally I think Firth should get moved up to Saturday's starting role until Gossett is ready for it (probably next year). Our Pen SHOULD not have a problem with Duke.