We recently looked at the 2012 recruiting cycle for the ACC Atlantic. We do realize that one recruiting class does not make a program. Accordingly, we want to put this class in perspective by looking at ACC Atlantic schools' results over the past five cycles. Five cycles were chosen because these are the only cycles that directly factor into the 2012 teams because players signed in 2008 and redshirted will be seniors this year (and all future classes have eligibility as well).

The Tables and Figures below/after the jump illustrate the recruiting star per player ranking for each team as well as the players signed data. 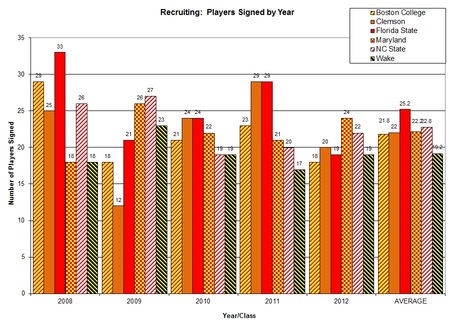 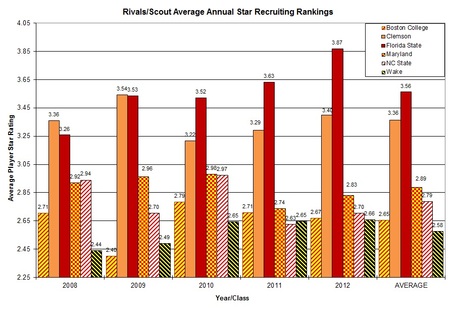 What you noticed through this data is that Clemson and FSU were the only two teams to lead the division in stars per player over this period. Clemson led in '08/'09 and FSU the last three cycles. Clemson and Florida State were the lone teams to average over three stars per player overall for both recruiting services over this time period (Maryland did average 3.01 stars per player via Rivals). In terms of Class size, Clemson's 22 players per class is about, on average, 1/4 of a signee less than the average of the other squads. Florida State has clearly been bringing in some large classes along with fantastic talent over the past five years. I should also point out that Clemson does average 24.5 signees per year if you omit the odd NSD from 2009.

Overall, Clemson appears to be in the top two in the division in terms of acquiring talent over the past five recruiting cycles. Clemson trails only FSU in "quality of talent" (i.e., stars per player) and is at average in terms of class size. While Clemson may bring in good high school talent, it is up to the individuals and coaches to turn this talent into success.