We have a couple loose 2012 recruiting items to tie together to compare Clemson's class to others around the ACC and the Southeast. We featured Clemson's class extensively earlier through a recruiting class overview and a "Did we fill our needs?" article. If you have particular questions about how we fared in the '12 cycle I highly encourage you to check out those articles. 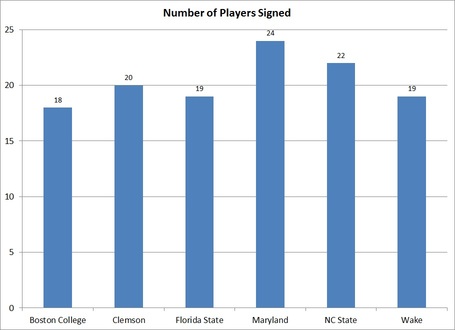 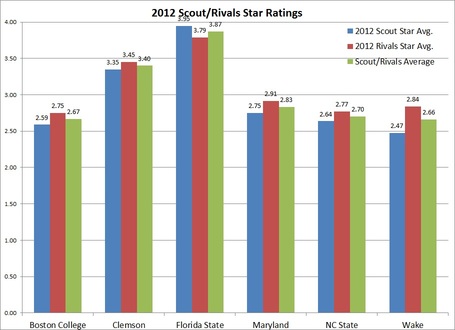 We don't generally harp on players signed for a particular cycle unless the number is extremely low or high-though some schools strategically oversign players for various reasons to try and gain an advantage. Long and short, the NCAA allows 85 scholarship players and allows schools to grant 25 scholarships per recruiting cycle. So long a coach stays within these boundaries, he can utilize his resources in any fashion. We believe there is merit in consistently getting a minimal number of players at a couple positions but also understand there will be some variability in numbers signed based on scholarships and talent available. We also, though, understand that teams who consistently weed out the weaker players annually have more scholarships to give. Thus, while this statistic is not an end-all-be-all, it does serve some purpose particularly when you look at teams who are routine winners. Thus, high signing numbers indicate (A) oversigning, (B) reaction to the environment, (C) an unusual event-i.e., Clemson's 2009 class was small because of a coaching change, thus future class sizes had more scholarships to give, or (D) turnover within the football roster. From the data above, you can clearly see that Clemson is right at the average by signing 20 this cycle. (FYI, the Clemson-excluded average class size is 20.4)

The per player star rating data gives us different information. Average star rating generally shows the quality talent a team pulls. Here you notice that Clemson is significantly better than all other ACC schools sans FSU. Florida State had a monster class and Clemson did pretty well as well, so there are really no surprises there. The other schools averaged between 2.66 and 2.83 stars per player-well below Clemson's 3.4 stars per player average.

In short, this picture is very familiar. Clemson and FSU routinely out recruit other ACC Atlantic schools on a star per player basis. Both schools are near the middle statistically in players per class. My opinion is that Clemson brought in a more talented class than the rest of the division sans FSU based on these numbers. As we all know, the end result of this recruiting will be apparent in four years and will be dictated by more than players' talent coming out of high school.