Tigers take 2 from Jackets; First Series Win In Atlanta Since '96

Share All sharing options for: Tigers take 2 from Jackets; First Series Win In Atlanta Since '96 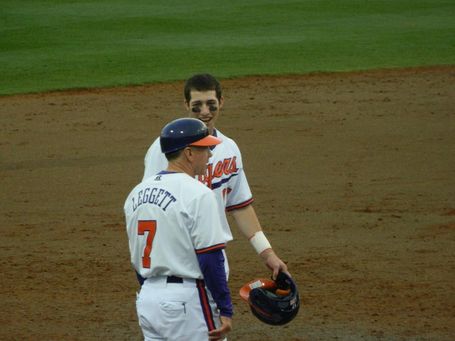 Pitching was at a premium this weekend in Atlanta, and if you know anything about how we've been playing lately, that tends to favor out guys. It ended up going our way in the end, as we took 2 games from the Yellow Jackets in Atlanta for the first time since 1996.

As great as it is to escape a "house of horrors" of sorts with a series win, this should have been a sweep. Giving up 3 runs in the 9th inning is absolutely inexcusable. Losing on a walkoff homerun sucks, but Meyer should have never been in that spot in the first place.

I won't dwell on that too much, because all in all, this team got the job done that I thought they could, they just let Friday slip. Any more games like Friday later in the season though and this team is going to find itself sitting at home very quickly.

Summaries after the jump......

Damn. Just.....damn. Brady goes 5.2 innings, gives up 2 runs on 4 hits and 1 walk while striking out 3. We took a 5-2 lead in the top of the 9th and all we had to do was get three outs to get out of there with a win. That's about as far as the good news goes for this game, because it went to shit.

Matt Campbell came on and was pitching 2.1 innings of hitless relief (although he did give up a run on two walks) whenever he left the game with an injury in the bottom of the 9th, collapsing and grabbing his shoulder. Instead of being able to ride Campbell til the end, we went with Scott Firth, who gave up 2 more runs on 2 hits and 2 walks, all without recording an out. We brought Jonathan Meyer on, and kudos to him for not only getting out of that inning without losing the game, but keeping us in the game up until the 13th inning. You can only ask a relief pitcher to hold out for so long. Regardless, we let this game get away in the 9th inning after putting ourselves in prime position to take Game 1. Absolutely unacceptable.

Thomas Brittle kept up his "man on fire" act and extended his hitting streak to 16 games with a solo home run in the 1st inning to give the Tigers the early lead. A sacrifice fly by Brad Felder in the 2nd plated Jay Baum to give Clemson a 2-0 advantage.

Two homers by Mott Hyde, one in the 3rd and one in the 6th, tied the game at 2. The score remained that way until the top of the 9th. After singles by McGibbon and Kieboom, Felder lined a 3 run shot to right field to signal what should have been the end of the game, assuming Clemson could close it out in the bottom half. Of course, after playing what was a great baseball game to that point, we found a way to screw that up. The downward spiral started with Campbell's injury. Firth got rocked, and Jonathan Meyer came on and pitched a gem up until the 13th. Meyer gave up 3 hits in 4 innings of relief, and you would have hoped that Clemson could have thrown something together by then and pushed a run across, but alas, nothing. Asking a reliever to throw that many innings is asking for trouble, and Tyler Palka proved that when he sent the first pitch of the 13th out of the stadium to allow Tech to walk off.

Two things about this game. For starters, Firth has to shut the door on teams with a 3 run lead. He's not necessarily our closer by any stretch, but he has been solid for us as of late. He got knocked around and while everybody has bad outings, he needs to step up, refocus, and get those 3 outs to put the game on ice. Secondly, we can't afford to burn out a bunch of relievers on Friday, so I understand leaving Meyer in until the end of the game. With that said, our offense has to scrap something out before the 13th inning. Manufacture some runs or something. We HAVE to help our bullpen out, because like I said before, we can only ride them for so long. I don't blame Jonathan Meyer one bit, he was out there longer than he should have been, he pitched a great 4 innings and made 1 bad pitch, and it ended up costing us.

Offense was on full display on Saturday, as runs were scored early and often in a 13-7 Tiger win. I was actually able to make it out to this game before heading over to Turner Field, and it was nice to see our guys pound the ball like they did Saturday.

Things got off to a rocky start when Tech leadoff hitter Kyle Wren hit an inside the park homer to right field. Brad Felder could not have misplayed the ball any worse in right field; what started as a chopper over the first base bag turned into a ball that kicked off the bullpen fence and all the way down to the right field foul pole. Tech took a 1-0 lead, but gave it right back on a first pitch home run by Phil Pohl in the second. Tyler Palka hit his second home run of the series to give the Jackets a 2-1 lead in the Tech half of the second. A Jason Stolz single plated Brad Felder in the 3rd, tying the game at 2.

After a single, a hit batter, and a walk, Spencer Kieboom sent a ball off the football training facility out past the left field fence to make the score 6-2. Our guys pushed across 4 more runs in the 5th on hits by Pohl, McGibbon, Kieboom, Stolz, and Brittle to give us an 8 run cushion, at 10-2.

We can't seem to stand prosperity, though, so we gave those 4 runs right back in the bottom half of the inning. A walk, two singles, and a homer spelled the end for Leone. His final line was 6 runs on 8 hits and 2 walks with no strikeouts in 4.0 innings. Not good by any stretch, but luckily we were pounding the ball. Mike Kent came on and was solid for the final 5 innings innings, giving up only 1 run on a sac fly in the 6th. Kent gave up 4 hits, striking out 1 and not walking any; very impressive for a reliever. A 2 RBI single by Pohl in the 7th, and an RBI triple by Brittle in the 9th made the final margin 13-7.

Very impressed with the bats in this game. Obviously you can't expect this every game, but it was nice to see the guys that we expected to produce at the beginning of the season (Pohl, Kieboom, Stolz) all come up with big games for us. We're going to need these guys if we're going to have any shot to make a run at the end of the season.

Kevin Pohle fell apart after 3.2 innings, giving up 4 runs on 6 hits and 3 walks while striking out 1. However, Daniel Gossett came along and threw the final 5.1 innings, picking up the win while giving up 4 runs on 3 hits, 3 walks, and 7 k's. Gossett pitched a nice game in relief, relatively speaking. We're going to need better down the road, but for today he got the job done behind our bats.

Jay Baum had an RBI single in the 1st and Brad Felder scored on a throwing error in the 2nd to go up 2-0 in 2nd. The Tigers then took a 7-0 lead in the 5th on 5 more hits, including a homer by Stolz.

Tech roared back with 4 runs in the 4th on 4 hits. Two singles, a double, and a homer got the Jackets back into the game. Tech scored two more runs in the 6th on one hit, courtesy of two Tiger walks.

Clemson managed to give up 21 runs in 3 games and still win 2 of them. Kudos to the bats for getting it done, but the pitching has to be better. Teams like Florida State and others come ACC tournament time are going to outhit us in certain games, so our pitching is going to have to be better. It should be noted that Mike Kent and Jonathan Meyer had good outings in relief. We're going to need those guys to step up big time if we're to do anything of significance come tournament time.

Clemson doesn't have any midweek games this week, thank goodness. No Wednesday games for us to lose. But we do have a weekend set against the College of Charleston starting on Saturday. We have no reason to take CofC lightly, they'll sweep us if we do. They are always a scrappy ballclub and every game for us going forward is going to need more and more. We need this series before FSU comes to town in what could be a bloodbath if we don't hit.