We stumbled upon some great information regarding receiver play during the 2011 season and want to dissect some mined information from our good friends over at www.footballstudyhall.com. This past January, these folks compiled receiver target, catch, and yardage information. We pulled the Clemson information together and will analyze these statistics in this article. We already looked at the receiver statistics and formed an opinion of their play back in February. We'll discuss standard stats at some point but today's information is related to the unique information derived from the source above. Directly from the source site, here are some definitions for you:

Targets = receptions plus incompletions targeting a given receiver. (NOTE: there is no target data for passes that were intercepted or for some throwaways. In the end, about 85-90 percent of passes have target data. I thought about adjusting for that in some way, but since it is the same for every team, I did not. Just keep that in mind.)

Target % = the percentage of a team's passes targeting a given receiver.

Target No. = the rank of a given player in terms of his team's targets.

%SD = the percent of a players targets that came on standard downs. As you'll see, this varies greatly from player to player.

I'll note that the source data had Jonathan Meeks listed with one reception. That item is incorrect but will leave this in the data. Otherwise I believe this information is correct. The nice item shown within this data is what is referred to as the "Target" statistic. This item counts the number of times a player was thrown to/towards. While some of these "Targets" are passes in which the QB was simply throwing the ball away, these numbers also indicate who will be in the spotlight when the ball is in the air.

The overall data from last season are shown at this article's end. There are really no surprises...Sammy was the target receiver nearly ¼ of the time, Nuk over 21% of the time, and Allen over 18% of the passes. If you include Jaron Brown's 9.8% target rate, these four players accounted for ¾ of the team's targets last season. As expected, Ellington led the backs with over 7% of the total targets. Overall catches pretty much fell in like (ranking-wise) with the targets. The exception was Adam Humphries who caught 15 of his 17 targets for an impressive 88.2% of catches to targets.

When we look at the overall catch rate, Adam Humphries led the group and clearly took advantage of the 17 times thrown to. Joe Craig caught three of the four thrown to him. Else, Sammy and Nuk each caught about 2/3 of their looks and Allen nearly 54%. I'll point out that these stats don't show drops so it is impossible to tell from these numbers whether balls not caught were catchable or throw-aways. 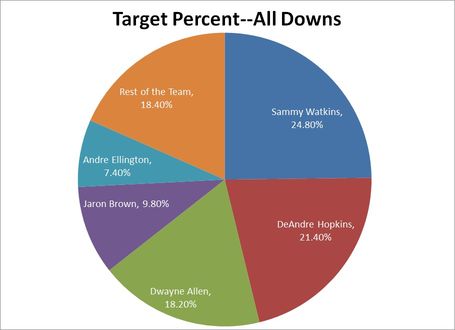 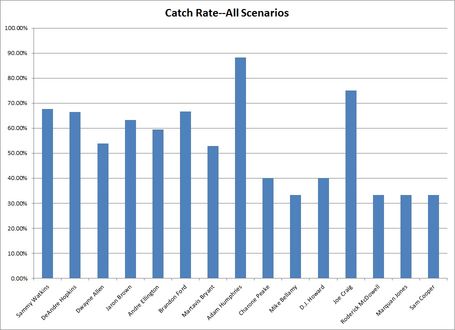 What we saw here was Sammy targeted over 26% of the time, Nuk 22%, and Allen 15.7%. Again, Humpries was impressive 12/13 catches under these conditions. Sam Cooper caught the only look he got. Both Sammy and Nuk were in the 66-67% range and Allen caught just over 51% of his looks last season during standard downs. Jaron Brown and Brandon Ford each brought down over 64% of their target attempts. Again, Brown, Hopkins, Watkins, and Allen accounted for roughly 75% of targets in this scenario. Ellington accounted for 6.8%. (hit the jump for more). 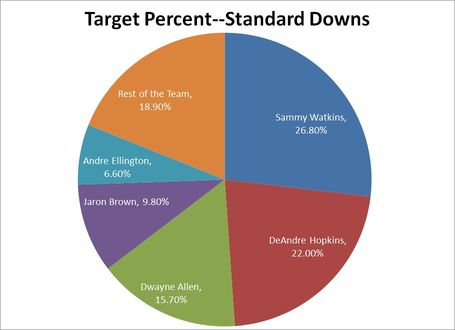 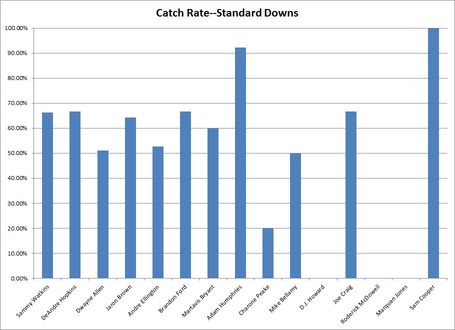 The final scenario we'll look at is "passing downs." Again, the big 4 contributed 74.6% of the targets here. The interesting item is that in passing downs, Sammy's looks actually went down to 22.2% and Dwayne Allen's targets went way up to 21.7%, overtaking DeAndre Hopkins as the second favorite receiver. Sammy Watkin's catch rate here improved to over 70%, Nuk had a slight dip to 65%, and Allen's increased to 56.5%. 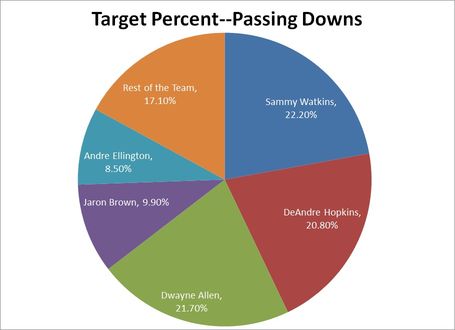 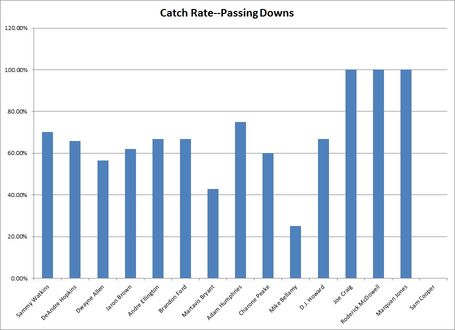