Clemson gets much needed sweep over Maryland

Share All sharing options for: Clemson gets much needed sweep over Maryland 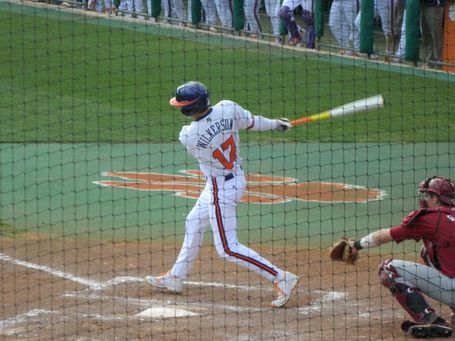 The Tigers needed this badly. Our chances of making the NCAA tournament at this point are still up in the air, but they could have been shot down completely if we couldn't prove we could handle a team like Maryland. With that said, Maryland has a VERY solid pitching staff, and I was surprised to see us put up enough runs in what was dubbed a "cripplefight" in our preview article. Honestly, that description couldn't be more spot on. These two teams are struggling for runs, and while I wish we would score more, I can't complain about a sweep when we get one.

Summaries after the jump...

Richie Shaffer's two out triple in the 9th inning gave Clemson a 5-3 lead, and the Tigers would hold on for a 5-4 win on Friday night. Kevin Brady threw 7 scoreless innings of 5 hit ball, striking out 8 and only walking 2. This is the kind of outing we expect from Brady, and it was nice to see us put up some runs, albeit only 3, to allow him to exit the game with the chance at the win. Where things get frustrating is when Scott Firth comes on and gives up 5 hits and walks 1 in the next 2 innings, giving up 4 runs and getting Maryland ssquarely back in the game. Firth has been good lately, so I'll let him off the hook, but our offense isn't good enough to put up enough runs to counter any more bad outings like the one he had.

As far as offense goes, this game was embarrassing early on. Clemson goes to the bunt early in the game and can't get the job done. After Stolz led off with a single in the third, both Wilkerson AND Brittle pop out on bunt attempts. Richie walks (go figure), and Pohl finally decides to make a team pay for putting Richie on in front of him, and gets a single that scores Stolz to give the Tigers a 1-0 lead.

Again in the 4th inning, we proved that we can't get a bunt down when Jon McGibbon bunts a ball right back to the pitcher to force Kieboom at second, who led off the inning with a walk. Jon McGibbon is useless. That is all.

Clemson broke through for two runs in the 5th inning on a Maryland throwing error and an RBI double by Pohl. Pohl came up big today when we needed him to and deserves to be commended for it. Obviously, looking at the final score, we needed the Maryland error too, as that run we scored off of it ended up being the difference in the game.

Clemson seemed to be in control of the game through Brady's scoreless 7 innings. We brought in Firth, who had been solid for us lately, and even though he struggled to start the inning, it appeared like he may get out of it. He gave up a leadoff single and then got the groundball he needed for a double play, but was only able to get the out at first. McGibbon threw the ball into the outfield after stepping on the bag. This put a runner at third and after a strikeout, two outs in the inning. After he should have been out of the inning, Firth gave up three straight hits, including a double, and Maryland had tied the game at 3.

In the 9th, Clemson got a one out single from Stolz, and then a two out walk from Brittle. After this, a situation that I've wanted ALL YEAR finally came to fruition: A team has to pitch to Richie because Pohl has been making them pay all game long. With Maryland being forced to pitch to Richie, he got something to hit, and sent a ball down the right field line for a two out, two RBI triple that gave the Tigers a 5-3 lead. It's always good when a team has to pitch to Richie, and hopefully Pohl keeps hitting the way he was on Friday so we can give Richie some more quality pitches to hit.

A two out homer by Jordan Hagel got the Terps within one in the 9th, but the next hitter stuck out looking to end the game, and Clemson escaped with a 5-4 win in the first game of the set.

Mike Kent threw 3.1 scoreless innings of relief, and Clemson held on again for another win in College Park, this time by a score of 5-3. Dominic Leone threw the first 5.2, giving up 3 runs on 8 hits and 3 walks. Dom is always shaky, but he usually gets the job done, and its hard to complain too much when he's keeping a bunch of runs off of the scoreboard.

Clemson tallied 4 of their 12 hits in the first inning, including singles by Brittle and Shaffer, and another double by Pohl. McGibbon followed with a single to plate Pohl and give the Tigers a 3-0 lead. A homer by Tomo Delp made the score 3-1, where it remained until the 4th.

Clemson pushed single runs across in the 4th and 5th. In the 4th, doubles by Kieboom and Stolz comprised the run, while the run in the 5th came on a single by Pohl after a throwing error by Maryland's catcher put Thomas Brittle, who reached on a single, on third.

4 Maryland hits in the 6th inning pushed across 2 runs. Maryland left the bases loaded but couldn't push across anymore, and this left the score at the final of 5-3.

Kudos to Mike Kent for coming on and pitching a great game in relief. He gave up 3 hits and none of the runners he was responsible for ever got past second base. Phil Pohl also had another hell of a game, going 3 for 4 with 2 RBI's. That's what I expect out of a cleanup man, and he came through again on Saturday.

Clemson completed the sweep in College Park with a 7-2 win on Sunday. Jonathan Meyer threw 7 innings of scoreless relief (and 4 hit ball), all while striking out 2 and walking none. Kevin Pohle only last two innings, giving up 2 first inning runs on 2 hits and 2 walks. It was his second rough start in a row, after getting knocked around against NC State. He needs to turn around his rough starts, because Jack isn't going to keep him in there after rough starts; we all know how Jack is.

Speaking of Jack, he's going to come out of this game looking like roses because Meyer was lights out, but this could have easily been a terrible decision. With our bullpen being like it's been at times this season, I would have never thought to trust them with 7 innings of a game. Yes, Pohle was rough early. He usually is. Jack needs to calm down with this short leash and give guys time to figure their stuff out. Pohle pitched a scoreless second inning and then got pulled in favor of Meyer. Unless he is getting absolutely shelled, there's no reason to pull the starting pitcher after 2 innings. Jack needs to learn this or our bullpen is going to let us down because we pulled our starter too early. No matter how good your bullpen is, you can't ask it go but for so long in any given game.

Maryland scored 2 runs in the first inning off of two walks, a one out double, and an RBI groundout. While I did defend Pohle when I said he needed to have time to figure things out, walks are unacceptable. Anybody should be able to put one over the plate. I can understand watching a pitcher get ripped; sometimes you're on, sometimes you're not. However, you should never put two extra baserunners on in an inning. That's just asking for trouble.

Clemson responded with a run in the top half of the second. Phil Pohl was hit by a pitch, McGibbon doubled, and Kieboom hit a sacrifice fly. Jason Stolz hit a homer in the 5th to tie the game, and Clemson broke the game open in the 7th with 3 more runs to take a 5-2 lead. Kieboom got a 1 out single, Brad Felder followed with a double and then Stolz hit a sac fly to plate the first run and take the lead. Wilkerson then scored Felder with an RBI single, and Brittle came behind him with a triple to plate the final run of the inning. This was another case of Brittle coming through when we needed him. To say he's been fire as of late is an understatement.

Clemson scored single runs in the 8th and 9th to give us the final score. Pohl continued his weekend tear with a homer to make the score 6-2, and Brittle scored Stolz with an infield single in the 9th to close the game out.

It should be said again that even though I think Pohle's leash was short, I could not be more impressed with Jonathan Meyer's outing in relief. I was leary on him after his rough start to the season, but he has come along nicely, and it would be great if this team could rely on him and Scott Firth towards the end of the season and potentially make a push.

This team needed this badly. Our starting pitching (with the exception of Pohle) did well enough, and our bullpen did just fine in shutting down Maryland's offense. Our bats did just enough to get the job done, with Phil Pohl having a monster weekend (6-for-12, 5 RBI's) that forced Maryland to pitch to Richie. It was not an offensive explosion by any stretch, but if our pitching is only going to give up 2 or 3 runs a game, you don't have to hit 4 homers every time out. Honestly, these are the kind of games I expected; Clemson pitching shuts down whoever we're playing, and our offense gets enough runs to get the job done. Granted it WAS Maryland, but their pitching staff had me worried about the kind of offensive output we would get.

After this sweep, we're sitting in a tie for 4th place in the ACC with Miami. We have a 12-9 record, with games against Georgia Tech, Florida State, and Wake Forest remaining. In a perfect world, we sweep Wake Forest, sweep or take two from Georgia Tech, and steal one from Florida State to leave us at 18-12. That would put us at no worse than probably a 5 or 6 seed in the tournament. This probably won't happen, but as we've said multiple times in our reviews and previews of this team's series, you just never know with these guys.

Clemson gets back into action with a home game against Coastal Carolina on Tuesday, and a weekend set in Atlanta against Georgia Tech. Honestly, to get back to where we normally expect our Tigers to be, we need to sweep these games. I'm just thankful that we're not playing Coastal on Wednesday, given our lack of success on that particular day of the week. With that said, Clemson has the kind of schedule the rest of the way that can be VERY kind to them if they take advantage of it. If our guys will focus on taking one game at a time, they would be doing themselves a huge service through the rest of the season.