We've now examined the entire ACC in terms of recruiting over the past five cycles. We also need to look at a few of our SEC foes to better compare ourselves to those we recruit against. The teams chosen for this examination include Alabama, Auburn, Georgia, LSU, and South Carolina. Also because there has been I believe that Clemson and FSU were the two best recruiters in the ACC over the past half-decade, I went ahead and placed Florida State in this comparison as well.

The following Figures and Tables associated with those figures (scroll to the article's end) illustrate the recruiting star per player ranking for each team as well as the players signed data. 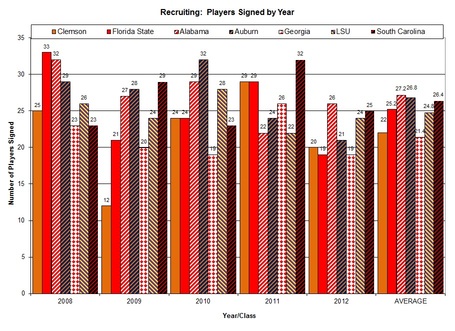 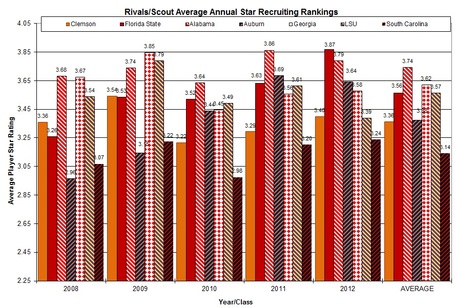 In terms of average class size over the past five recruiting cycles, Clemson (22 players per class) led only UGa (21.4 ppc). FSU, Alabama, Auburn, and South Carolina each averaged over 25 players signed per class. The non-Clemson included average class size for this sample group was 25.08 players. As we have repeatedly discussed, class size is reflective of coaching strategy. A hard core coach like Nick Saban finds ways to shed the underperformers so Bama can annually bring in a larger class each cycle.

The overall non-Clemson star rating per player for this sample was 3.50 stars. This is 0.14 stars per player above Clemson. Over this time period, Clemson had a better average per star rating than only South Carolina though was comparable to Auburn. Alabama (at nearly 3.75 stars per player) was the class of the field and has two MNCs to show for it. Georgia and LSU (approx. 3.60 stars per player per team) recruited nicely since 2008 as well.

Overall, each of these teams did relatively well on the recruiting trail. While Clemson was in the bottom half of this group when all is taken into account, their numbers were very respectable and need to be taken for what they are...a comparison to some of the better recruiters in the Southeast.