We compared Clemson's 2012 recruiting class to others in the ACC Atlantic and ACC Coastal previously. We also need to look at a few of our SEC foes to better compare ourselves to those we recruit against. The teams chosen for this examination include Alabama, Auburn, Georgia, LSU, and South Carolina. Also because there has been I believe that Clemson and FSU were the two best recruiters in the ACC over the past half-decade, I went ahead and placed Florida State in this comparison as well. 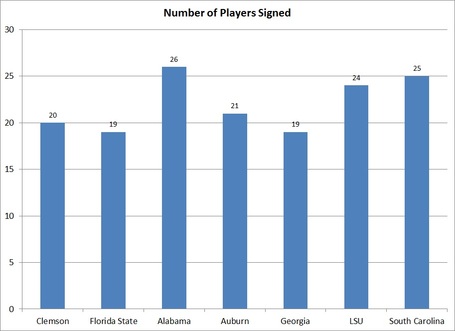 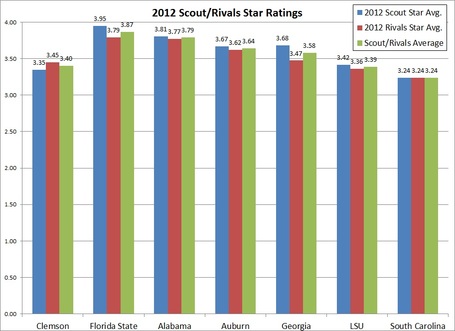 Clemson was on the low end of the number recruited at 20. The average of the other teams was 22.33 players per class, with Clemson taking more players than only Florida State and Georgia (19 each). Alabama led this group with 26 signees followed by SCar at 25 and LSU with 24. Again, these numbers are relative to coaching strategies. Overall, Clemson (average 3.40 stars per player) finished just above South Carolina (average 3.24 stars per player) and LSU (3.39 stars per player) in terms of Rivals/Scout average for stars per player. The Scout/Rivals non-Clemson average is 3.58 stars per player (coincidentally UGa's average). Florida State led the group in the "quality" ratings with the defending National Champions being the highest of the five SEC teams in this grouping.

Overall Clemson held its own with this group of teams. The Tigers' class was a little better than USC's but not quite as good as Georgia's or Auburn's. FSU and Bama clearly outrecruited the other teams. While Clemson may have been below average with this sampling, these teams have performed well on the recruiting trail. Consequently, you cannot be disappointed with the numbers shown above.