Postgame Impressions of the 2012 Orange & White

Share All sharing options for: Postgame Impressions of the 2012 Orange & White 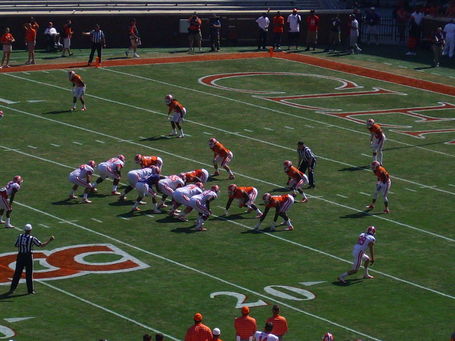 Every year we try to really caution people who watch the spring game to take very little in the way of conclusive statements about players from it. You can base almost nothing off how your team faces your own team in a scrimmage situation. The best thing to do is look for specific players and try to notice their fundamental improvement rather than any plays they make. If you sit in the stands and want to strangle someone like I usually do, this becomes more apparent (though listening to Fred Cunningham and Munson for the replay was just as bad). For far too long we’ve seen guys make spectacular grabs or long runs in a Spring game only to have them completely disappear in September. I can only give my impressions of the game after watching it live and rewatching the tape again tonight. Dissecting the game film is not something we do for spring.

The first thing that caught my attention was Tajh’s play. It was not where I expected it to be. As vanilla as our coverages were, he should’ve been able to pick them apart better. The offense seemed to have no flow when he was in the game. It had more rhythm for Stoudt. The first INT was on Peake and was thrown into a tight window. A checkdown was there. The catch should’ve been made, however. The second was boneheaded and all on Tajh for again forcing balls when there were guys underneath that could’ve advanced the sticks, and poor mechanics. It looked like he sidearmed that ball. If he would get his head focused on 1st downs instead of TDs, we’d be much better off here. Like last spring, he does not take what the defense gives him. Let the talented WRs handle that.

I had hoped to see him throw a few more bubbles to gauge whether his short throws to the flats had improved, but didn’t see enough to convince me either way.

The second was, of course, the OL.

Run blocking was not good. Some of the Guards were clearly lost. Spencer Region is too fat and too slow. He looks like he needs to lose another 30lbs. David Beasley is too fat and too slow. They might’ve been able to move someone on a run fit, but they’d lose leverage and the DT would get right by. That shows they need more foot quickness and better angles. Joe Gore and Isaiah Battle did get lost at times, and Battle especially could not handle Vic Beasley, but that only means they are not ready for primetime. I'm still struggling to figure out why Freeman would be a Remington candidate but with the Even fronts the defense showed he rarely matched up 1 on 1.

RBs, with the lack of holes up front, were tough slugging it all day. I did see a few nice blocks by McDowell and Howard, and Bellamy needs muscle. He also needs to learn how to hold onto the football. On his fumble that ball was not high and tight. Once he started juking, his elbows come off his body and the defender just reached in and stripped it.

On the defensive side of the ball, I thought we did some things very well. It was obviously very simple and vanilla. The coverage packages were mostly Cover 3, with a smattering of C2 and some C1. Cover 1 and 3 go together remember. It looked mostly like ¼ ¼ ½ with quarters to the twins/trips side. The OLB was generally walked out when using a 4-3 package, but there was a good split between 4-3 and 4-2-5. In the 4-2 situation we spread the LBs way apart. When the offense went with a tighter formation, it was mostly Undershifted front. For what appeared to be 90% of the time, the front was a G front (2i to weak/boundary, 3 to strength/Fieldside), and the Guards were being directly matched on a DT all day. There was no Nose Tackle on defense for most of the game. It even looked like we flexed the DT on a few snaps, but I’m not sure if that was by call or that he was moved back because of inexperience. 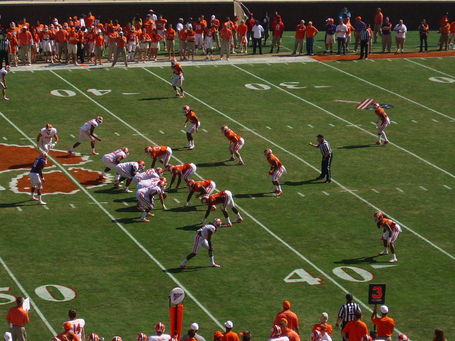 (3 set to the nearside/boundary, looks like an Over front with Christian walked)

Tackling was OK inside, but angles need some work in the alley and by the secondary.

Our safety play was fair, and Jonathan Meeks discovered that he does in fact have arms and HANDS in the last couple months, so hopefully he’ll be improved this year. His reactions in coverage looked a little better. I thought the corners did alright except for Cortez Davis, who was royally abused by Nuk. Travis Blanks looked like a talented player and was around the ball a good bit.

Aside from Bradley Pinion, the interior DL probably impressed me the most, but again that is a reflection of Guard play. Grady Jarrett’s motor ran all the time in HS, that’s why we liked him despite his poorer Rivals rating. He showed it again in the spring game, mauling the man across from him quite often. DeShawn Williams looked good. Tavaris Barnes was not in the game due to a funeral.

Vic Beasley showed the speed rush I hoped he would develop. He's too underweight to be an every-down DE, but he could be a 3rd down rusher with Crawford opposite. I could see him in the mold of Kiki Mingo (LSU). Malliciah Goodman was still looking slow. I'll be shocked if he reaches his 10 sack goal this season if he can't pistol whip Gore and Timothy at this point.

I could probably point out 20 guys who badly need the new Training Table to be online right now. The bottom line is, if this team is going to generate depth at the backup positions and OL, several guys are going to have to get bulked up or cut fat between now and August.