I was not able to attend Clemson's Spring Game yesterday for various reasons, but was not too concerned as ESPN pimped that ESPN3 would have full coverage of the game. No problem, right? Well, it didn't exactly work as planned, as my view of the Spring Game was the following: 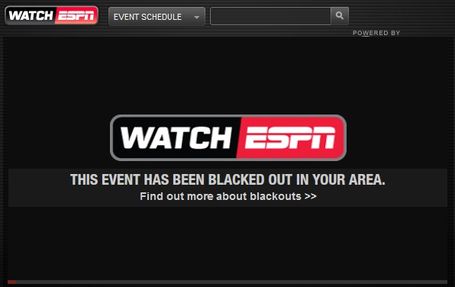 I am not sure what drove the blackout. Potentially it is related to CSS's 7 pm delayed broadcast, but I don't know that for sure. What I do know is DirecTV does not offer CSS and it screwed quite a bit of the Clemson Nation. That being said, one would assume ESPN3 will lift this blackout sometime this week so those who couldn't make it to the game may be able to view it at some point.

Onto the game. As I previously stated, I didn't see a lick of it. I got some updates from Dr. B and have second-hand information from around the net, so my takes revolve around this information (take that for what it's worth). The first item is one that we were concerned about and will remain concerned about: the offensive line. Apparently they looked like complete crap yesterday. The guards were eaten up and my level of concern keeps rising.

Other portions of the offense include decent numbers out of Tajh Boyd sans the interceptions. Nuk continued his excellent spring with 120 yards and a touchdown. Bryant had a nice day, as did Sammy, and Peake had five grabs for 75 yards. If we can get any production up front the Clemson WR position is loaded and could crush more than one opponent this season.

Jarrett was a beast up front, showing that the work ethic and drive that was present in his recruiting film. Clemson's defensive front scored seven sacks (Orange Team) and four sacks (White Team) total. Don't get too excited, though, as I am more concerned that our offensive line sucks. The defensive line may be better than I originally thought, though I will not be fully convinced of such until we see this group in the fall.

Travis Blanks had a productive afternoon per the stat sheet. He was easily the best newcomer to camp and contributed to with seven tackles. Clemson returns all but Sensabaugh this season and if Hall can successfully come back from last season's injury/offseason surgery, one must assume that the DBs will be a competent group based on talent and returning experience. After looking at the stat sheet, I am still concerned about what seems to be a large number of tackles. The majority of Clemson's snaps likely was out of nickel, so that may explain more about the statistical breakout.

It is tough for me to form an opinion on the linebacker play without thoroughly watching the film. I heard that fundamental play improved, saw that Parker contributed significantly, and have heard that Townsend was progressing all Spring. Still, this is a sticking point for everyone. We have the talent to have a great group here but the results will depend on their ability to master fundamentals and play more instinctively.

I was initially surprised to see Coach Dabo require this practice to go into double overtime. As the game was in a blackout, the original thoughts I had revolved around most coaches general disdain for Spring Games and their desire to get their team off the field as quickly as possible to avoid injury. Thankfully, the squads didn't go at it in two real overtime periods as I originally feared. The game was decided via a kicking contest (fair enough). I was a little surprised there as well. I would have expected the Sweatshirt and Coach Munson to put together something a little more exciting for the fans like, say, a dance-off or a hotdog eating contest. In all seriousness, I'll applaud Dabo for the decision to kick field goals to break the tie instead of the full contact overtime period I originally thought took place.

Baseball has a chance to take the series against Top 20 NC State this afternoon. If you cannot make it to Beautiful Tiger Field this afternoon, ESPN3 will be streaming the 1 PM first pitch (assuming there is no blackout!). We really need to maintain momentum built from last weekend's sweep through a series win today.

Another reminder is the golf down at Harbour Town this afternoon. Kyle Stanley and Lucas Glover made the cut and will be finishing up this afternoon. Many other local golfers are participating in this event. The big item I took from the scoreboard was John Daly sitting at -1. I will be rooting for some improbable JD run dropping a 61 on the field to put him squarely in contention as he enters the clubhouse. Freaking JD.