We recently looked at the 2012 recruiting cycle for the ACC Coastal. We do realize that one recruiting class does not make a program. Accordingly, we want to put this class in perspective by looking at ACC Coastal schools' results over the past five cycles and compare them to Clemson. Five cycles were chosen because these are the only cycles that directly factor into the 2012 teams because players signed in 2008 and redshirted will be seniors this year (and all future classes have eligibility as well). Here is our analysis and comparison between Clemson and the ACC Atlantic over the past five cycles.

The following Figures and Tables associated with those figures (scroll to the article's end) illustrate the recruiting star per player ranking for each team as well as the players signed data. 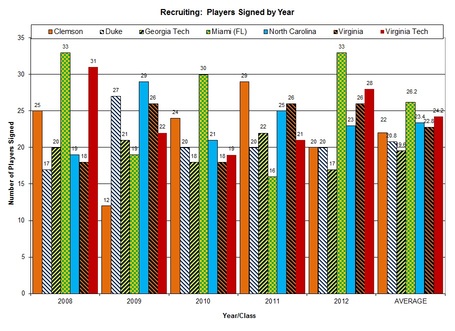 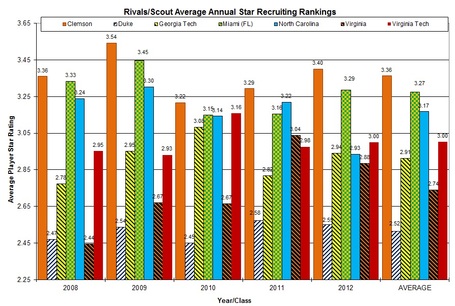 The first item I am sure you noticed was Clemson's dominance in the stars per player category. The Tigers had the highest star per player average for each season and was 0.09 stars per player better than 2nd best Miami. North Carolina and Virginia Tech were the only other schools who boasted a star average above 3 for the five year period. The Coastal Conference average star ratings over this time period were the following: Rivals 2.98, Scout 2.89, Average of the Two: 2.94.

Clemson, at 22 players per class, trailed all schools sans Duke and Georgia Tech in this category over the past five years. Miami averaged over 26 signees per class and Va Tech 24. As we've said before, you have to know the history and situations the schools faced to understand how these numbers played out. Clearly Clemson's 12 member 2009 class dropped their average for this category.

Overall, Clemson seems to have recruited better than their Coastal opponents over the past five cycles. These numbers indicate that while other classes were larger, the quality of the players CU pulled was better than the opposition and the classes large enough to suspect quantity of talent is not an issue. So far, Clemson and Florida State are the two best recruiting schools per data acquired and used in this series.