We compared Clemson's 2012 recruiting class to others in the ACC Atlantic previously. Now we'll make the same comparison with our Coastal foes and gauge how our Tigers' entering talent matches up with others on the conferences' other side. 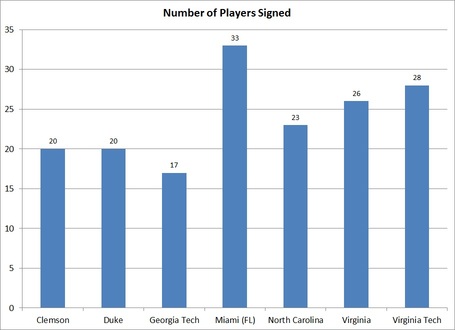 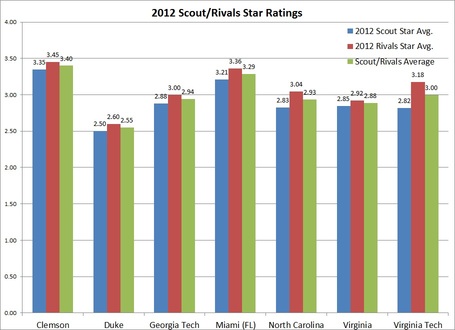 In the stars per player category, Clemson was the class of the field trailed closely by Miami. Clemson and Miami were the lone schools to grade out above 3 stars per player by both ranking services. Virginia Tech had a Scout/Rivals combined rating of 3.0 stars and Ga Tech, UNC, and VT each averaged better than three stars per player via the Rivals rating system. Clemson brought in 20 players in this class. This was tied with Duke for second lowest and ahead of only GT (17 signees). Miami signed half the state (33 players this period) while VT loaded up with 28 signatures. The Coastal Division average was 24.5 players per class.

While Clemson lagged others in the Coastal in numbers signed, the recruited talent should more than make up for lower numbers. As we've discussed before, class size is largely dependent on many things so more signees could be attained for various reasons and most coaches choose to bring in fewer than allowed (25) because that's just how the numbers work out with an 85 scholarship count.