We, like everyone else, lauded the efforts made by Chad Morris and the Clemson offensive staff over the course of the 2011 season. Now we want to further examine outcomes of the Tigers' drives throughout the season, show how Clemson performed in redzone situations, and better understand durations within each drive.. We'll begin with unfiltered overall stats for the season. These items do not account for individual game conditions nor opponent-each of which impacted gameplay. All data shown below was originally attained from www.clemsontigers.com.

Here is a drive overview taking into account all drives from the opening against Troy to the conclusion of the Orange Bowl.

Here is the distribution of results: 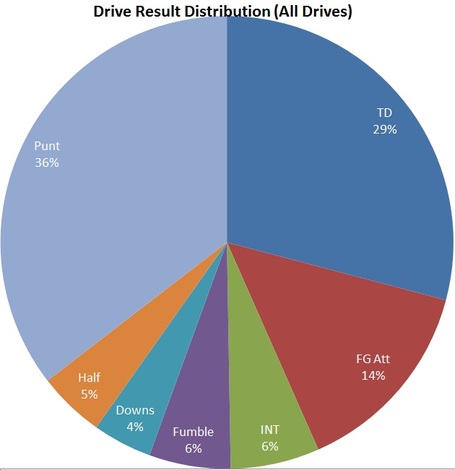 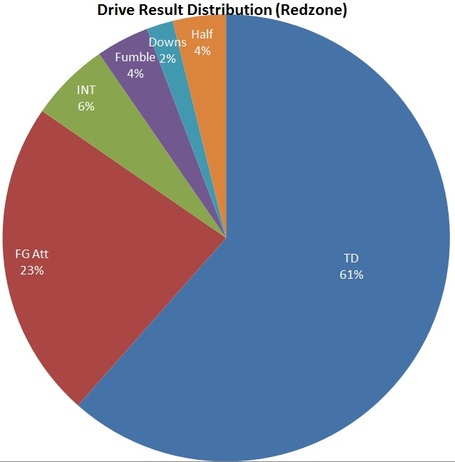 What you probably noticed was that Clemson either put the ball in the endzone or attempted a field goal on over 43% of the drives on the season, either turned the ball over or failed to convert on a 4th down attempt 16.4% of drives, and had a drive end on a punt 35.4% of the time. Clemson was able to score a TD or kick a field goal on nearly 85% of drives that culminated in the redzone. Approximately 11.5% of these drives ended via turnover or on downs.

Intuitively in most "conventional" offenses, one would expect a distinct correlation between distance to goal and time of possession-particularly on scoring drives.

Here is how all drives played out when distance to goal was compared with time of possession. 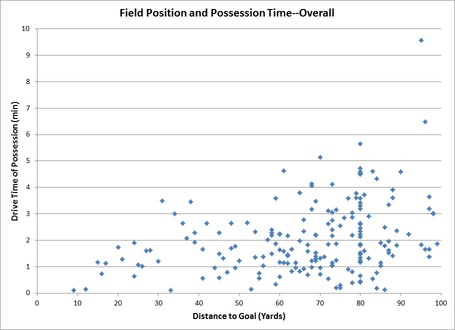 Here is how the same metrics looked for drives ending in a touchdown or field goal attempt: 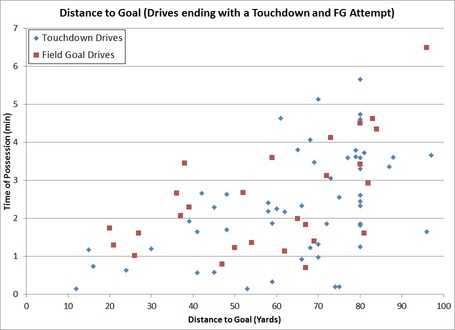 As you can see comparing the two charts above, three of the four Clemson drives that lasted longer than five minutes resulted in either a touchdown or field goal attempt. Ironically, the longest Tiger drive of the season was a 9:34 drive that ended the football game against Auburn. Clemson averaged 2.05 minutes per drive on the season.

The table below shows time of possession and average plays per drive for various drive results.

These numbers, if taken in context, appear to make some sense and illustrate how fast this offense either scores or gives the ball back to the opposition.

See below for the overall number of drives per time of possession.

The distribution can be seen in the chart below. 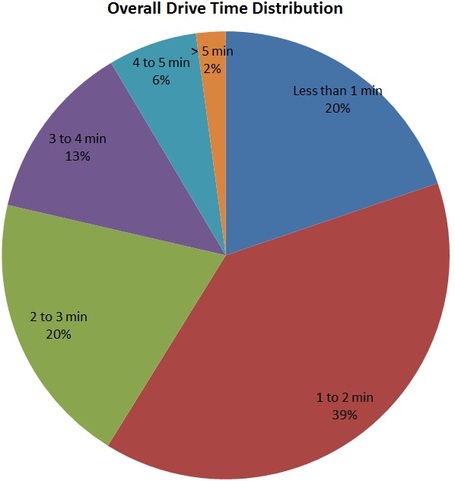 On the year, Clemson averaged around 5.72 plays per drive. As expected, drives ending in a score or scoring attempt featured more plays than others. Overall, the play distribution per drive played out as follows.

On a percentage basis, the distribution pie broke down as shown below. Clearly, drives of three or fewer plays were likely the result of a quick touchdown or a turnover, four plays a “three and out,” and more plays show a sustained drive. 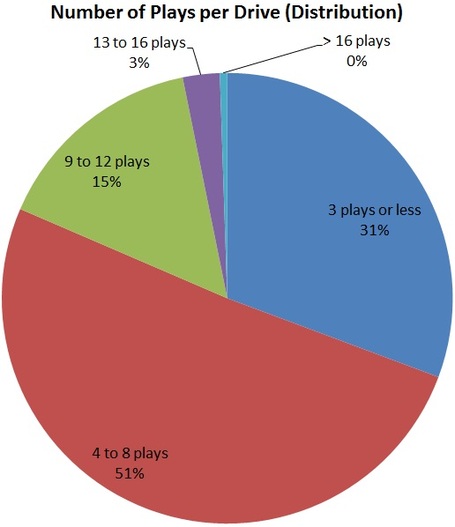 My overall thoughts on these data are not what I would consider earthshattering. We knew that Chad Morris’ goal was to extend games through his HUNH offense and, thus, wanted to score (or give the ball back to the opponent) relatively quickly. Hence, Clemson had just four drives that lasted more than five minutes and 82% of Clemson’s drives consisted of eight plays or less. Clemson either scored or attempted a field goal 43% of the time. I’d say any offense that scores/has a reasonable chance to score 4 out of every 10 times it touches the ball will put up quite a few points. Clemson was able to punch in over 60% of its redzone possessions for touchdowns though CU did not score/attempt a field goal in 16% of these chances (note that both drives in the redzone that ended with the half of play were contained in the Auburn contest).

This is the style of play that we expect to see out of Clemson moving forward. Thus, the days of long, sustained drives by the men in orange appear to be a thing of the past as our Tigers will live or die very quickly after starting each driv