We compared Clemson's AD budget to other ACC foes earlier and feel that we need to discuss how our athletics department compares to those in the SEC. I'll warn you, the information that you are about to divulge is fairly staggering. The schools we compare both make a lot of money and spend a lot of money too. Again, if you are interested in the nuts and bolts behind the CU/IPTAY budgets, we discussed them earlier and they can be found here and direct information used below is shown in the first link.

A year ago we compared Clemson to SEC schools over a lengthy time period as shown here. As discussed in the ACC comparison, information for the previous SEC article was attained from www.usatoday.com. USA Today has not appeared to update data since our article last season so all information seen below was attained from http://ope.ed.gov. If USA Today does update their database, I will try to look at their data and compare it to the data shown below and identify differences to create continuity and give a year over year apples to apples comparison. The bottom line numbers shown below, though, are consistent with those from the USA Today data though the presented granularity is different and, in some instances, not as fine.

Further, the data shown below are provided by the Office of Postsecondary Education of the U.S. Department of Education and collected through a database that "consists of athletics data that are submitted annually as required by the Equity in Athletics Disclosure Act (EADA)" (per their website).

These budgetary numbers are comprised of operational expenses such as salaries, student aid, operational expenses, and recruiting costs. Revenues were fairly vague and include miscellaneous items. We suspect there are programs out there who boast their reported earnings by claiming various donations and such. Again, our article earlier this month featuring the CUAD/IPTAY numbers do give more specifics on CU's numbers.

We quickly point out here, like in previous posts, that these numbers do not directly indicate failure or success. You cannot simply throw money at an item to achieve results. Success comes from successful planning and implementation though having more resources should enable a program to more easily attain success.

Below is the mean and median data for all SEC schools' overall budget and how it compares to Clemson's.

You don't have to be a math-wiz to understand that CU is far, far behind the SEC schools' numbers in each of these categories as reported by the institutions. Below is how Clemson compared to the individual schools through overall budgetary metrics. 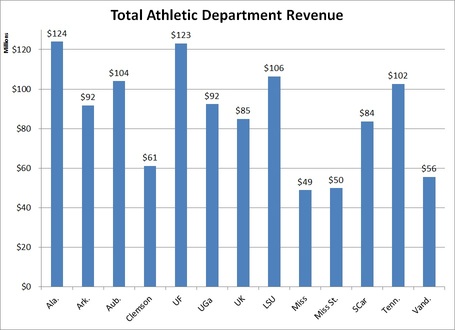 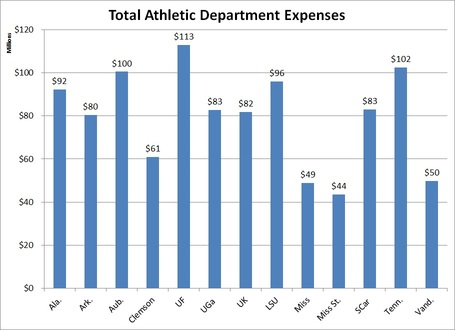 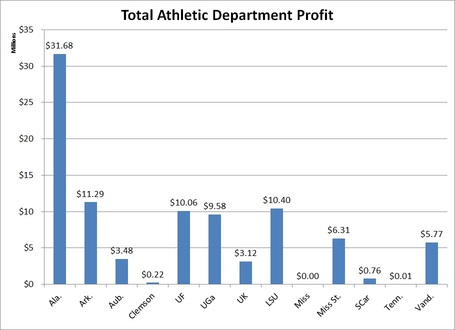 As you probably picked up, Clemson was dwarfed by all schools sans the two from Mississippi and Vanderbilt in overall revenue and expenses. Clemson, Ole Miss, South Carolina, and Tennessee were the only schools in this survey whose AD profit did not exceed $1 million on the year. Alabama's reporting showed their AD a staggering $31+ million in the black while the other schools profited between $3 and $12 million during the sample time frame.

We next venture into the football arena where, again, Clemson was outgained, outspent, and brought in less profit than most of the Southeastern conference.

Again, the individual results are shown below. 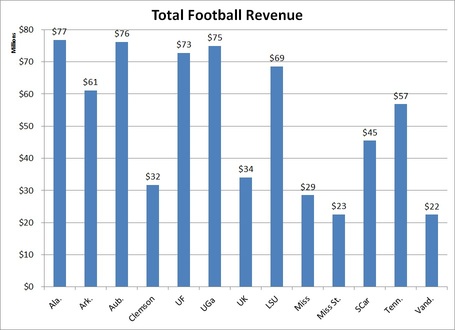 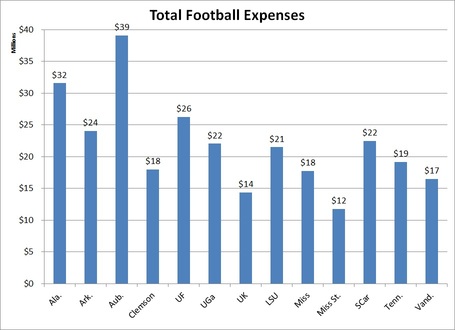 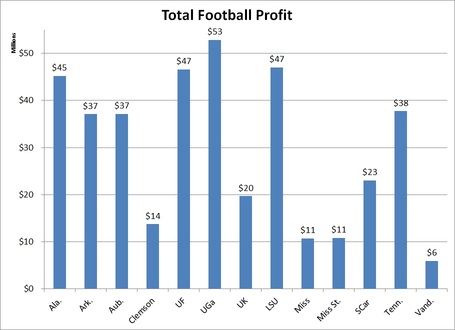 It is really hard for me to wrap my head around some of this data, as the numbers are just ridiculous. All teams sans Vanderbilt profited more than $10 million in '10-'11. Five schools netted over $37 million during this time period, with Georgia crushing the field with nearly $53 million in profit based on their reported data. Clemson's $13 million in profit is no chump change but is clearly behind the majority of reported numbers.

Men's basketball is the final subset of our evaluation. Below you see the same metrics shown above.

While these numbers put Clemson closer to the other universities, our Tigers are still $2+ million behind in revenue and expenses compared to the median/mean though are roughly equal in basketball profits. 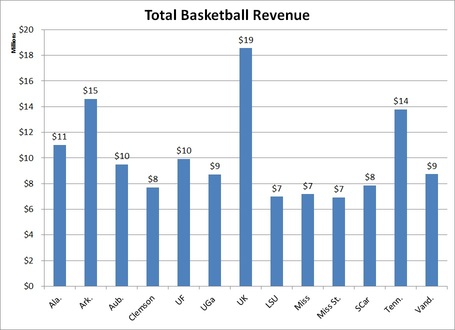 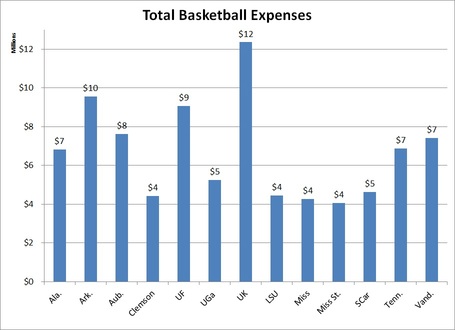 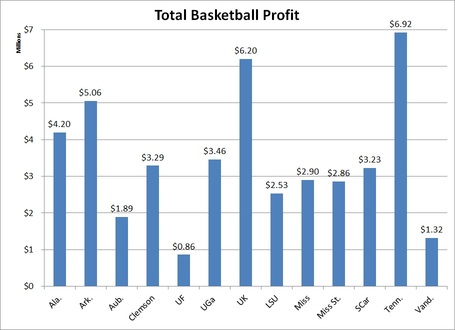 Overall, we think some of these numbers are skewed by reporting practices at universities. Still, these schools make a lot of money and spend a lot of money too, particularly when compared to Clemson. It is pretty obvious that Clemson University and the ACC in general have a ways to go to catch our out of conference foes in terms of cash flow.