Again, we will showcase how Clemson's Athletics Department's revenues, expenses, and profits compare to others around the conference. We looked at the CUAD/IPTAY budget earlier this month. Last year we compared the ACC member universities' operational budgets from '04-'05 to '09-'10, so use this link as a reference moving forward. I'll point out that the information for that article was attained from www.usatoday.com. USA Today has not appeared to update data since our article last season so all information seen below was attained from http://ope.ed.gov. If USA Today does update their database, I will try to look at their data and compare it to the data shown below and identify differences to create continuity and give a year over year apples to apples comparison. The bottom line numbers shown below, though, are consistent with those from the USA Today data though the presented granularity is different and, in some instances, not as fine.

Further, the data shown below are provided by the Office of Postsecondary Education of the U.S. Department of Education and collected through a database that "consists of athletics data that are submitted annually as required by the Equity in Athletics Disclosure Act (EADA)" (per their website).

These budgetary numbers are comprised of operational expenses such as salaries, student aid, operational expenses, and recruiting costs. Revenues were fairly vague and include miscellaneous items. We suspect there are programs out there who boast their reported earnings by claiming various donations and such. Again, our article earlier this month featuring the CUAD/IPTAY numbers do give more specifics on CU's numbers.

We quickly point out here, like in previous posts, that these numbers do not directly indicate failure or success. You cannot simply throw money at an item to achieve results. Success comes from successful planning and implementation though having more resources should enable a program to more easily attain success.

We'll begin with Clemson's numbers. Here is a general breakdown that focuses on football, basketball, then other sports while illustrating how men's teams compare to the women's

Other granular information such as coaching coasts, recruiting, student aid, etc...can be found below.

So how does this compare to the rest of the ACC? Below is revenue/expense data shown graphically then distilled into one chart. 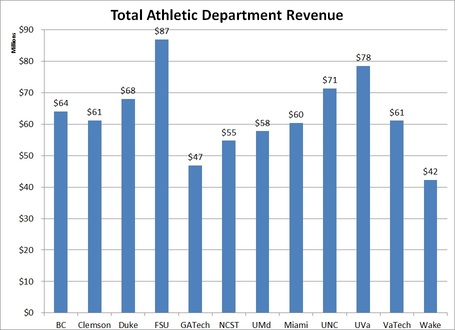 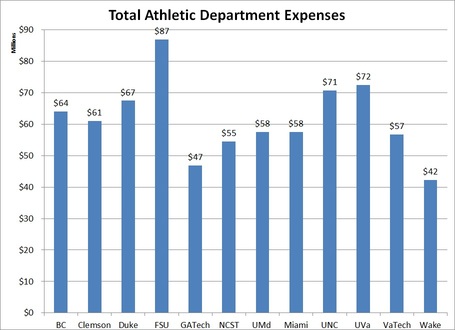 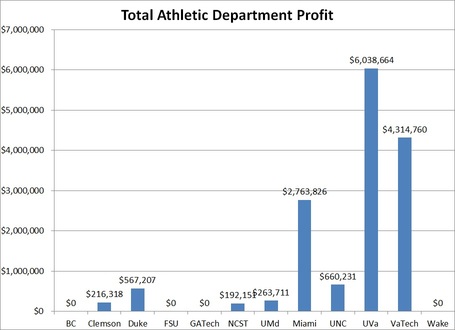 FSU, Virginia, UNC, and Duke each had significantly more ($5 million) in revenue and expenses than Clemson. CU was on par with BC, Miami, Maryland, and Virginia Tech. Georgia Tech, Wake, and NC State brought in and spent considerably less than Clemson. In terms of profit, UVa, Va Tech, and Miami were rolling in the cheddar after all was said and done. They brought in $6 mil, $4.3 mil and $2.7 mil respectively. Clemson and the other schools were comparable in this item. I will point out there were four schools who were able to perfectly balance their budgets--an accounting masterpiece.

As described in the table below, Clemson is right around the mean and mode statistically when you look at the revenue and expense figures and close to the median in overall profit. Statistically, there were a couple of schools who were significantly more profitable than the majority of the other conference foes.

Overall, our Tigers appear to be overall in the middle as an AD in athletics spending compared to our ACC brethren. 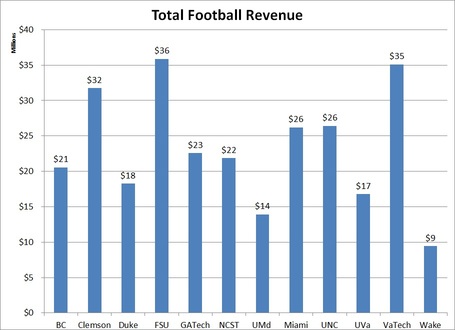 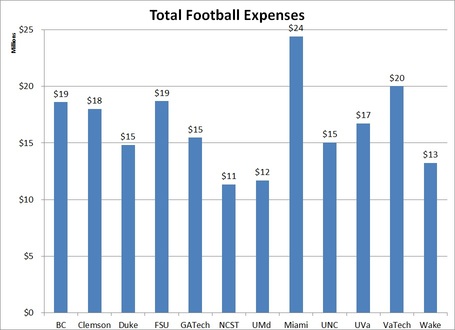 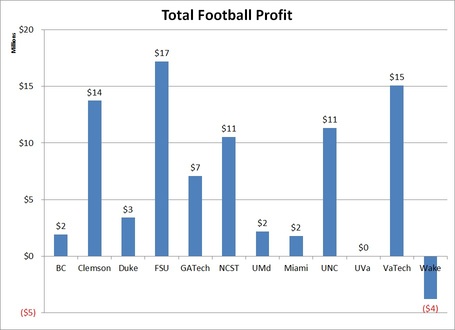 In terms of football, Clemson is well ahead of most of the conference in revenue and profit. Clemson trailed only FSU and Virginia Tech in revenue were able to keep their expenses as the 8th highest in conference. This combination makes CU's football program a clear cash cow, raking in $13.7 million for the school's AD in '10-'11. Again, only Va Tech and Florida State eclipsed Clemson's football profit during this period. UNC and NCST were the two other schools that profited by over $10 million and Wake was the lone school to run a football deficit over this time frame.

Basketball also produced resources for the entire program, though Clemson (as expected) was not as prosperous here compared to other ACC teams as in football.

Clemson was under the average and median in all three categories. It was no surprise that traditional ACC powers Duke and North Carolina put up the largest numbers in both revenue and profits. Duke reported nearly $29 million in basketball revenue-a number that is nearly mind blowing. These two schools each brought in $13-$15 million each in profits. The next highest figure was $6.5 million by the NC State Wolfpack. Interestingly, Florida State and Boston College each broke even on basketball and both had lower revenues yet spent more than Clemson.

These numbers were not much of a surprise to me. Clemson brings in a lot of football money and is middle of the road in the ACC when you look at the overall cash flow.