A couple months ago Clemson played in the Orange Bowl against West Virginia. We did not take the time to evaluate how this squad’s recruited talent compared to our Clemson Tigers at game time and have been requested to supply this info. Before we get into the analysis, I’ll point out that I have taken the depth charts for both teams DIRECTLY from the Clemson website (www.clemsontigers.com) within the "2012 Orange Bowl Guide" that was placed on the site back in January. I will go ahead and tell you that because of injuries and Monday depth chart adjustments, some items here may end up a little out of place come game time so, in an effort to maintain consistency, I’ll use both teams’ depth charts as presented on the official Clemson Athletics website.

We all know what happened in the game, so I won't rant and rave again here but do encourage you to share your thoughts. 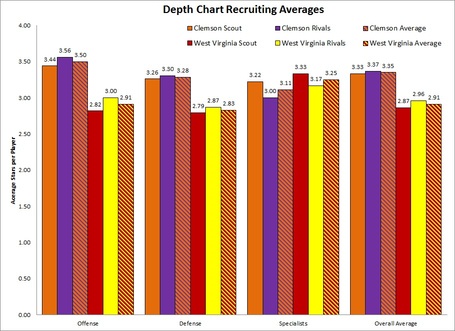