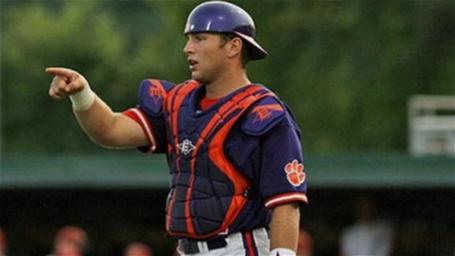 I hate our bullpen. Every single pitcher in our bullpen (with the exception of Jonathan Meyer, of all people, who only gave up one hit in the series) is going to have to earn their way out of my loathing. Coming into this series, it was assumed that North Carolina was the better team, so losing this series does not bother me. Getting swept wouldn't have bothered me. Getting swept THE WAY WE DID gets me steaming. You are a reliever. You have ONE job to do. Throw strikes. Throw strikes and good things happen. If North Carolina is really the better team, they will get the hits that they need in tough spots. Instead of accepting this and challenging their hitters to beat us, our relievers (beginning on Saturday) nibbled at the corners or didn't come close at all, and gave North Carolina the games. Suck it up and come at the North Carolina hitters with your best stuff. If they knock doubles off the wall and rip base hits down the line, then we'll know that they deserve to be ranked #6 in the country, and we can just accept that they're better and move on. We didn't do that; we folded up like a bunch of lawn chairs, and I've almost never seen the momentum and life just sucked out of DK Stadium like it was on Saturday and Sunday.

This isn't the South Carolina series, so I've taken off my "I don't care that they're better than us, win anyway" shades and I came into this series with reasonable expectations. I thought that we could definitely beat UNC, but with them being the "better" team, I assumed we would lose the series; I looked for one win in the series, with ambitious expectations being two wins. If we lost games in this series by scores of 11-6, 10-5, etc., I would chalk that up to them being better and say "we did what we could, let's get ready to sweep BC.", but to lose like this just makes me sick to my stomach. It shows you that if Clemson could find just a shred of consistency with their pitching staff, we've got the talent to be a top 10 or top 15 team (assuming North Carolina is a top 10 team) when it's all said and done. Instead, we're looking at getting swept in a series that we gave away to a team that, at least talent-wise, is not any better than we are.

I stand by that statement. North Carolina is a good team, there's no question. But top to bottom, talent-wise, we are just as good, and we handed them two games this weekend. It is absolutely unacceptable, especially on our home field.

Game summaries after the jump....

This was a hard fought game on both sides, and a real treat to watch as a baseball fan. North Carolina jumped ahead in the first inning on two hits and a sacrifice fly, and were also aided by a wild pitch. UNC starter Kent Emanuel (who improved to 4-0 with the win) was perfect through the first three innings before Thomas Brittle cracked a single through the right side to lead off the 4th. Clemson would load the bases that inning with 1 out, a situation where a run MUST be scored, and usually reliable Spencer Kieboom struck out looking, the absolute LAST thing you can do in that situation aside from hitting into a double play. Joe Costigan would line out to second base to end the threat in that inning. It's not fair to say that this situation cost Clemson the game, but in tough games like these where the defense and pitching are performing fairly well, these are the times when a team has to execute, and Clemson simply did not.

Clemson would dent the scoreboard in the 5th, when Jason Stolz led off with a double and Garrett Boulware followed with a single to drive him in. North Carolina responded with 3 runs in their half of the inning, with the help of 4 hits and a hit batter. Kevin Brady (0-1) got the leadoff hitter to ground out, then hit Parks Jordan with a pitch. After Jordan was hit, it seemed like everything just went to hell for Brady. The next four batters went as such: single, single, double, single. Brady just could not miss a bat and was finally relieved by Matt Campbell, who induced a double play on his first pitch to get out of the inning. However, the damage had already been done by this point, and the Tar Heels were up by a 4-1 margin.

Clemson came up with 2 runs of their own in the 6th. Steve Wilkerson reached on a fielding error by Mike Zolk, and Shaffer drove him in with a triple down the right field line. Phil Pohl struck out and then Kieboom hit a ground ball to the first baseman to score Shaffer.

Both teams would stay quiet the rest of the way, with Matt Campbell and Scott Firth holding the Tar Heels to one hit in the final 3.2 innings. This is the only credit I will give our bullpen in this article and for an indefinite period of time, because right now, they suck. In this first game however, they kept Clemson in the game and gave them almost 4 innings to try and get the one run they needed to tie the game. Clemson would get a runner in scoring position in each of the final three innings, including loading the bases in the 9th, but they simply could not get the base hit they needed to push that tying run across. Clemson had Shaffer hitting in the 9th inning with runners on 1st and 2nd and 2 outs, and in that situation North Carolina chose to pitch around Shaffer and ultimately walked him. This had Clemson leaning on Phil Pohl, who would go hitless in the series, trying to drive in the tying run. Pohl would strike out swinging, leaving three Tigers stranded and Clemson down 0-1 in the weekend set.

It's games like these where you really just get left shaking your head. Clemson did everything they could to give this game away, with what seemed like every infielder we had making an error (each of our starting infielders, McGibbon, Wilkerson, Stolz, and Shaffer each had an error), and it was still tied at 3 going into the top of the 9th inning. This is where everything fell apart for the Tigers. Daniel Gossett, who has had the tendency to give up the big inning so far this year, came on to relieve Patrick Andrews. He gave up two singles and a walk (with the walk being issued to a hitter who was ATTEMPTING TO BUNT), and was pulled with the bases loaded and nobody out. As if that wasn't enough, Scott Firth came on and decided that I wasn't pissed off enough, and got pulled after throwing 9 pitches, the only strike being the "gimme" strike on a 3-0 count to his second hitter. After walking both hitters (and walking in two runs), we brought in David Haselden to finish off the inning. You know things are bad when we have to bring in our Wednesday starter as a reliever on Saturday, especially as inconsistent as Haselden has been. By the time the inning was over, we were down 6-3, and I was ready for a drink.

Despite all this negativity about our bullpen, I will give Jason Stolz credit for swinging a good bat in this game. He and Spencer Kieboom were both 3-for-4, setting the table for Dominic Attanasio's 2 RBI's.

This is the game where I lost all faith in our relievers. Kevin Pohle goes out and pitches his heart out again in his second start. The announcers on ESPN3 kept mentioning all these different pitchers (Jonathan Meyer, David Haselden, Matt Campbell, etc.) pushing for a starting spot in our weekend rotation. No. Just.....no. Brady, Leone, and Pohle are doing just fine, Pohle in particular, and he pitched a hell of a game today. North Carolina got their runs on a leadoff triple and a homer. Two runs in five innings for Pohle, and it stayed this way up through the top of the ninth. Clemson at that point had scored 5 runs, with 2 RBI's a piece at the bottom of the order from Jon McGibbon and Thomas Brittle, and one from Jason Stolz.

In the ninth inning, I could not believe what I watched unfold. The ESPN3 announcers, prophets that they are, said that, after blowing up in the 9th inning yesterday, to look out for the "here we go again" attitude, should Clemson find themselves in a tough spot this inning. Sure enough, we walk the first three batters of the inning, because we wouldn't want things to be TOO easy. This put the tying run at first base, and an RBI groundout and a base hit to left field tied the game and sucked all life clear out of the stadium.

It's at this point that I could complain about how Spencer Kieboom grounded into a double play in the bottom of the 10th with the bases loaded and one out. Yes, that is a huge situation and he needs to come through. He is to blame in that sense. However, this game should have been over in the 9th inning, and it seemed that after they gave up the lead, Clemson spent the rest of the game waiting to lose.

Jonathan Meyer came on with a runner on second and nobody out in the 11th and struck out the first two batters he faced before giving up an RBI single that would ultimately win the game for UNC. Again, this game should have been over in the 9th and Meyer came on in a tough spot; I commend him for doing what he could. Mike Zolk from UNC battled Meyer for 8 pitches before finally hitting the single that won the game.

The box score from Sunday's game was not available at the time of publishing, but will be posted here at some point today

I've already said all I can say about our relievers. They suck, they have to do better, end of story. I'm not going to dwell on it anymore than I already have.

While I am pissed about the relief pitching, which I believed cost us a shot at winning the series, the bats are a different story. There were a couple of situations that could have been executed better, but right now I'm liking this lineup. Jason Stolz has come alive lately and has worked his way into the #2 spot in the order, behind a solid hitting Steve Wilkerson and ahead of Richie Shaffer, who's a man on fire right now. Phil Pohl had to go hitless in this entire series to lower his average to .364, and he's got more RBI's than Richie. I'd like to see this lineup do what they can to keep the Tigers in the game while we figure out what the hell we're doing on the mound.

The Tigers continue their season this Wednesday in Cullowhee, NC against Western Carolina at 4 p.m.