Share All sharing options for: Venables/OU Defensive Comparison--Texas and Beyond

We need to look at other "like" teams when evaluating the OU defensive performance under Venables. We chose to dig into Texas' defensive stats then brush upon other teams with similarities to Oklahoma. The Longhorns were chosen as a comparable team due to their perceived superior defensive play over the timeframe of this analysis. This theory was supported through data attained from http://www.cfbstats.com pertaining to Big 12 conference total defense ratings since 2007. See below for a Texas/OU comparison in this area. I'll note that the overall total defense is determined by yards given up per game and is restricted to only conference contests. Also, we discussed Oklahoma under Venables (exclusively) as short time back; that article can be found here. 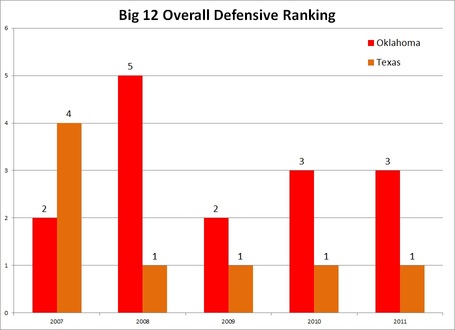 Here is how Texas fared defensively overt the past 11 seasons:

As you can see, the Longhorns struggled mightily against the pass from '06 to '09. Will Muschamp's arrival in Austin aided to fix this glaring issue as Texas improved against the pass in each of his three seasons as DC. Texas was 40th or worse in four of these eleven seasons but their scoring defense never fell below 50 throughout these analyzed seasons. Conference ranking in scoring fluttered to best in conference three of the seasons, second best in two, and third best In three. I will note that the '02 and '09 scoring defenses were third best in conference yet eighth and 12th overall nationally, respectively.

As shown below, OU was much more consistent with in-conference scoring rankings. Only twice was OU outside of the top two in scoring defense (sixth in '05 and third in '10). Texas was consistently in the top 5 but not as steady as their Big 12 counterpart. 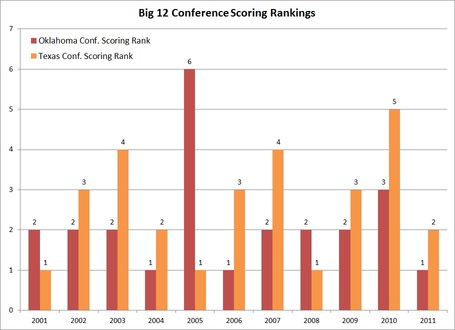 Specifically, the chart below shows how the two schools compare on a points per game basis. As expected per the previous graphic, OU has given up fewer points for the most part over the years. 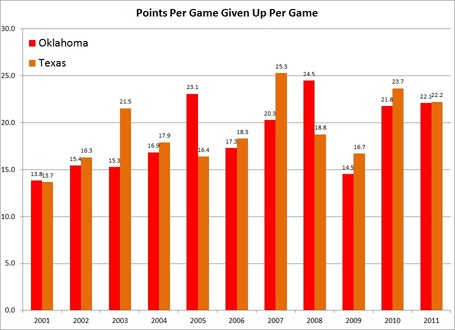 Let's dig deeper into the weeds and see how these two programs compared on a stat per game basis. Below are the raw statistics for Texas over this timeframe. You'll notice the peak for total yardage came just before Muschamp arrived and has been tamped down since. 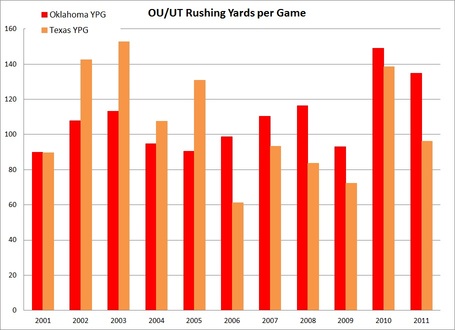 You'll notice a decided advantage for OU through the first five seasons of this survey. The following six seasons saw the tables turn and Texas lead this category. The Horns allowed fewer than 100 ypg in each of these seasons sans the '10 campaign. OU gave up over 100 ypg in 2/3 of these years with the final two being, by far, the worst overall for this program.

Pass defense saw the two defenses waffle back and forth throughout the decade. Both were good in this area early on but lost effectiveness (likely due to the breakout of shootout football in the Big 12). Neither was particularly good in '07 or '08 but both rebounded in '09. Texas had more success over the past two seasons, keeping the opposition under 210 ypg in each of these years. 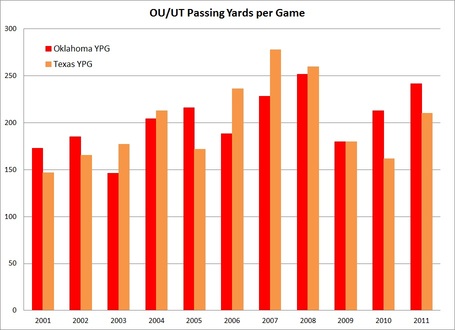 The total ypg chart is shown below. Texas improved greatly from the '07-'08 time period while OU was fantastic in '09 but struggled the past two seasons in overall yardage surrendered. 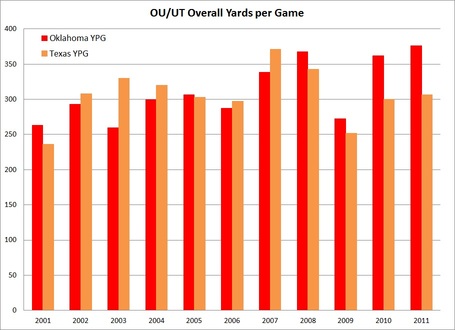 You're probably wondering how these two compare on a per play basis since OU ran a lot of plays the past couple seasons. Below you'll find that comparison and what you will see is OU better or roughly equal to UT through the first eight seasons of this analysis. The past three years, though, saw Texas buck this trend to be categorically better than their foes to the north by 0.25 ypp in '09, 0.47 in '10, and 0.55 ypp in '11-a clear upward trend in this delta to the advantage of Texas. 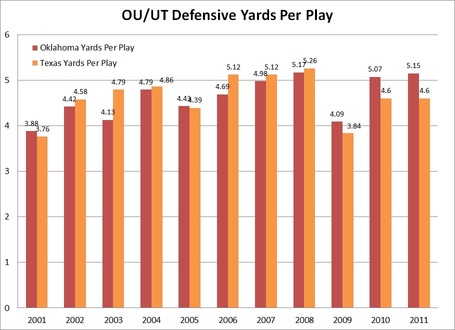 So what does this comparison tell us about Venables and his environment? Oklahoma's looks statistically better than Texas over the whole period, but both still had their hiccups during the middle of the decade. This indicates the offensive shift we saw with Big 12 offenses rising into high powered machines.

The first item below is the overall FEI rankings themselves. We selected several teams for the sake of comparison. The Big XII teams selected are obvious. Texas Tech ran the high-paced Leach system until Tubby arrived. Oregon runs their offense at breakneck pace as well, and we threw Clemson in as well. Tulsa's offense went from Malzahn to Hand to Morris, and is supposed to be high-paced. As shown, Oklahoma fared well in this category over the course of the analysis. The Sooners never fell below 20th overall in the defensive FEI rankings (dating back to the 2007 season). There was not another team in this time period within this analysis that could make this claim, though Texas improved from 2007 and Oklahoma State improved dramatically over this time period. I will also point to Oregon. The Ducks fared well defensively over this analysis, having three seasons with an FEI ranking inside the top 10 along with a ranking of 34 in '08 and 24 in '09. Oklahoma averaged a ranking of 11 followed by Oregon (15) and Texas (21.2). None of the other squads maintained a top-30 average. 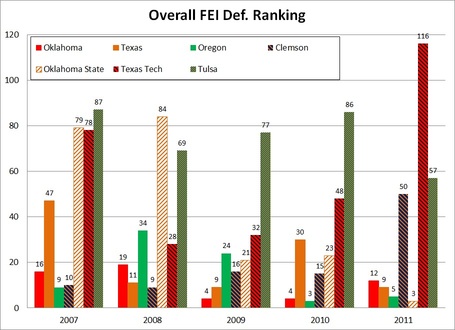 Next we needed to see how these rankings looked when you consider the number of plays each team's offense ran, as offensive strategy is an argument for defensive production slippage. Over the course of this analysis, Oklahoma ran more plays than anyone else outside of the '07 and '11 seasons (in '11 the Sooners ran approx. two plays less than leader Texas Tech). Again, because of the teams chosen (sans Clemson prior to '11), the offensive philosophy drives quick scores and an attempt to lengthen the game and, thus, run more plays. We'll look at time of possession next. 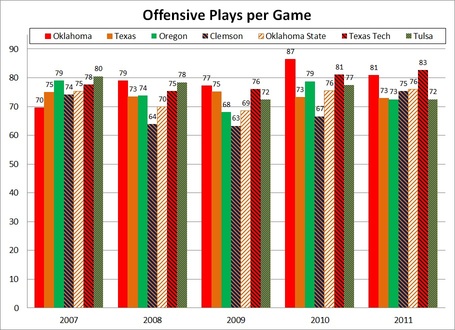 The time of possession comparison is slightly different than I expected. In three of the five seasons analyzed, Oklahoma averaged 30 or more minutes of possession time. We know they ran a lot of plays in each season (see above) and were well ranked as an overall unit, so the only reasonable explanation is that Venables' defenses were successful limiting the opposition and gave the ball back to the offense relatively quickly. Over the five sample years, the Sooners' offense averaged just over 29.75 minutes of possession per game (meaning the defense was, on average, on the field approx. 30.25 min per game). Oregon's offense was on the field the least (approx. 26.6 min/game) while Texas possessed the ball over 31.5 min/game. Tulsa averaged 29 min/game, OK State 29.3, and Texas Tech 28.8. 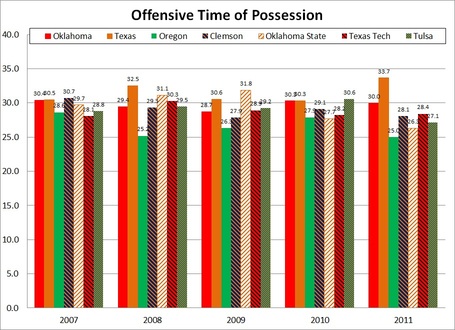 Overall, Oklahoma's defense statistically looks good when compared to its peers. We'll continue this analysis with one more statistical installment to compare Venables' time at Oklahoma to what we've seen at Clemson.