Share All sharing options for: End of February Sunday Thoughts

It has been a couple weeks since our last installment, but at this time of the year I have few outstanding items left to chat about outside of basketball closing out the regular season and baseball getting cranked up. Before we look into either of these, I need to discuss our plans here at STS. We obviously will discuss the ongoing baseball season as well as the balance of the 2011-2012 basketball season. We will continue to tie up loose ends regarding the 2011 football season as well as the '12 recruiting class, then move forward to spring camp. Per usual, we are also asking for ideas for articles you want to see. We'll most likely have a few opportunities in the spring and quite a few opportunities in the summer to feature things that we may not typically get to chat about or to look into new ideas/topics affecting Clemson. We are open to new ideas, so feel free to toss us some ideas of what you would like to see.

Onto the sporting world...Clemson basketball is showing signs of light and now has a couple wins it can hang its hat on. Clemson dealt a bow to bubble team NC State, closing the month with four conference wins, two of which were on the road. Our Tigers host Va Tech this Thursday and go to Tallahassee on Sunday to cap off the 2011-12 regular season. Clemson still has a lot to play for despite a disappointing start to the season. The Tigers currently sit at 15-13 overall and 7-7 in conference play. Getting to at least 0.500 in league play is important. Also, with wins to cap the season and a couple more in the post season, Clemson has a chance to again hit the 20 win mark. While this season is a slight step back compared to previous campaigns, achieving these metrics should give this program something to build upon moving forward.

I'll say that the revival of the black #3 car was a little strange this weekend. We've seen Jr. in a 3 car displaying Oreo gear but have not seen the black 3 in well over a decade. Austin Dillon rocked the black 3 on Saturday in the Busch race and, like the trucks series in the past, looked really sharp. I still am not in favor of the three car being brought back to Winston Cup competition but will say the black three car does look nice turning laps. It was a little odd, though, to see this car without the famous Goodwrench logo on the hood.

This year's professional golf is going to be awesome. Tiger is playing better than years' past, Phil is off to a fast start, and there are a host of youngsters out there including Rory McIlroy racing to the top of the world rankings. Clemson's Kyle Stanley started his season with some exceptional play that included a victory and a runner up finish. This week's Accenture Match Play Championship is particularly enjoyable to watch just because the match play format creates a whole new viewpoint for a round of golf that often forces/allows players to be aggressive when they would not take such risk in a stroke play event. Additionally this tournament has some yahoo screaming and yelling some loony item at each tee box.

At the time of this writing, Clemson currently leads Maine 8-6 but has committed three errors on the afternoon. I'll be the first to tell you that early season baseball almost doesn't matter sans simply adding to the win total. The goal in baseball is to get hot at the right time of the year (tournament time), although playing well during the season does help the team. Clemson cannot commit three errors per game and expect to win consistently. As we approach conference play we'll be sure to focus more on the Tigers' play and where improved focus needs to lie. This is the final game prior to Clemson's annual three game series with in-state rival and defending national champion South Carolina. This year's neutral location game is played Friday evening down in Charleston.

Also, congrats goes out to The Wagon. Dude rocked a Randy Anderson/Martavis Bryant/Woody Dantzler jersey at his rehearsal dinner and blasted the '87 Clemson/Georgia game all night. Equally impressive was a cake made for the event...any Tiger fan can appreciate this edible delight. Below are a couple pics of this masterpiece in addition to the shot featured at the beginning of this article. 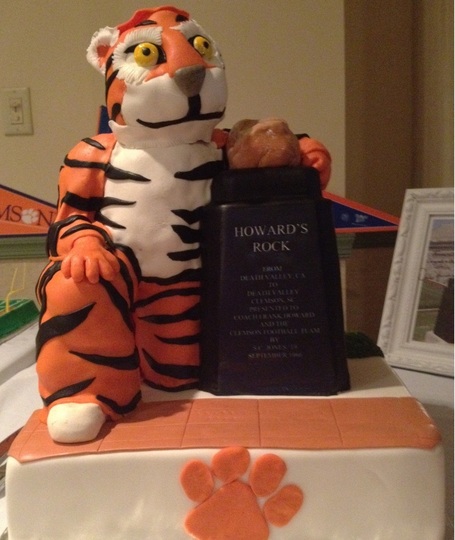 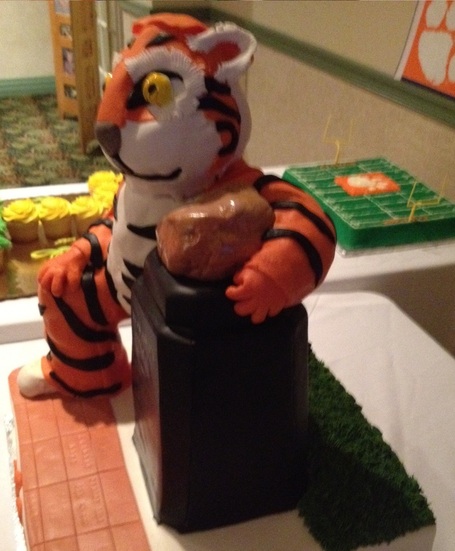 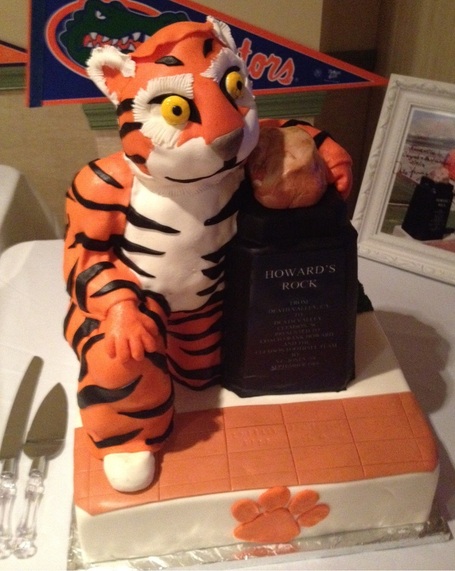