We need to compare the performance of Clemson's defense over the past 11 seasons to that of Brent Venables' squads at Oklahoma over the same time period. Previously, we looked at OU's performance under BV and compared Oklahoma's defense to Texas/other teams under similar circumstances. The data found for this post were found at http://coachesbythenumbers.com and http://footballoutsiders.com.

Here is how Clemson performed over this time period.

These numbers--particularly the ones in the middle of this timeframe--are good numbers that should allow the Tigers to be successful. Lovett even looks like a good coordinator in some of these statistical showings, though we know he is merely average at best. Also, while we never really liked Koenning's style of reactive defense, he did field a good enough defense to win games. It just turned out that his scheme tended to sacrifice late leads in games. In fact, here is how Clemson fared in terms of defensive FEI rankings from 2007 to 2010 before falling to 50th this past season.

Here is how these rankings compare to OU over the past five years. 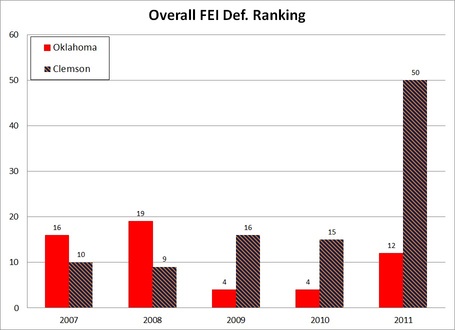 Overall, OU averaged 11th overall and Clemson 20th over this time period. The lone unacceptable season for either squad was Clemson's '11 campaign that ultimately cost Kevin Steele his job.

We showed you Clemson's per game averages from the past 11 seasons and compare these numbers to Venables' at OU through the table below. Notice that we use Venables' statistics as the baseline, so negative numbers mean Oklahoma gave up fewer yards (or whatever the statistic) than Clemson.

If you are trending at home, this data shows that Clemson was largely better defensively from '05 to '08 (under Koenning) and mostly trailed OU in other seasons, sans the 2010 campaign. See below for graphs and analysis for these categories. 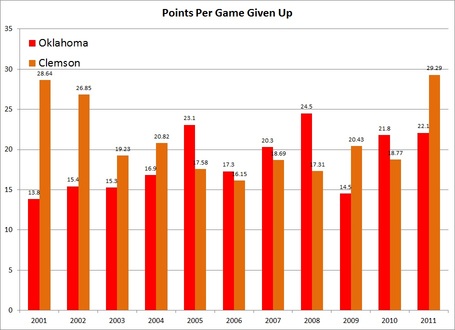 Clemson was clearly inferior to Oklahoma for six of these seasons in terms of scoring. The first couple seasons and last year's campaign were much worse than OU's. I also note that OU's worst season saw the Sooners give up 24.5 points per game. Clemson had three seasons worse than this including last season's 29.3 points per game. 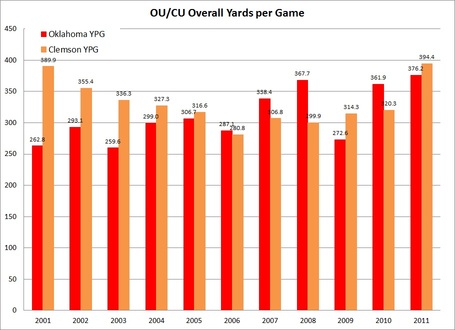 The yards per game mirrored scoring. Clemson gave up more yards that Venables' defenses in seven of eleven years analyzed with last season being the worst for either university. 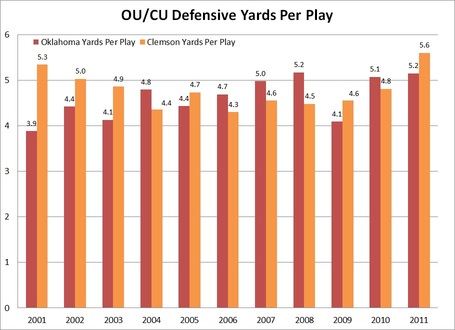 Here is how the play breakout looked since 2007: 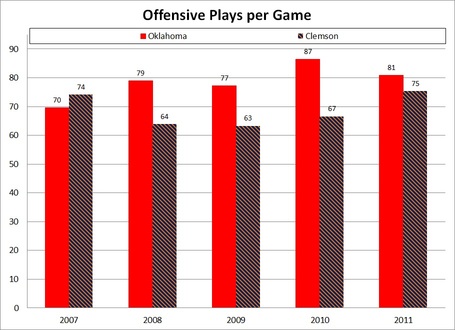 Notice that Oklahoma ran more plays than Clemson in each season except 2007 including last season which implies that OU's defense is pressed as much or more than CU's over the past five seasons. The time of possession statistics (below) show that Oklahoma was able to hold the ball longer than CU in each season except 2007. This implies, since Oklahoma runs a lot of offensive plays, that the defense is able to limit the number of first downs the opposition and gets the ball back to its offense fairly quickly. 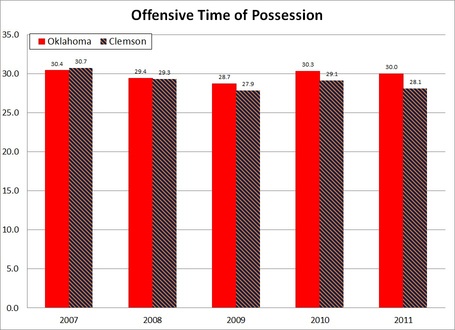 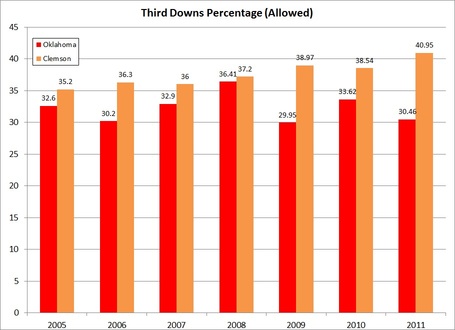 Overall, Venables and Oklahoma were better than Clemson defensively over time periods examined in this article. Further, Clemson installed the hurry up offense for 2011 and the numbers went down the toilet for our Tigers. OU, on the other hand, was fairly consistent and successful outside of some struggles in the middle of the decade. We'll be interested in seeing if/how Venables corrects issues that arose last season and (likely) are associated with the introduction of Chad Morris' offensive philosophy.