The defensive line participation numbers are quite interesting but not unexpected. We have nothing but freshmen and sophomores on the roster this year so obviously a lot of them had to play. The discussion below is solely meant to be a quantitative participation analysis and not a qualitative analysis of the season's play. We'll delve into that subject specifically after the bowl game.

We will begin with the individual items. Below are snap count numbers for all defensive linemen who played this season. 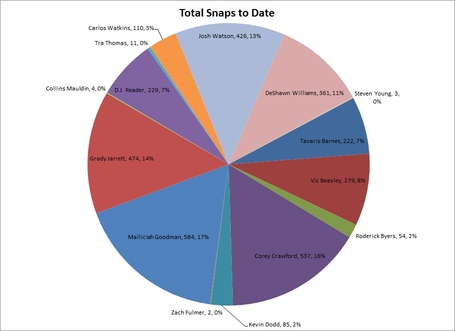 The numbers were pretty much what we all expected. We knew coming into this season that the line would be extremely young and it was. The lone upper classman to log significant snaps in '12 was Malliciah Goodman with 584. The rest of the entire line was supported by the play of sophomores with a sprinkling of freshman influence. I've broken down individual participation numbers by position (DE vs DT) below to give a bit more granularity. First we'll look at the defensive ends then move inside to see who is playing at tackle. 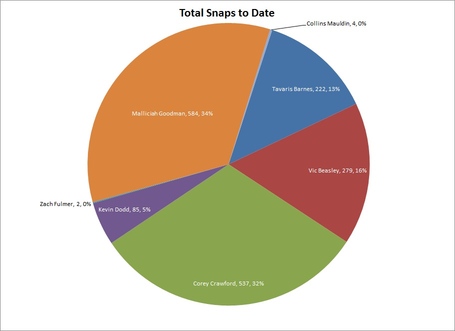 It should be expected that Goodman took the most snaps of all the ends. He is a senior, so that should be expected. Crawford took 500+ snaps and this was also of little surprise based on what everyone thought going into this season. Though we would have liked for him to develop more before logging so many snaps, the depth and talent of this line forced such high numbers. Barnes and Beasley both logged well over 200 snaps. Beasley was easily the pleasant surprise for me as he was a pinball moving from position to position before finding a home at DE. This young man has talent and if Clemson can develop him this offseason I wouldn't be surprised to see him turn into a pass rushing beast. Kevin Dodd's 85 snaps as a true freshman is about what you'd expect out of a first year guy. 85 snaps, though, makes you question whether a redshirt should have been in order. 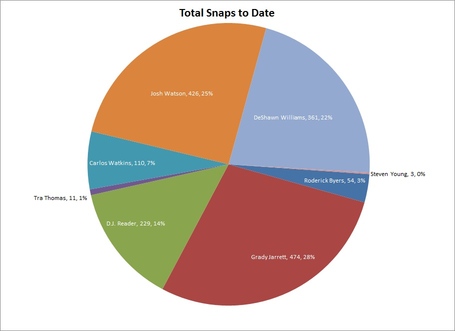 Jarrett and Watson were the two DTs who were able to log over 400 snaps with Reader (230) and Williams (360) stepping in with 200+ each. All of these players are sans Reader are sophomores and only Josh Watson had the benefit of a redshirt season. I'll also point out that true freshman Carlos Watkins had 100+ snaps. Poor roster management and recruiting strategy 3-4 years ago forced youth without redshirt experience into very significant play prematurely.

On a weekly basis, here is how the entire defensive line participation numbers looked. 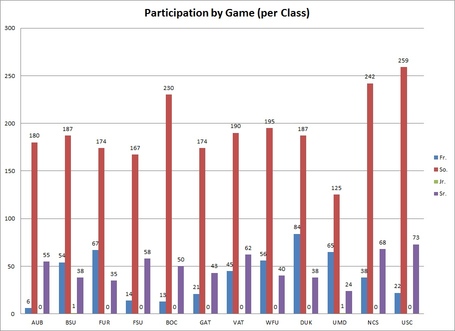 Other than some of the blowout games, each week's profile looked the same across the board. We had a ton of sophomore snaps with Goodman getting in as a senior. We were able to get more freshman involved against the Wake's and Duke's of the world--as one would expect.

Below you'll notice the overall participation numbers for the defensive line. 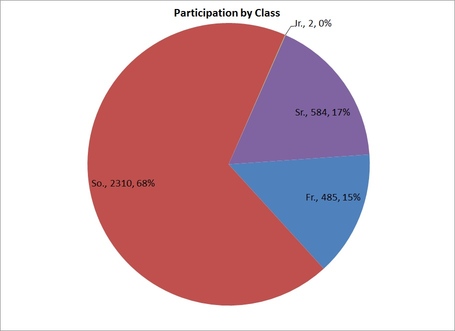 Individual graphs are not necessary as it is obvious there is Goodman who is leaving and everyone else has two to three years of eligibility remaining.

These numbers definitely make you question recruiting strategy. By refusing to stagger linemen, Clemson (A) had little quality depth last season and (B) was forced to play a very green group this season. This strategy has also hindered development as most of the young linemen on this team have not benefited from a redshirt season. This being a "participation" article, I'll refrain from too many qualitative comments other thatn to say improvement over the course of the season should have been expected given the youth and the typical learning curve college players see through career development.