We like to evaluate who is playing and who is not, and linebacker is a key area of interest for us. We will look at how the snaps are being distributed, what it meant for the '12 season, and what it implies for future campaigns.

First and foremost, I'll point you to the source data. The Clemson University AD assembles the game data and the coaches provide the participation numbers for this report. The information discussed below can be found on the Clemson Athletics website, www.clemsontigers.com. I'll note that all data shown here only reflects actual defensive stats. Special teams stats are not accumulated for this assessment though many of these players also have responsibilities on special teams in addition to their "regular" assignments.

We will begin with the individual items. Below are snap count numbers for all linebackers who played this season. 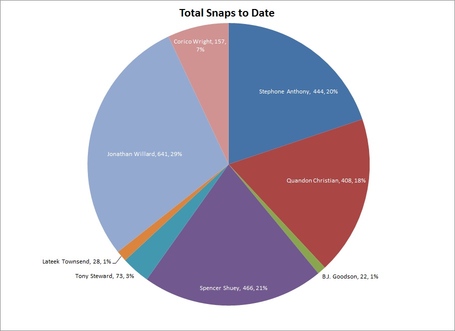 The numbers shouldn't surprise you if you watched all the games this season. Shuey, Christian, Anthony, and Willard had the most snaps. Rico Wright had a large portion of snaps. The two names that should pop out here are Tony Steward and Lateek Townsend. Both of these have avoided redshirts so far and neither has contributed greatly to the defensive effort. Steward, you will remember, was one of the tip linebackers in America coming out of high school. You'll also recall he was injured his senior season of prep play AND suffered another ACL injury last season as a freshman. This guy is clearly a very talented individual yet the staff chose not to redshirt him to play on the punt team and give him a grand total of 73 meaningless defensive snaps this season. This decision is ridiculous and a complete waste of a year for Steward and the linebacker corps. If Steward was completely healthy he should have played more. If he was not quite 100% or not ready to step in and play 150 snaps this season--some with in meaningful game situations, he should have been redshirted and brought along slowly to ensure he is in great health and contributes to this defense for potentially three years. Burning a second year of eligibility for a player of this raw talent level so that he can "contribute on special teams" is irresponsible and invokes very poor judgement.

The next question is how much experience is on the field each week and what do we have after this season. The two figures below show class cumulative snaps taken as well as those taken on a weekly basis. 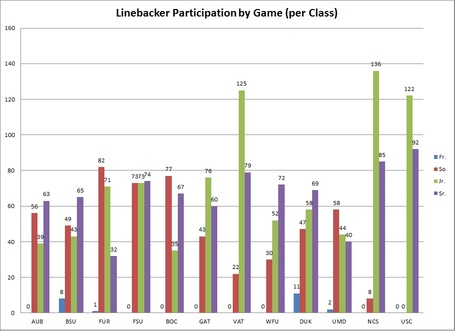 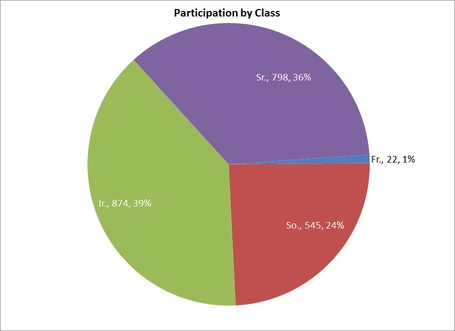 Tig Willard and Corico Wright were the senior linebackers this season. Willard played a big role in the Carolina game, as his name was called quite a bit. Willard logged 641 snaps on the season and Wright 157 headed into the bowl game. Christian and Shuey were the juniors playing a factor this year. Both of these guys put in over 400 snaps for the Tigers. We hounded Shuey for his lack of speed but repeatedly praised him for understanding the defense and getting to the proper spot more than most of the other backers. It is critical to note that the Jr's and Sr's logged 3/4 of the total snaps for this team in '12. The sophomore play was mostly Stephone Anthony. We discussed Townsend and Steward earlier, but Anthony was logged four times as many as those two combined. I will note that Anthony's snaps per game did taper off significantly as the season wore on. B.J. Goodson logged the only snaps for a freshman, though we note that he was redshirted so we understand his use this season.

Overall, we saw Anthony's snaps displaced by Shuey's knowledge of the system as the season progressed. There is little doubt that Anthony has more talent and we'll be interested in seeing if Anthony can progress in this area and take back some of these snaps next year. Christian was rotated out in passing scenarios in favor of an additional back, so it is understandable to see him get far fewer snaps than Anthony/Shuey or Willard. Tig graduates and, assuming no shakeup with position assignments, we look to see Steward with more snaps next season. It will be interesting to see how the staff plays Justin Parker or if Parker lives up to the hype he brought to Clemson out of high school.