Share All sharing options for: LSU Outside Zone Toss

LSU has a stable of very, very good runningbacks who have the ability to run a wide array of football plays. We have discussed their ability to run the ball inside. They do that very well. LSU also showed they could run outside the tackles as well and will frequently do it with a simple but effective toss play.

Intuitively, it is easy to understand how a team's ability to run inside and outside makes an offense more difficult to defend. In LSU's case, they've decided to augment their effective interior run game with a simple outside zone toss play. This play has been effective against some very good defensive ends and fast defenses this season and I'll expect to see a good bit of it Monday night.

For outside zone plays, the aiming point is the playside armpit of the defender. In combo blocks, offensive lineman on the playside of the combo block should be the one who gets to the next level. Below is an example. Notice all linemen are covered sans the playside guard.

LSU runs the outside zone toss out of the I-formation. They use the fullback in this formation to lead on the edge. This pits a fullback against the first man in space--typically a DB or linebacker.

Another item of interest with this play is the wide receiver blocking. LSU likes to have the playside receiver crackback on pursuing defenders. Often the receiver will be motioned into the formation to better position him for the crack prior to the snap. This tendency is very predictable when both the playside guard and tackle are covered and with a linebacker/SS lined up off the LOS in the "alley." When you get a crisp crackback and the fullback leads on a corner, there s a lot of loud blocks on the perimeter during this play.

Below is how is how the play is drawn up, with video cut-ups following. 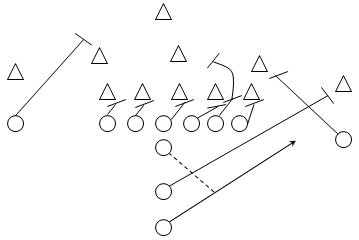 Along these same lines, LSU will run this play on the goalline and out of their short yardage sets.