LSU shows many, many items we've discussed here at STS when we talk about "big boy football." Here, we will feature a Power O and Lead Power play that LSU ran continuously over the course of the past season. We have discussed this topic before, so I will not get into the nuts and bolts of this other than a basic overview and pulled clips. I highly encourage you to check out our original piece on the power and other trap-type plays.

Teams run the power play for a variety of reasons and can be run by teams of all talent at all levels of football. Playside, all linemen downblock--typically employing some variation of Gap/Down/Backer rules blocking. What this means is the lineman will block a defender "inside" (closer to the center)...either on the lineman's inside shoulder or the gap inside the offensive lineman's stance. If there is no one on his inside shoulder nor no one in the inside gap, the offensive lineman will then move to the next defensive level (linebacker) and make a block there. The lone playside defender (on the line) who will not be blocked is the man on the end (typically a defensive end or a linebacker/safety walked up to help with run support). This man will be kicked out by the fullback. All of these items come together something like this:

Why is this scheme so impressive, you may ask. The concept of angle blocking gives the offensive linemen decent aiming points and can generate better leverage over the defender. The angle of the fullback's kickout block naturally allows him to "wall off" or "seal" this man, particularly if the defender gets upfield.

The interesting part of this play is the backside guard. He will pull across the formation and lead the back into the B-gap. To fill his void, the tackle will block down. He may get temporary help from the center who will first protect the backside A-gap and progressing to the next level through Gap/Down/Backer blocking rules. The receivers ideally attack the safety and/or middle of the field to hopefully provide a big block downfield that turns this one into a really big gainer. 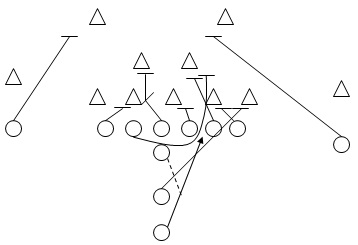 LSU adds a couple wrinkles to this play. Typically, this play is run with the QB handing the ball off to the back. LSU likes to get the back the ball with a little toss instead. LSU will run this play out of one TE, two WR formations. However, they also like to utilize a wing/H-back additionally and don't seem to care if you stack the box against them. They will use the wing to either (A) provide supplemental blocking to the base power blocking scheme described earlier or (B) use the wing to block the end man to allow the fullback to lead into the hole. The first scenario can be seen below. 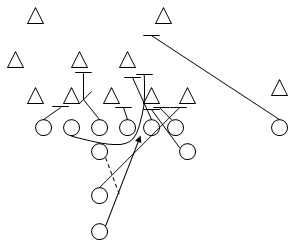 This is how LSU can turn this play into a lot of yards:

Use of the play with the fullback (and pulling guard) leading through the hole pits a big back AND a lineman against linebackers and DBs. This is an obvious offensive advantage. 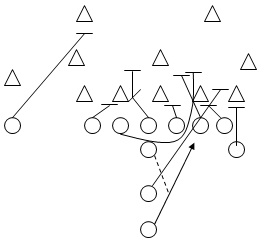 This is how it looks full speed: