Figure 1 and Table I both show an average of offensive players, defensive players, and specialist listed on the two-deep roster. Tables II through IV show the two-deep roster used for analysis along with the recruiting ratings for each player on the roster. It appears as though the Clemson AD did a little copy and paste as several players listed on the two deep will not play in Atlanta. It should be no surprise that LSU did a better job pulling in star-rated talent than our Tigers. They were definitively better than Clemson in all three areas and are by far the deepest and probably most talented team we'll see all year. 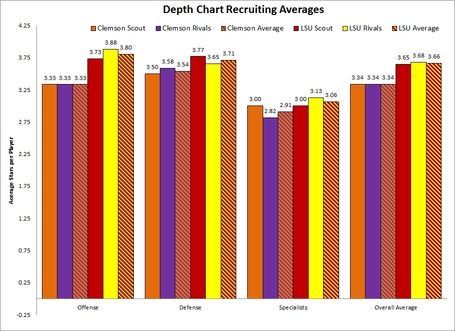