We look at who played in the backfield in 2012 for the Tigers. I'll note that Sammy Watkins was frequently motioned into the backfield but will not include his numbers. I'll also note that this analysis is solely based on the 2012 roster and quantitative snap counts...not qualitative play.

First and foremost, I'll point you to the source data. The Clemson University AD assembles the game data and the coaches provide the participation numbers for this report. The information discussed below can be found on the Clemson Athletics website, www.clemsontigers.com. I'll note that all data shown here only reflects actual defensive stats. Special teams stats are not accumulated for this assessment though many of these players also have responsibilities on special teams in addition to their "regular" assignments.

We will begin with the individual items. Below are snap count numbers for all running backs who played this season. 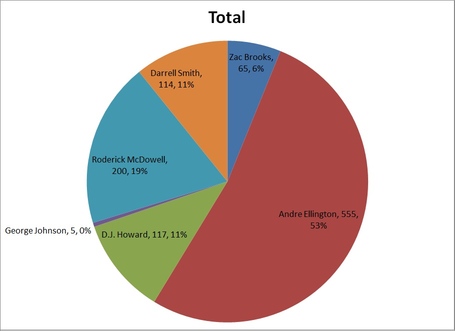 Andre Ellington was the work horse of this offense, as shown above. Ellington played more than 50% of the snaps at his position. Hot Rod had 200 snaps (roughly 20% for the group) and Howard had 117. Also keep in mind that the above figure includes Darrell Smith's fullback snaps (114). The item that should stick out--in addition to the bulk workload--is Zac Brook's 65 total snaps. This is 65 total snaps to waste a redshirt. I understand the staff was concerned following the departure of Mike Bellamy. However, the waste of a year of this young man's college career was wasted for 20 snaps against Ball State, 16 against Furman, 20 against Duke, a couple against Wake and Maryland then special teams play to cap off the year. If you are going to avoid a redshirt for a player he should either (A) play significantly or (B) you recruited him as a filler and only want him on your scholarship "books" for four years max. Brooks is not the latter, rather a stud we plucked out of Arkansas that really needed a year in a college program to bulk up. Hindsight being 20/20, he clearly should have redshirted in '12.

The next question is how much experience is on the field each week and what do we have after this season. The two figures below show class cumulative snaps taken as well as those taken on a weekly basis. 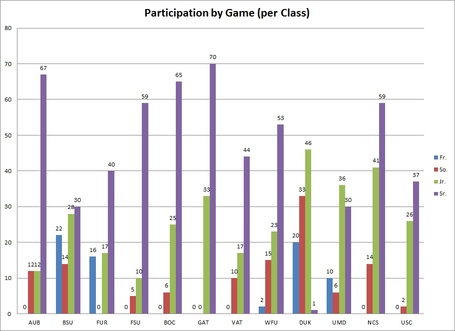 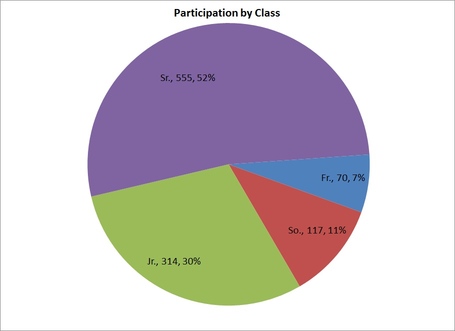 Andre Elliington's presence as the snap leader make these numbers predictable. He wasn't played as much in meaningless games and after suffering a scare against Duke. Else, Hod Rod and Smith anchored the junior class. I fully expect Roderick McDowell to enter '13 as the starter as the staff got more and more confident with him as the season moved along this year. Howard got some meaningful snaps. I'd be very surprised if the staff didn't find better ways to get Brooks on the field more assuming he adds good weight between January and September.