With the regular season behind us, let's take a final look at how the Clemson Tigers performed statistically during the 2012 regular season compared to a set of benchmarks set forth in the preseason.

Starting with the defense--even with realistic and unambitious expectations set forth (Top 40 goals, with stretch goals to get to Top 20), the 2012 version of the Tiger defense did not meet those expectations in most categories. It was certainly a season of frustration when the opponent had the ball for most of the season. The defense gave up too many big plays, didn't generate enough pressure on the QB, didn't create enough turnovers and didn't keep opponents off the scoreboard. 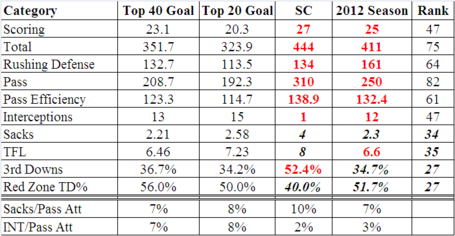 In only 4 categories did Clemson break the Top 40 threshold--Sacks, Tackles for Loss, 3rd Down percentage and RZ TD%. The last 2 certainly helped the scoring rank be in the Top 50, despite worse rankings in Pass yards, rushing defense and total yards allowed.

There really isn't a single unit on D that one can look at as a positive. Some of the younger players up front seemed to grow through the season and maybe that is a positive for 2013, but I don't think there are any game changers in that bunch--some good players, but probably not dominant ones.

On the offensive side of the ball, where expectations were exceeded in most of the categories. One category that ended far below expectations was sacks allowed--over 2 per game and 77th in the country. Part of this is due to the number of pass attempts, but not entirely as Clemson ranked 67th in sacks per pass attempt at 6%.

Overall, there is very little to complain about in terms of how the offense performed in the regular season. One concerning item is how this offense performs against the more physical, stronger defenses (read: SEC). The only two teams in 2012 to hold Clemson's offense below their scoring defense (i.e. SC allowed 21 points per game, but only 17 to Clemson) were SEC teams--the Gamecocks and Auburn. The third team that Clemson struggled against the most offensively? Virginia Tech--another physical defense (and not nearly as good as previous seasons, either and yet still held Clemson to under 300 yards of total offense). Let' hope that trend does not continue in Atlanta on New Years Eve, because if Les' Tigers hold Dabo's Tigers under 17, I'd say there is a very, very, very small chance Dabo's Tigers will win the game...or even be competitive.

Before the LSU game we'll have a run down of LSU's stats in the regular season as well as a look at some of the key statistical matchups to watch in the Peach Bowl.