We've looked at the pass catchers before here and you'll probably recall that I've often made the decision to lump the Tight Ends in with the Wide Receivers. I continue to do that with this article because (A) where to lump the TEs--particularly with the offense that Clemson runs--is sometimes difficult and (B) the TEs are often flexed out and in a two point stance which effectively turns them into a wide receiver anyway.

For this purpose, I did want to split the WRs and TEs up to show which individuals are playing for each group. The first functional group to look at is the wide receivers. 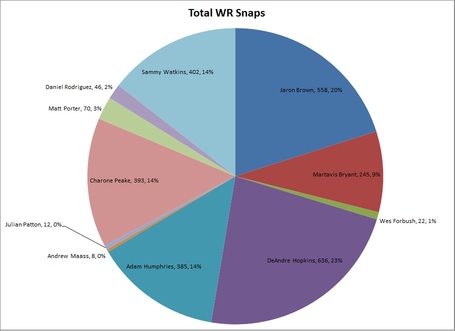 Jaron Brown, Sammy Watkkns, and DeAndre Hopkins were the three receivers with over 400 snaps on the year. I will admit that I was a little surprised that Sammy was third on the team with just over 400 receiver snaps because he missed three (3) full games due to injury and suspension. Peake and Adam Humphries each had 385 or more snaps on the season. In all honesty, I was a little disappointed in Martavis Bryant's snap count. He was injured for a couple contests but I expected him to do more with his natural abilities this season. He does nothing to help his cause by managing to get suspended for the bowl game...

The tight end play was dominated by Brandon Ford. Ford represented the tight ends with 60% of their snaps. Sam Cooper got his share of snaps and Mac Lain and Seckinger took 136 snaps between the two of them. Clemson will lose Brandon Ford this offseason and finding a guy to fill his shoes will be very important for this offense looking towards '13. 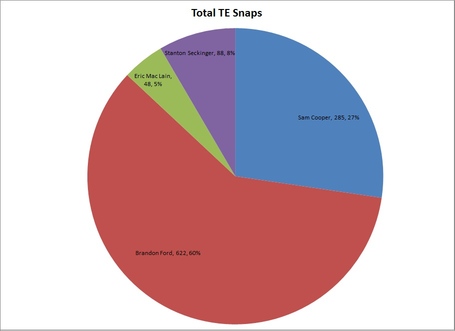 Overall, the participation per class per game can be seen below. 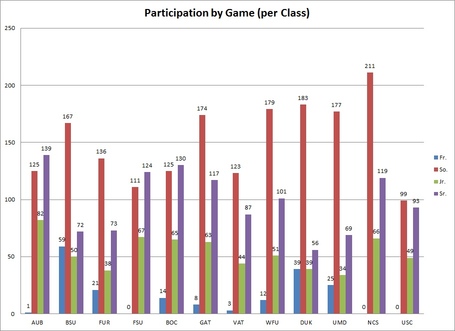 Obviously, the senior play was dominated by Brown and Ford. Else, the talented sophomore receiving class logged the majority of their snaps and Nuk provided the Tigers with the Junior snaps. 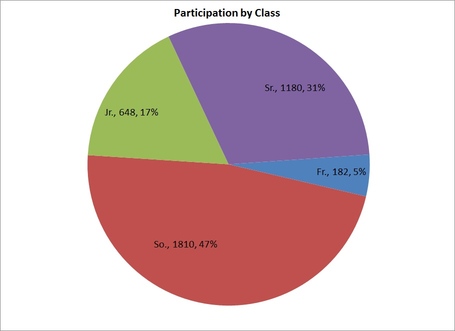 Overall, this group had another record year catching the football and the Tigers got a lot of good snaps out of their older players (Brown--Sr., Ford--Sr., and Hopkins--Jr.) along with the talented sophomore receiving class. While Clemson loses a couple reliable players to graduation, the Tigers bring back a group of players at the WR/TE position with a lot of experience--especially if Nuk decides to return for another season in Death Valley.